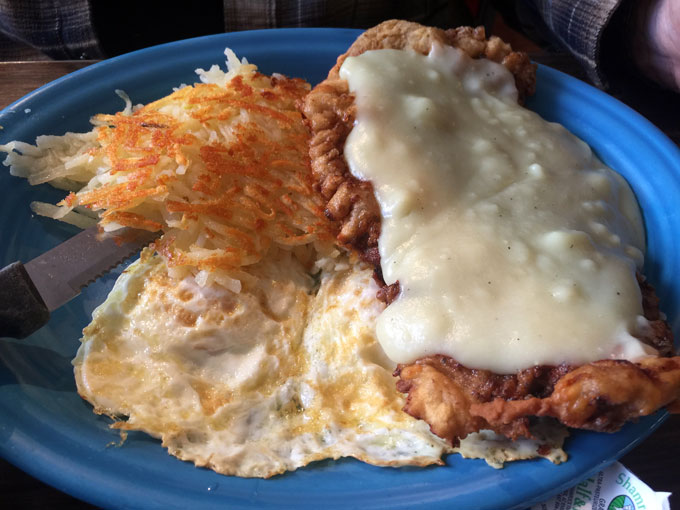 “The other night I ate at a real nice family restaurant. Every table had an argument going.”
~ George Carlin

In December, 2016 when I introduced my friend Bruce “Sr. Plata” Silver to Mannie’s Family Restaurant, the visit evoked pleasant memories of plentiful visits to similar restaurants in Los Angeles where he grew up. Flashbacks of humongous portions of delicious comfort food favorites were secondary to nostalgic recollections of happy times spent with his family. His father, who passed away recently, loved the type of food and prodigious portions served at Mannie’s. So does his loving son who, as loyal readers of this blog know, could subsist on a diet of chicken fried steak.

Since its launch in 1965, Mannie’s has been creating memories for generations of Duke City diners…and hopefully not in the fashion described in George Carlin’s quote. Many of us who grew up in the swinging 60s have our own memories of hometown diners with their sizeable menus, friendly waitresses and bottomless cups of coffee. Every time we hear the tintinnabulation of a silver spoon on a ceramic coffee mug, we’re transported to the days of yore when the fruited plain wasn’t dotted with Golden Arches and mom-and-pop restaurants ruled the road.

Mannie’s is the quintessential 60s family restaurant, some would say an anachronism. Its menu is a veritable compendium of comfort food favorites, stick-to-your-ribs dishes that will remind you that the genesis of the word “restaurant” is the French word restaurer which means to restore. Mannie’s has been restoring guests to good moods and full bellies from the very beginning. When founder Mannie Gianopoulos launched his eponymous eatery on the western fringes of Nob Hill, mom-and-pop restaurant operations were plenteous along Old Route 66, many of them owned by Greek entrepreneurs.

In 1985, ownership of Mannie’s transferred to Joe Koury whose family has been a peripatetic presence at the restaurant ever since. It’s probably cliche to say Mannie’s is one of those restaurants where everybody knows your name, but it wouldn’t be much of a stretch at Mannie’s. Guests are treated like family and regulars are addressed by name. The wait staff, among the friendliest in the Metropolitan area, has a lot of experience exchanging banter with guests. You get the feeling they’d jump through hoops to make sure you have a great experience every time you dine at Mannie’s.

Mannie’s Web site boasts “its not your momma’s cooking, but it’s the next best thing!” The restaurant’s operating statement, as eloquently expressed on the Web site is one every restaurant should strive to emulate: “Over the many years in operation, we have prided ourselves in serving homemade food made with high quality ingredients at unbeatable prices. We serve fresh homemade food complimented with fast friendly service – all at very reasonable prices. Our restaurant serves breakfast lunch and dinner and features baked from scratch muffins, cinnamon rolls and incredible homemade soup. We serve fresh, hand-made burgers, hand-cut steaks and chicken, and the best chicken fried steak around.

That statement continues: “We also have New Mexican favorites such as huevos rancheros, burritos, and the best green chile chicken soup in town. Mannies Family Restaurant provides guests with different homemade soups everyday. We also offer homemade baked goods and tasty entrees. Using the freshest ingredients in our homemade food offers the best tasting food for everyone to enjoy. This is what we believe separates our restaurant from the rest; we make great food with high quality fresh products everyday. Complemented by great service, we are one of the best values around.” Is it any wonder Mannie’s is such a beloved Duke City institution?

Mannie’s is open seven days a week from 6AM to 9PM. Free wi-fi is available throughout the restaurant. Breakfast is served all day, featuring a wide variety of options ranging from omelettes and pancakes to huevos rancheros and breakfast burritos. Mannie’s even offers beer and wine with meal and caters to all tastes with many vegetarian options available. All good, but does Mannie’s serve the best chicken fried steak in Albuquerque? That’s what Sr. Plata wanted to know when I waxed poetic about the restaurant’s memory-making menu.

The art on the wall seemed a portend that at least Mannie’s chicken fried steak would be enormous. Sr. Plata gravitated to a piece of art (a masterpiece in his estimation) in which a wide-eyed girl asks “Did you see the size of his chicken fried steak?” Not unlike the Frontier Restaurant, another venerable family restaurant, the walls at Mannie’s are festooned with art work, albeit of a different genre. You’ll want to take in all the unframed dichromatic art emblazoned with clever maxims. They’re definitely of an other era, but their sentiment is applicable today, too.

15 December 2016: Lest I keep you in suspense any longer, Sr. Plata certifies Mannie’s chicken fried steak as the best he’s had in Albuquerque with its prime competition being at Vick’s Vittles. As with all great chicken fried steak, the portion size is indeed prodigious, but unlike some it’s not pounded into a paper-thin sheet that covers the plate. This chicken fried steak is thick and tastes like steak, albeit a steak you can cut with a fork. It’s covered with your choice of cream gravy or if you’re New Mexican, with green chile. The breakfast version is served with two eggs, hash browns, toast and cream gravy. It’s a substantial and satisfying plate that put a smile in Sr. Plata’s face. He recommends asking for your extra crispness on your hash browns.

8 December 2016: Mannie’s chefs seem to have an affinity for chicken. It’s all over the menu: chicken enchiladas, chicken Caesar salad, crunchy chicken salad, Southwest chicken salad, Greek chicken wrap, chicken club, chicken fried sandwich, fried chicken and several chicken coops full of other chicken dishes. When the Web site boasts of “the best green chile chicken soup in town” this eight-time judge at the Roadrunner Food Bank’s Souperbowl has no choice but to try it. It is indeed a wonderful rendition of New Mexico’s ultimate comfort food soup. It’s got plenty of heat both in terms of temperature and in piquancy. Well-thickened and rich with bite-sized chicken, it’ll take the sting out of the cold, but will make you happy all year round.

8 December 2016: My friend Scott McMillan can’t recommend Mannie’s gyros highly enough. The New Mexican in me gravitates immediately to the Pedro’s Gyros, a New Mexico meets Greece version of the popular Greek staple. Pedro’s Gyros are described as “seasoned gyros lamb served on pita bread with chopped green chile, feta cheese, and cucumber dressing.” The green chile has a pleasantly piquant bite that would threaten to overwhelm the lamb were it not so plentiful. The rich, tangy cucumber dressing provides a nice counterbalance to the fiery green chile. After one bite I dispensed of the sole large lettuce leaf, but should have done so before snapping the photo.

15 December 2016: One of Mannie’s most popular staples is fried chicken, a whole half bird. If you’re tired of restaurant chicken the size of a hummingbird, you’ll understand one of the reasons Mannie’s chicken is so popular. The other reason, of course, is that it’s pretty darned good. Fried to a golden brown, this comfort food favorite includes a leg, thigh, breast and wing. These large meaty pieces are served with your choice of whipped potatoes or French fries. Sr. Plata took home two orders of the fried chicken where he shared them with his darling Dawn and in-laws. Not surprisingly they loved the pulchritudinous poultry.

15 December 2016: A long time ago, culinary gods must have decreed that all family restaurants, cafes and diners across the fruited plain are required to serve pancakes. Not just any pancakes. Those gods created a blueprint for pancakes that are much better than any of us can make at home–gigantic, fluffy, delicious orbs beckoning for butter and signaling for syrup. Mannie’s has that blueprint down pat! A short stack of two pancakes (pictured below) is as tall as the Tricentennial Towers on the I-40 corridor outside Old Town. Two are easily large enough to share while three will make a very filling and satisfying meal for one.

15 December 2016: Sr. Plata shares my affinity for good restaurant coffee, not the designer variety whose inherent flavors are obfuscated by fancy roasting techniques, but solid coffee with no bitterness, the type of coffee which defeats the cold. Mannie’s serves Farmer’s Brothers Coffee, a brand restaurants have trusted for generations. There’s nothing gourmet or designer about this coffee. It’s just good stuff that goes well with the variety of deliciousness served at Mannie’s.

Mannie’s has been feeding Albuquerque families since 1965, in the process creating generations of devotees all with their own old or new memories of their visits to a Duke City classic. Mannie’s isn’t just a family restaurant. It’s a hometown restaurant for families.