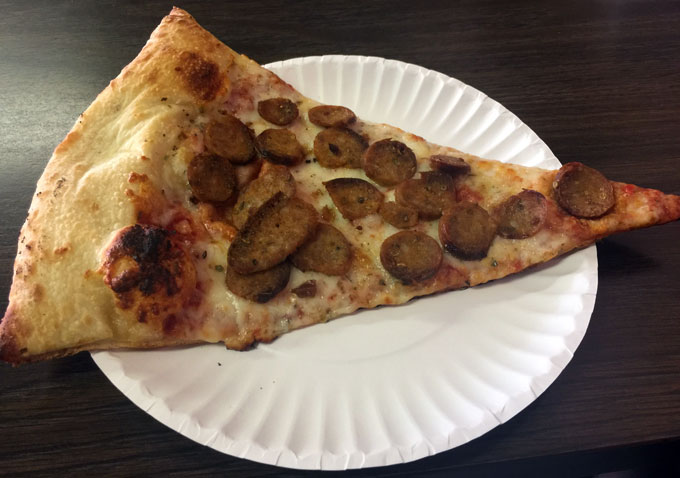 There’s nothing like a topic about which opinions are wide and varied to stir up a good old-fashioned, highly spirited debate–an exercise in the Constitutional right of free speech. One topic which has been known to elicit energized dialogue is pizza. Whether the debate is New York style versus Chicago style, thin crust versus thick crust, brick wood-fired oven versus gas oven, mom-and-pop pizzeria versus the corporate chains or even slices versus whole pie, Americans sound off like England’s Houses of Parliament on CSPAN, only with more class, dignity and intelligence. Such was the case in 2008 when the forum topic “Where Can I get a good Pizza” was introduced on Albuquerque’s most popular blog, the Duke City Fix. The blogosphere became electric with debate as Duke City pizza lovers weighed in with their opinions.

As with most debates on pizza, there was nothing approaching consensus on where good pizza could be obtained. Respondents lobbied for their favorite pizza, in some cases only to have their opinions dismissed (without prejudice, of course) by others. The topic was so wonderfully charged that it elicited a related forum topic “The Worst Pies (Pizza) in Albuquerque.” This debate also raged on with several candidates being named. Some of the pizzas named in the good pizza forum also made the worst pie list. That may be ironic, but it’s not at all surprising. Opinions about pizza really are that wide-ranging. Ultimately, the opinion which resonated most with me was that of Adelita who declared, “I’m not sure I’ve ever met a pizza I didn’t like.” Adelita, by the way, is a wonderful writer who’s been a mainstay on the Duke City Fix since its launch. I look forward to her weekly column with the same giddy anticipation of a child on Christmas morning. She’s that good.

But, I digress. One of several candidates which made both the “good pizza” and “worst pies” lists was Pizza Castle, a small pizzeria on Eubank. Pizza Castle has been tossing dough for more than a decade and like every other pizzeria in Albuquerque, has its supporters and detractors. It’s one of several Duke City pizzerias for which supporters will invariably claim “it’s the closest to New York style pizza” in town. Lending credence to that argument is the presence of transplanted Metropolis residents who frequent Pizza Castle, ostensibly for a taste like home. In every one of our visits we’ve run into New Yorkers who tell us the castle’s pizza is “just like New York.”

There are some similarities to New York City pizzerias. First of all, the slices are enormous and have the pliability (if you order a whole pie) to be folded lengthwise, the way so many Big Apple residents eat their pizza. Secondly, the sauce is slathered on generously which I like only if the sauce is flavorful–and Pizza Castle’s sauce is terrific (maybe good enough for spaghetti good). Thirdly, the dough is fresh and baked only long enough for just a hint of char on the edges. The cornicione, an Italian term for the “lip” or puffy outer edge of the pizza is soft and chewy. Best of all, the pizza dough has the flavor and aroma of just baked bread.

There’s another reason Pizza Castle’s pies are often compared with those in Metropolis. Founder Bob Labbate owned and operated a pizzeria in Brooklyn. He moved his family to New Mexico in 1971 and launched Pizza Castle nine years later. His family recipes proved very popular among pizza paramours throughout the Duke City. Labbate, by the way, was probably better known for his “other job” as the owner and operator of Albuquerque National Dragway. His family has continued to own and operate Pizza Castle which continues to garner praise–and occasional criticism (though the latter is far outweighed by the former).

In May, 2010, Albuquerque The Magazine undertook the enviable task of naming the “best pizza in Albuquerque,” a search for the city’s best pie–one slice at a time. Rating each pizza on its taste, appearance, authenticity and creativity, the magazine staff sampled two pies at each restaurant: pepperoni and the specialty pie of the pizzeria’s choice. Pizza Castle was rated the fourth best pizza in the city from among nearly forty purveyors of pizza pie. The magazine described Pizza Castle as “like one you’d find in a typical NYC neighborhood: red-boothed, unassuming, and strictly casual (with pinball machines!).

The pizza is baked in a deck-oven configuration. It bakes the pizza evenly so the edges are crispy and the rest of the pie is softer and chewy, perfect for the lengthwise fold. Quality ingredients are also a bonus. While several Duke City pizzerias offer green chile with their pies, only a couple (Pizza Castle being one of them) will ask you if you want mild or hot chile. The chile is neon green and does have a piquant bite, but any self-respecting New Mexican will consider it fairly tame. Pizza Castle also uses white onions which have a pronounced onion flavor–and it uses minced garlic.

Pizza is available in three sizes–a 12-inch medium, a 15-inch large and an 18-inch jumbo. Single slices are also available for a pittance plus a small charge for additional ingredients (and there are a treasure trove of those). Visit Pizza Castle’s Web site and you’ll find the restaurant’s motto is “Albuquerque’s Favorite Slice.” That’s because the restaurant goes through dozens of slices every day of the week. Slices are retrieved from whole pies set aside just for the purpose of being cut up into single slices. As at all pizzerias offering slices, those pies are partially baked then are finished when an order is placed. Being “twice baked” the resultant slice is a bit crispier and not as pliable as a slice from a whole pie not designated as a “for slices” pie.

The Pizza Castle also serves sandwiches: six- and twelve-inch cold sandwiches with a variety of condiments and five- and ten-inch hot sandwiches (sausage, meatball and chicken). The five-inch meatball sandwich (pictured above) is probably just a tad over its listed size though you won’t see me complaining about that. I will, however, complain (or maybe whine) about the meatballs which aren’t of the behemoth ungashtupt (that’s Yiddish for overstuffed) variety my mind’s eye recalls having had in Metropolis. Topped with melted mozzarella and slathered in marinara sauce, it’s a good meatball sandwich but it could be a great meatball sandwich with larger meatballs.

The Pizza Castle’s take-out business is booming. Could it be because there is very little ambience of which to speak? To say the building which houses the Castle is showing its age is an understatement. The counter in which you place and pick up your order is bedecked in 1960s style faux wood paneling. Red vinyl booths are in dire need of reupholstering. The time-worn carpet has been trod on heavily and is frayed and tattered in places. The ceiling tiles are stained and indecorous. Come to think of it, I’ve visited a few places in New York City with nearly the same ambiance. Okay, so maybe the Pizza Castle has as much style and panache as a castle dungeon, but one bite of a just-out-of-the-oven slice and you won’t remember what the restaurant looks like.

Whether or not Pizza Castle is home to Albuquerque’s favorite slice is a matter of opinion, but it’s an opinion shared by a phalanx of pizza lovers.