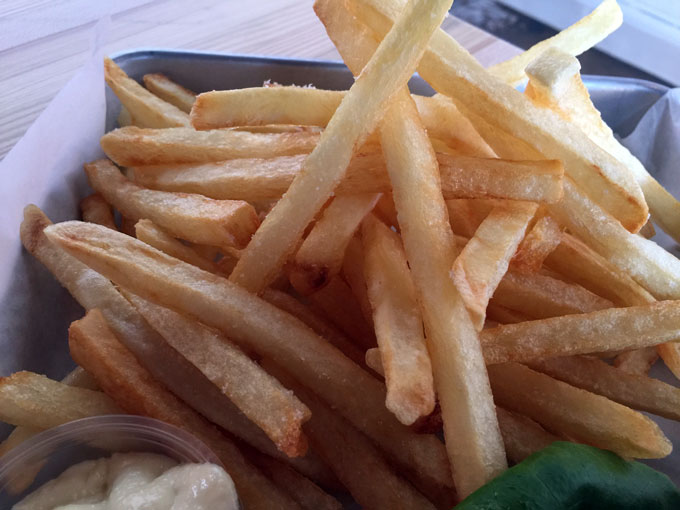 You might view my friend Schuyler’s insistence that his favorite vegetables are French fries, salsa and pizza as a fallacious premise, a non-sequitur fraught with absurdity. French fries are made from potatoes (botanically classified as a vegetable) so categorizing fries as a vegetable might not be a stretch, but pizza? How, you might ask, could any reasoning adult possibly consider pizza a vegetable? Schuyler’s argument is inspired from the beloved 1947 holiday classic Miracle on 34th Street. When ordered by the court to submit authoritative proof that Mr. Kringle is the one-and-only Santa Claus, Kringle’s lawyer Fred Gailey produced dozens of mailbags brimming with letters addressed to Santa Claus in care of the courthouse. Overwhelmed with this authoritative proof, the judge responded “Since the United States government declares this man to be Santa Claus, the court will not dispute it.”

By now you’ve probably surmised that Schuyler must have uncovered authoritative proof in the form of a governmental declaration that French fries, pizza and salsa are vegetables. Indeed he has. He points out that in 2011, the United States Congress passed a bill that allows pizza and French fries to remain on federally funded school lunch menus, essentially declaring that anything containing two tablespoons of tomato sauce (such as pizza and salsa) can be labeled a vegetable. In truth, Schuyler doesn’t really subscribe to that (or almost any) Congressional premise. Being a cynic (or maybe wiser than us all), he believes decisions such as considering pizza a vegetable prove government is a Kakistocracy (the government of a state by its most stupid, ignorant, least qualified and unprincipled citizens in power).

But he does love French fries..and he’d fight to the death to defend your right to eat them. He’s not the only one. Americans consume some two-million tons of French fries every year, an average of nearly thirty pounds per red-blooded American. About seven percent of the potatoes grown in the fruited plain end up being sold by McDonald’s which sells more than one-third of all the French fries hawked in restaurants across the United States each year. In the early 1990s, as you may remember, McDonald’s acceded to customer demand for less saturated fat and converted the oil in which it prepares its French fries–from beef tallow to a “vegetable oil” amalgam.

Not everyone appreciated this change. Schuyler certainly didn’t and neither did television chef and author Julia Child who did more than anyone else in the culinary arena to demystify sophisticated French cuisine for mainstream Americans. Here’s what she had this to say about McDonald’s French fries: “When they first started out, their French fries were very good. And then the nutritionists got at them. It turned out to be erroneous that tallow fat was bad and lard was bad and so forth. So they changed it to some kind of nutritionist oil and they’ve been kind of limp ever since. I never really eat them which is too bad and I always am very strong about criticizing, hoping maybe they’ll change.”

While it’s probably too late for McDonald’s, Schuyler will be happy to read about an Albuquerque restaurant which hasn’t (as he would term it) “succumbed to pressure from nutritional Nazis.” That restaurant is Pete’s Frites whose Facebook page proudly boasts “I think our fries are pretty special. We take a lot of time and pain in preparing them. We also have our not so secret oil, beef tallow, that takes them over the top.” Schuyler will also be happy to learn that Pete’s Frites has the “Break the Chain” seal of approval from my friend Ryan Scott, one of my most trusted sources for recommendations on where to go (no, not in that way) and what to eat.

In between bites Ryan texted me to let me know about his latest find, a Santa Fe food truck turned brick-and-mortar enterprise on Nob Hill occupying the former home of Restaurant: Impossible alum Shade Tree Customs & Cafe just west of Carlisle. He described it as “really, really good…worth a Gil review.” Ryan’s not a man prone to hyperbole unless discussing the Denver Broncos or Texas barbecue, so when he uses “really more than once as a modifier for “good,” you can bet Pete’s Frites are almost as good as a Trevor Siemian touchdown.

Launched in September, 2016, Pete’s Frites specializes in the second part of its marquee–“frites” which you may know is what French fries are called in France and Belgium. You wouldn’t expect a restaurant named Pete’s Frites to use some homogeneous out-of-a-bag fries. Instead, Pete’s hand peels and cuts its potatoes daily then triple cooks them in the aforementioned beef tallow to achieve perfect Belgian-style frites. Pete’s Web site boasts of house-cut fries which is “crunchy on the outside and mashed potatoey on the inside.” Each frites order comes with one homemade specialty sauce: mayonnaise housemade with lemon; aioli, mayo for garlic lovers; spicy mayo with habanero-based pili pili sauce; spicy ketchup with a kick; and fry sauce (Ketchup and house-made mayo).

Few restaurants across the Duke City serve truly memorable fries worthy of adulation and certainly not worth an extra half-an-hour or more on the treadmill. Until Pete’s Frites, there hasn’t been a single restaurant intrepid enough to showcase French fries as its featured fare. So, does triple-cooking in beef tallow make that much of a difference? Absolutely! The time-intensive process is scientific in its approach, but artful in its delivery. Quite simply these are the very best frites (or fries if you prefer) in the metropolitan area, delivered as promised with a delightful crispy-crunchiness on the outside and cloud-like fluffiness on the inside. You’ll run out of the housemade sauce (the aioli is terrific) before you run out of fries, but these fries stand out on their own, needing absolutely no amelioration.

Much as he loved the fries, it was the burger which excited Ryan most. Pete’s boasts of premium, all-natural New Mexican beef with no hormones and antibiotics. Best of all, the proprietary blend with a beauteous balance of fat and lean is ground daily on the premises. Complimentary toppings include lettuce, onion and tomato, but for a pittance you can add Cheddar or American cheese and (or) green chile. Each burger is prepared “smash style” which means the beef is mashed onto the grill, a process which often leads to desiccated burgers. Not so at Pete’s Frites where each burger is a multi-napkin, chin-drenching affair. Bun integrity goes out the window if you order a double patty burger which is “release the floodgates” juicy. Four-ounces of beef make up a single patty burger.

Ryan recommended an “Oklahoma-style” smash burger (not on the menu) which I assumed was prepared in the manner made famous by Johnnie’s Grill in El Reno, Oklahoma. At Johnnie’s, a spatula wielding grill cook obviously well practiced in the craft mashes thinly sliced yellow onions with raw, thin, hand-formed patties, alternately grilling each side to ensure uniformity of onion dispersion. Caramelized onions adhering to the meat patty are then placed on a bun. Pete’s version is more akin to lots of grilled onions atop the beef patty. That’s a good way to go, too. Pete came out of the kitchen to ask if the green chile was too hot (you may as well ask the devil if Hell is too hot). For this volcano-eater, the green chile had a pleasant piquancy, but was certainly not too hot. Your opinion, of course, may differ.

Pete apprised me that the menu will be expanding soon with more options coming. Apparently diners can’t live on fries alone…though Pete’s are so good, you just might be willing to try, but then you’d miss out on a superb burger. You don’t want to miss out on the Pete’s Frites experience!