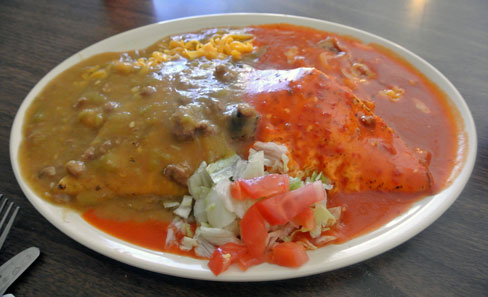 As with any city of comparable size, many of Albuquerque’s most popular dining destinations are clustered in neighborhoods bustling with commerce and activity. You could say there’s a well-beaten–and well-eaten–path to these neighborhoods. Chain addicted diners know they can find their favorite Madison Avenue sanctified corporate megaliths on the frontage roads flanking I25 as well as in the Coors Bypass area.

For a more vibrant and roguishly in-vogue dining experience, Duke City residents head for Nob Hill where swanky upscale restaurants and venerable cafes co-exist harmoniously on America’s Mother Road. Downtown Albuquerque purports to be the “economic, social and cultural center of New Mexico.” With more than 70 restaurants and cafes and a night life as hot as Hatch green chile, it has become a popular destination for more than dining. For culinary diversity, it’s hard to beat the University of New Mexico area in which restaurants with a broad socioeconomic appeal are congregated. Aside from academic enrichment, this area is nurturing a refreshing open-mindedness toward the cuisines of the world.

Strewn throughout the Duke City’s vast expanses are also pockets of edible excellence–restaurants of all types which don’t necessarily fit the neighborhood template of “x” number of restaurants clustered together. These isolated islands of deliciousness are often the most true dining destinations because they are intended dining destinations. Diners intend specifically to dine at these restaurants, not at a restaurant in a particular Duke City neighborhood.

Albuquerque also has more than its share of restaurants which are frequented almost exclusively by residents of the neighborhood. These are often the hidden gems ignored by or unknown to the teeming masses. One such hidden neighborhood gem is Leroy’s New Mexican Restaurant on Old Coors. I must confess to not ever having heard of this off-the-beaten-path treasure until alerted to it by Aza Chavez, a faithful reader of my Web site. Aza e-mailed me in May, 2008 with the exciting news that she had found “possibly the best little New Mexican restaurant in Albuquerque” whose chile is “by far the best around,” the salsa is “perfectly seasoned with the right amount of kick” and the sopaipillas are like “little pillows of heaven.” Who can pass up an invitation like that?

The Old Coors area remains a haven for the independent entrepreneur–carnicerias and llanterias abound. Leroy’s New Mexican Restaurant is situated on the west side of Old Coors with solely one sign to alert you to its presence. Save for an Open/Closed sign, the restaurant’s windows give no indication that this is a restaurant. In fact, it could easily pass for a private residence.

Leroy’s has been open since 1982 and is still going strong as it approaches its fourth decade. When Leroy Jaramillo laments that he’s having to pass on his increased costs to his faithful customers, you get the feeling that it’s really hurting him to have to do so. Leroy, an avuncular gentleman bids you a warm welcome to his restaurant and treats his customers like friends and neighbors. Make that comadres and compadres, an even more friendly term of endearment. You’re not likely to see too many white-collar types at Leroy’s. This is a working person’s restaurant where topics of conversation tend to center around cars, guns and family.

His restaurant is relatively stark save for the front dining room in which hang several signed photographs of local ultimate fighters and boxers including the pride of the Duke City, Hollywood Holly Holm. An endorsement from Holly carries a lot of weight with me. The menu is replete with New Mexican favorites. You won’t find fajitas (Texan) or chimichangas (Arizonan) on this menu, but you will find an a nice selection of burritos, enchiladas, stuffed sopaipillas and carne adovada.

As at most New Mexican restaurants, the salsa is the most piquant item at Leroy’s. It’s a rich red salsa as good as you’ll find in Albuquerque and it’s plenty piquant. Don’t dare reach for water, however. Trust me on this–the salsa should be paired with Leroy’s steaming hot coffee (and that doesn’t mean adding a spoonful of salsa into the coffee or vice-versa). Coffee accentuates the piquancy of chile while the chile seems to gain heat. The chips are low in salt and crispy.

13 June 2008: Enchiladas are normally served stacked three high, but you can also talk the accommodating wait staff into serving you a combination enchilada plate with one of each carne adovada, beef and cheese stuffed enchiladas, served rolled. Ask for “Christmas style” so you can sample both the red and green chile. The red chile is a deeply rich red. Ask Leroy where the chile comes from and he’ll tell you “Nelson’s” as in Nelson’s Meats, a neighborhood treasure about a mile away. The chile is pleasing to the eye and to the palate with a tongue-tingling piquancy that will bring a glisten to your brow. This is red chile the way it’s been made in New Mexico for generations. There is nary a hint of cumin on this chile, a fact I appreciate greatly.

13 June 2008: The carne adovada is very nice–tender tendrils of shredded pork marinated in crimson chile made from pods. Like chile made from pods at many New Mexican restaurants, you’ll find an errant seed or a sliver of peel, but it’s still a wonderful chile…and that pork is as tender as a delicious kiss on your lips. The only thing wrong with this carne adovada is that there isn’t enough of it.

Lunch plates are offered with your choice of two from among beans, rice and papitas. The beans are topped with shredded Cheddar cheese and are somewhat soupy, but in a good way. The papitas are terrific–sliced potatoes with just the right amount of saltiness for flavor. They’re like really good French fries only served in cubed halves. Plates also include two sopaipillas. I can’t do any better than Aza’s description of “little pillows of heaven.” Open them up and little wisps of fragrant steam escape to tantalize your nostrils as they beckon for honey.

27 May 2014: Breakfast at Leroy’s is an excellent way to start the day. The behemoth breakfast burrito will clear away any latent cobwebs with a generous endorphin boost courtesy of a superb chile. The green chile is the color of bean juice, but there’s no mistaking the inimitable flavor which bites back. Flecked with ground beef, it’s a magnificent green chile even if it’s not completely green. The breakfast burrito is engorged with those fantastic papitas and topped with shredded Cheddar cheese along with both red and green chile (you’ve got to go Christmas) so good it may bring tears to your eyes. Leroy’s puts to shame the seventy-five percent or so of the New Mexican restaurants in the Duke City which dumb down their chile, but Leroy’s isn’t solely about heat. This is a delicious chile and if you ask for it “smothered,” it’ll cover your plate generously.

27 May 2014: Who can resist a breakfast sandwich called the McLeroy? The McLeroy is basically a fried egg sandwiched between thick slices of jalapeño sausage and toasted white bread. For good measure, it’s served with your choice of red or green chile (go for the green). By itself the sandwich is quite good. Dip it into the green chile and it’s akin to a religious epiphany. Seriously, the green chile is sabroso y piquante.

Leroy’s is open only for breakfast and lunch, closing at 2:30PM. It may not be in one of the anointed, restaurant-rich neighborhoods, but it’s worth a visit from your neighborhood.