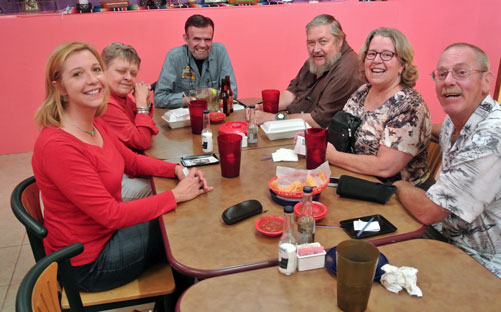 On Thursday, 29 May 2014 at 7PM, nineteen of the Duke City’s most passionate gastronomes enjoyed a sumptuous repast and a terrific evening of convivial conversation and humor in the second Friends of Gil (FOG) dinner of 2014. There were no strangers at the event, only friends who hadn’t met in person. Guests included some of the most prolific commentators on Gil’s Thrilling (And Filling) blog. With comments such as “so, you’re Larry McGoldrick,” guests had an opportunity to put names to a faces. It was as if we’d all known one another for years.

There was widespread speculation as to whether or not infamous commentator Suzie Queue was among us. Most agreed that Suzie Queue is a nom de plume and theories as to her true identity–ranging from Edward Sung to Sr. Plata and even Bob of the Village People–were advanced. In John Baldwin and his lovely bride Zee, Gil found kindred spirits equally passionate in their dislike of cumin.

Attending his first FOG event, Jeremy Cox shared news of the “soft launch” of the Fubelly site for Albuquerque. Fubelly is a revolutionary video platform that uses a beautiful storytelling concept showcasing some of the Duke City’s very best restaurateurs to help diners engage with food and drink. Through Fubelly you’ll discover places you’ve never been and rediscover places you already love by learning more about them.

The Friends of Gil II dinner was so thoroughly enjoyed that by evening’s end the most pressing question was “when’s the next one?”. Mary Ann Spencer, a long-time friend of this blog, volunteered to organize FOG III. Stay tuned to this blog for more details…and if you have ideas as to where the event should be held (preferably at a restaurant with a private dining room), please share them here.

Many thanks to the svelte and slender Bruce “El Bruto” Schor for organizing FOG II and planning a menu that wowed one and all.