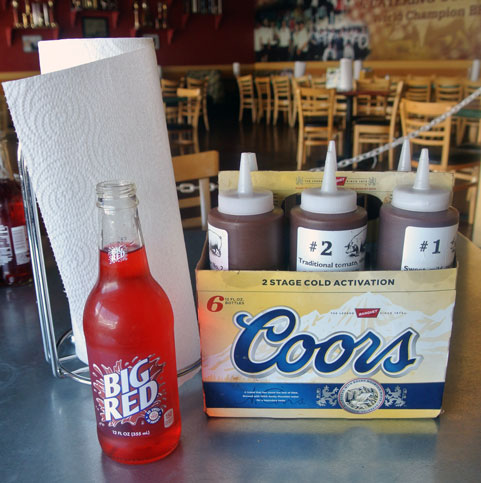 While the etymology of the expression “whole hog” appears to be American, its progenitor is actually an English slang word. Americans in the new world employed the slang use of hog as a word for dime, intending the term to mean “spend the entire coin at once.” The word hog had been previously used in the Mother Country as slang for a shilling and came from the depiction of a hog on one side of the English coin.

To barbecue fanatics, however, the term “whole hog” can only mean one thing–the whole hog category in Memphis in May, the annual world barbecue championships in Memphis, Tennessee, an event which has been called the “Superbowl of Swine.” If you win the whole hog category in Memphis, you have every right to call yourself the very best in the world. It means you’ve mastered ribs, pulled pork and sausage–virtually snout to tail.

When we saw a restaurant on Cerrillos Road billing itself as the “Whole Hog Cafe,” we wondered if it was an audacious pretender to the pinnacle of pork or the real deal. The restaurant’s trademark image of a portly porker subtitled “World Championship BBQ” cued us in to the fact that its ‘cue just might have the porcine pedigree to call itself Whole Hog.

Based out of Arkansas, the Whole Hog Cafe is but one of five restaurants listed in Fodor’s Travel Guides as “Don’t Miss” as you travel through the Razorback state. Aside from the original restaurant in Little Rock and satellites in Arkansas, only Santa Fe, Albuquerque (as of December, 2007), Cherry Hill (New Jersey) and Springfield (Missouri) can boast of a Whole Hog Cafe, all licensed franchises of the original. The Santa Fe restaurant launched in the summer of 2006 and has been pulling ’em in like the pulled pork on the menu.

True to the restaurant’s name, pork–porcine perfection Memphis style–is the specialty of the Whole Hog Cafe, but that’s certainly not all you’ll find. Whole Hog also offers chicken and beef brisket you wouldn’t be ashamed to serve in Texas where beef is king. The restaurant isn’t a slouch at sides either, offering a number of complementary dishes you’ll enjoy.

One of the essentials Texans and Southerners order with their barbecue is Big Red soda, a bright red cream soda with effervescence and personality. It’s a beverage tailor-made for barbecue. The other essentials are already at your table: a roll of paper towels (you’ll be using up several of them) and a six pack of barbecue sauces, each numbered. There’s another sauce, but you have to request it at the order counter where you’ll be cautioned that the “Volcano” sauce is enjoyed at your own risk. It’s pretty incendiary stuff.

Sauce number one is sweet and mild with a molasses flavor. Sauce number two is a traditional tomato and vinegar sauce and is slightly tangy and acidic. Sauce number three is a spicier version of sauce number two. The fourth sauce is more traditionally Southern and features vinegar and spices. The fifth sauce is sweet with a heavy molasses flavor. It is practically lacquered on when applied to baby back ribs. The sixth sauce is reminiscent of the sauce you’d find in the Carolinas with a basis of rich mustard and vinegar. It’s better than some of the best mustard-based sauce we’ve had in the Southeastern states.

Purists will tell you that great barbecue doesn’t need sauce if it’s redolent with smoke and dry rub spices. The Whole Hog’s meats certainly don’t need sauces, but it’s fun and adventurous to experiment with various sauce and meat combinations. After an April, 2014 trip to Charleston, South Carolina, I couldn’t get enough mustard and vinegar-based sauces. Sauces, like meats, are a matter of personal preference.

So are sandwiches. Unless you request otherwise, Whole Hog sandwiches are topped with a sweet coleslaw. This isn’t just Memphis style barbecue, it’s the way barbecue is prepared in Arkansas. It’s the way former president Clinton loved his barbecue as depicted in a photograph near the restaurant’s entrance. Sandwiches come in two sizes–regular and jumbo. Each is abundantly packed with juicy, flavorful and fork-tender meat–either pulled pork, beef brisket, pulled chicken or pork loin. Each is smoked to perfection for fifteen hours after a delicate application of dry-rub spices.

The pulled pork sandwich is something special. Shredded, smoky bits of pulled pork marry with the sweet and tangy coleslaw and the sauce of your choosing to form a two-fisted, mouth-watering sandwich you’ll remember long afterward. The pork is so full-bodied, you can almost imagine it as a carne adovada. For being a Memphis style barbecue restaurant, the Whole Hog would do Texas proud with its rendition of a beef brisket sandwich replete with fork-tender sliced beef.

The most prodigious plate on the menu is fittingly called The Whole Hog Platter. Large enough to feed a small family, it includes a triumvirate of smoked meats: pulled pork, beef brisket and baby back ribs (four bones) along with three sides–beans, potato salad, coleslaw and a dinner roll. The ribs can’t be describe as “fall of the bone” tender which isn’t a bad thing as sometimes that means they’re overdone. The meat does come off the bone rather cleanly and easily with minimal effort. The ribs are meaty, tender and smoky.

The beef brisket and pulled pork are both redolent with spice and smoke. They’re tender and moist, the perfect vehicles for any of the sauces if you’re in a saucy mood. Whole Hog’s pulled pork and beef brisket are the type I refer to as Ivory Snow in that they’re 99 and 44/100 percent pure. You won’t find any fatty or sinewy meat here, but that type of meat is exactly what people love about restaurants such as Arthur Bryant’s in Kansas City. Whole Hog’s barbecue also doesn’t give you a whole lot of smoke, merely enough of a hint to leave your mirthful, another attribute of outstanding barbecue.

The half chicken plate is a paragon of poultry perfection, a panacea for patients suffering from (or enjoying) Alektorophilia. Within a half chicken, you’ll find both white meat and dark meat all within a thigh, breast, wing and leg. Mildly flavored and not as smoky as other meats, it nonetheless features flavor which can’t be cooped up. If you must insist on a sauce, might I suggest the number six, a rich mustard and vinegar sauce reminiscent of the sauces served in the Carolinas.

The menu features only a few desserts: brownies, cookies and banana pudding. The latter is what the great South is famous for and a good choice. It comes in a small bowl and the portion size isn’t quite big enough for two to share. The banana pudding is served cool, but not enough for your teeth to chatter. The vanilla wafers are certainly more assertive than you might be used to.

Santa Fe is one of America’s very best restaurant towns, but it isn’t known for barbecue. In recent years only the Cowgirl BBQ & Western Grill has seen much success as a barbecue restaurant. Successive years (2006 and 2007) saw the launch of two barbecue restaurants–Whole Hog Cafe and Josh’s Barbecue (reopened in 2010 as The Ranch House)–which might put Santa Fe on the barbecue map. It’s much closer than Memphis.