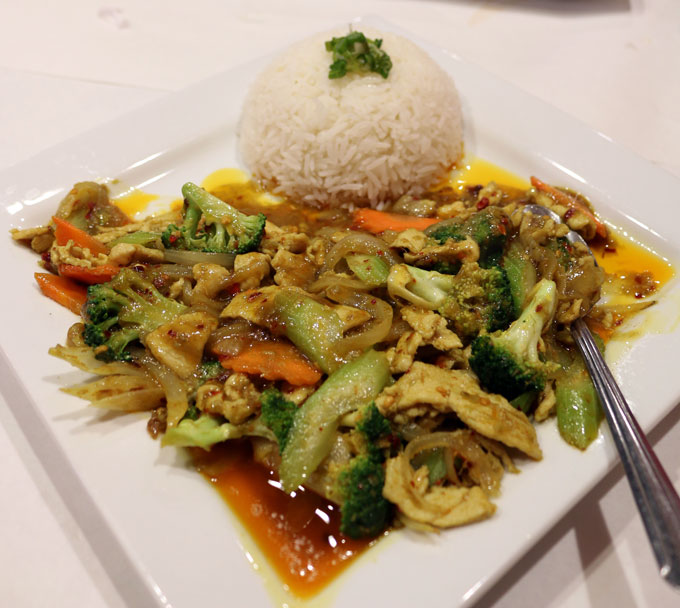 Several years ago and much to the surprise of the proprietor, I ordered a durian shake at a Vietnamese restaurant. She proceeded to caution me that durian has a very powerful aroma and flavor many people find off-putting. When she witnessed my enjoyment of the cold pungent fruit beverage, she gave me a big hug and told me I was the “only white boy” she ever saw who delighted in the odoriferous nuances of what is known widely as “the world’s stinkiest fruit.” Indeed, durian is one of the very few things in the world Travel Network celebrity chef Andrew Zimmern cannot eat. Its sulfurous emanations have been likened to body odor, smelly feet, rotten onions, garbage and even decomposing corpse.

It was deja vu all over again (as Yogi Berra once said) when I visited Le Bistro Bakery & Vietnamese Cuisine with my good friends Larry “the professor with the perspicacious palate” McGoldrick and the Dazzling Deanell. When I ordered a durian smoothie, shock and awe registered in the face of proprietor Mindy Nguyen who proceeded to warn me that durian has a very strong flavor, a flavor my well-traveled friends had never before experienced. Much to my own surprise, Larry and Deanell both loved the fusty flavored drink, neither of them finding it especially malodorous. For years I’d proudly worn a badge of honor as the “only white boy” to enjoy durian. Now Larry and Deanell join me in a rather exclusive club. We all received hugs from Mindy who must have marveled at our intrepidity (or foolhardiness) for even trying the durian smoothie, much less enjoying it so much.

In a spirit of full disclosure, durian shakes and smoothies are rather tame compared to extricating the pulpy flesh from its spiky host and eating that yellowish flesh unadulterated. My first experience with durian occurred in Massachusetts when my friend Fred, an Air Force veteran who had served in Vietnam and was married to a beautiful Vietnamese woman, essentially dared me to try it. He was stunned that I not only didn’t gag at being in the proximity of durian, but genuinely enjoyed it. His wife hugged me. Hmm, do you see a pattern here?

If there’s one trait most Vietnamese restaurants share, it’s that the aromas emanating from the kitchen are absolutely alluring. Even though Le Bistro offers the pungently potent fruit in smoothie form, the most prevalent bouquet–even before you enter the bistro–is that of baking bread. One whiff will trigger wonderful memories for those of us who grew up with moms baking the staff of life. As the marquee notes, Le Bistro is a bakery as much as it is a restaurant. It’s the bakery side of the 4,500 square-foot edifice you’ll step into and where you’ll immediately be enveloped by addictive aromas. A brightly illuminated menu board complete with food porn quality photos lists some ten banh mi, the incomparable Vietnamese sandwiches that are taking America by storm.

The restaurant side of the complex is inviting and beautiful Framed photograph-quality paintings of pulchritudinous Vietnamese women festoon the walls. Tables are adorned with white tablecloths, a centerpiece of which is a condiment caddy with such Asian food ameliorants as Sriracha and soy sauces. Seating–tables and booths–is as comfortable as it is functional with good spacing between tables. Le Bistro is an attractive venue. Service is genial and warm. Both our server and the perpetually smiling Mindy answered all our questions about the menu, exercising great patience when we (mostly Deanell and I) couldn’t decide what to order.

3 August 2016: We continued to peruse the menu as we enjoyed our appetizer, listed on the menu in both Vietnamese (Wonton Ga Chien) and English (chicken fried dumplings). Served six per order, the dumplings are engorged with minced chicken which is seasoned well. Enjoyable as the dumplings are, the real palate-pleasing aspect of this starter is the dipping sauce, a wonderful departure from the seemingly de rigueur soy-based dipping sauces served ad-nauseum with dumplings. Le Bistro’s alternative is a reddish-brown (likely from tamarind) sauce with a light syrupy consistency and balanced flavor notes of sweet, savory, tangy and piquancy.

3 August 2016: Larry’s selection, as it was when we visited An Hy Quan was a stir-fried noodle dish (Hu Tien Ap Chao) in the shape of a crispy, crunchy bird’s nest. Concerned with maintaining his svelte physique, before ordering Larry verified that stir-fried doesn’t mean a long, luxurious bath in hot, calorific oil. Instead, the pre-fried noodles are flash fried–just momentarily immersed and quickly extricated from the oil then served with fresh garden vegetables (onions, broccoli, cabbage, celery and carrots), shrimp and a sauce that reconstitutes the noodles. Larry loves this dish and raved about Le Bistro’s version. He even ate the broccoli which he usually enjoys about as much as President George H. W. Bush did (which means not at all).

3 August 2016: For Deanell, a vermicelli noodle dish with shrimp and grilled pork called loudest. The grilled pork, marinated with the sweet spices of anise and cinnamon and possessing a pronounced grilled flavor, is delicious and Le Bistro doesn’t scrimp on portion size. Douse the entire dish with nuoc mam, a delightful Vietnamese fish sauce, and even the vermicelli noodles come to life. The dish also includes chopped and whole peanuts and fresh vegetables (bean sprouts, lettuce, cilantro and mint leaves and scallions). It’s served in a swimming pool-sized bowl, but is so good you may not be able to stop yourself from eating it all.

3 August 2016: My Kim would have been proud of my choice. Listed on the menu as steamed vermicelli with grilled pork, shrimp and pork sausage, the vermicelli noodles are often called “patter noodles” which don’t really seem to be noodles at all. In fact, they’re more akin to one large rice noodle sheet in a cheesecloth pattern. The grilled pork shrimp and pork sausage are topped with crushed peanuts and scallions. As we learned at the legendary May Hong, it’s traditional to wrap the proteins first in patter noodles then in lettuce leafs with cilantro and fresh basil leaves inside. These lettuce wraps are then dipped in Le Bistro’s terrific fish sauce. Only the pork sausage lacks personality.

In attempting to convey that a dish is habit-forming, some print and online critics you may have read use the despicable metaphor “it’s like crack.” In comparing food to crack, an exaggerated, more colorful way of saying that a food is addictive, perhaps those misguided critics are trying to be funny. Perhaps they don’t have the vocabulary to better describe just how delicious a dish may be. Why not say a dish is instantly gratifying, maybe even habit-forming? One such dish is the papaya salad as prepared at An Hy Quan, one of my favorite dishes thus far in 2016. We’ve had papaya salad at several Thai and Vietnamese restaurants, but none better than at Albuquerque’s best Vietnamese vegetarian dish.

29 October 2016: Le Bistro’s version of papaya salad with shrimp and grilled pork is quite good, albeit very much on the sweet side. Where An Hy Quan’s version acquires its invigorating properties from tangy limes, it’s the fresh basil and a few flecks of chili on Le Bistro’s version that cuts through the sweetness and lends a modicum of balance. Matchstick-like slivers of papaya resembling noodles are tossed with fresh basil, chopped peanuts and ground chili in a shallow pool of fish sauce that’s very much the culprit behind the salad’s cloying notes. If you like shrimp, you’ll appreciate that this salad includes both fresh and dried shrimp as well as grilled pork.

29 October 2016: Unlike Thai curry which is bound with coconut milk, Vietnamese curry is bound with broth, making it much lighter and not nearly as sweet as its Thai counterpart. Also unlike other curries in Southeast Asia, Vietnamese curry is more stew-like with the curry serving a more supporting role to fresh vegetables and meats. You’re not likely to find Vietnamese curry served in bowls ready to be spooned into your eagerly awaiting mouth. Instead, you’ll likely find it plated with a myriad of other ingredients. Le Bistro’s chicken curry, for example, is served over stir-fried vegetables prepared at just past al dente. You’ll find broccoli, carrots, celery and more along with bite-sized pieces of chicken. The curry, as aromatic as it is flavorful, is delightful, not as pungent as Indian curry or nearly as sweet as Thai curry.

29 October 2016: Though Pad Thai has long been considered the prototypical Thai dish, Gastronomica contends that Pad Thai isn’t really Thai at all. Many culinary historians agree, actually crediting the Chinese with the invention of Pad Thai. Regardless of origin, you’re more likely to find a Burger King restaurant not serving cheeseburgers than you are a Thai restaurant not serving Pad Thai. It’s also not surprising to find that many many Vietnamese restaurants also serve Pad Thai. After all, the thin rice noodles used in making Pad Thai are similar to Vietnamese noodles used in making pho. Le Bistro’s version of Pad Thai is very similar to and as good as the Pad Thai at many of Albuquerque’s Thai restaurants. It’s got a nice balance of sweet, salty, and sour flavors and is generally delightful, particularly if you’re an aficionado of this popular dish.

29 October 2016: It’s oft said that you should never go grocery shopping on an empty stomach lest you return home with bags of comestibles you might not otherwise have ordered. You’d think the same premise would apply at restaurants, but on our way out the aromas of fresh bread wafting from the front room pulled me in like a siren’s call–to the tune of three banh mi sandwiches: the special combination, grilled pork and grilled chicken sandwiches. Those I took home for dinner which pleased my bride of 31 years very much. The banh mi were superb, but frankly, your humble blogger was still rather sated from lunch and didn’t enjoy them as much as a famished Gil would have.

There are other differences.  Pho derives much of its flavor profile from aromatic star anise and cinnamon as well as beef bones seasoned with fermented fish sauce.  Bun bo Hue broth is based on beef and lemongrass and is seasoned with fermented Vietnamese shrimp paste.  Pho is made with various cuts of beef.  Bun bo Hue not only has beef, but a Vietnamese pork loaf often referred to as “Vietnamese bologna” and often, congealed pork blood cubes.  For years it’s been my go-to elixir.  Le Bistro’s bun bo Hue is among the very best in the city–not necessarily the spiciest, but certainly one of the most flavorful.  For me, it’s every bit as comforting as any pho with several times more personality.

Le Bistro is located on San Pedro between Lomas and Constitution (almost directly across the street from Christy Mae’s). It’s a destination which promises to draw savvy diners with a magnetic pull. With more than thirty Vietnamese restaurants, Albuquerque hasn’t reached a critical mass. As long as they’re all as good as Le Bistro, we’ll continue to frequent them.