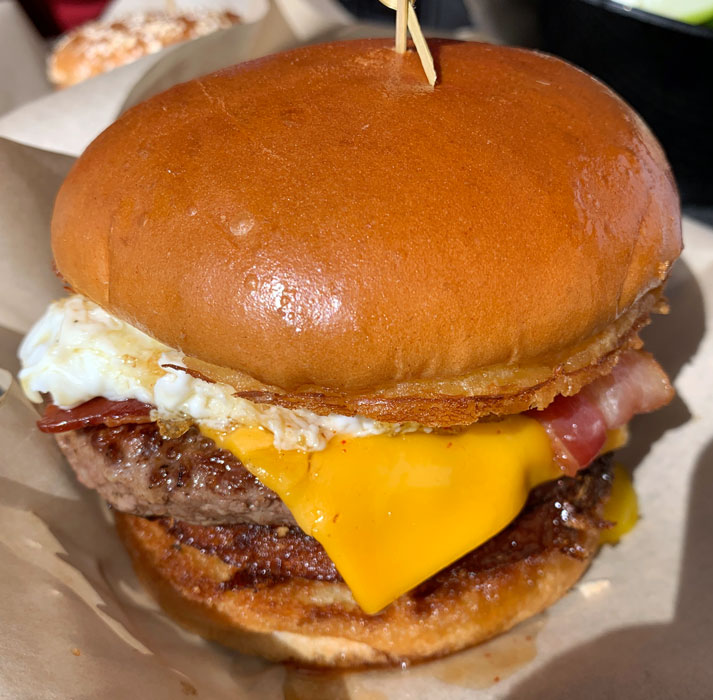 “When people pile seven things onto one burger, it drives me nuts!”
~Bobby Flay

Burger meals at the Garduño home are always an interesting dichotomy, some might say a clash of opposing ideals and styles.  For my Kim, a burger is about the meat to bun ratio ameliorated by a minimum of tried and true ingredients, usually just lettuce, relish and mustard (yawn).  For her mad scientist of a husband, meat and buns are tabula rasa, merely starting points for experimentation with sundry ingredient combinations.  Over the years I’ve become rather adept at figuring out what ingredients work well together to create burgers that please my pedantic palate, titillate my tongue and arouse my olfactory senses.  Until I become bored with it, my current favorite homemade burger is constructed with an 80 percent lean and 20 percent fat, hand-formed beef patty, smoked Cheddar, caramelized onions, honey mustard and Ted’s hot dog hot sauce (thank you, Becky)

Without delving into the neuropsychology of flavor and its nuances, the art and science of constructing burgers is largely a matter of personal taste.  Many people are fairly monogamous about their burgers (not that  there’s anything wrong with that) while some of us are more polyamorous.  For the latter, options are only as limited as your travel budget.  Want a three-quarter-pounder Black Angus beef burger covered in a scoop of hot fudge-drizzled vanilla ice cream, a maraschino cherry on top with an Irish flag in it?  You can find it at McGuire’s Irish Pub in Pensacola, Florida.  Prefer your burger layered with peanut butter, bacon, and fried bananas, and dusted with cinnamon and sugar.  It’s available for you at the Boston Burger Company.  How about Australian Wagyu beef with sautéed foie gras, shaved truffles, and black truffle sauce?  It’s yours for sixty-dollars at the Burger Bar in Las Vegas, Nevada.

Unconventional burger toppings haven’t always been as readily available or widely accepted as they are today.  In fact, since the 1900 invention of the hamburger by Louis Lunch in Hartford, Connecticut, the most significant burger ingredient innovations were cheese in the 1930s and bacon in the 1960s. The first decade of the 21st century accelerated the evolution-revolution of burgers with the widespread proliferation of “gourmet” burgers and their catch-as-catch-can toppings.  By the 2010s, “buns that aren’t buns” began gaining traction, offering consumers such options as burgers with doughnuts, ramen, waffles and even mac and cheese as buns.  If the first two decades of this century are any indication, the future portends a sky’s the limit approach to the sacrosanct burger.

A preview of that future came to Albuquerque’s burgeoning Uptown shopping district with the December, 2018 launch of Burger 21, a restaurant which purports to be obsessed with burgers.  Sure it’s a chain, but it’s a chain after my own heart–a restaurant for which burgers aren’t just another meal.   Burger 21’s website raves “we Chef craft our burgers with obsessive zeal.  We don’t compromise on quality or ingredients.  We are burgers reinvented.”   Reinvented!  How can you not love that?  As an avowed aficionado of creative burger deliciousness, I just had to try it.  Besides that, even if the ingredients aren’t creative enough for me, burgers constructed from hand-cut 100% certified Angus beef have got to be good.

Why 21?  The restaurant’s founding vision was “the best 21 reinvented burgers on the planet,” but they didn’t stop at just 21.  As of this writing, Burger 21 has created nearly sixty different burgers.  Not all of them are on the menu which today showcases nine beef burgers not counting its “elusive, get-it-while-you-can featured seasonal burger” and just for New Mexico, the 505, a green chile cheeseburger showcasing Hatch green chile.  Also on the menu are six tuna, chicken and veggie burgers including the vegan plant-based “Impossible” burger.  Slider three-packs fill out the burger menu though you can innovate further with add-ons.  Fresh salads, fries and sides as well as chicken tenders are available when you’re not in the mood for a burger.  Shakes, by the way, are every bit as creative as the burgers.

As someone who thinks about food 24 X 7 X 365, it was only fitting that my inaugural burger would be the aptly named 24/7 (100 percent certified Angus beef patty, over-easy egg, applewood smoked bacon, cayenne maple syrup, American cheese, Thai ketchup, potato crisp on a toasted brioche bun).  More than any of the beef burgers on the menu, it sounded like something I would have invented–save for the potato crisp.  Predictably, the potato crisp (which was nearly as thick as the beer patty) was not only dry, it took away from the moistness and flavor of the other ingredients, so much so that the ostensibly assertive cayenne maple syrup and Thai ketchup were virtually lost.  Take it from this mad scientist, ask for the potato crisp on the side.  It’ll make for a much better burger.

Also predictably, my Kim took a burger with most of her favorite ingredients and undressed it.  Her choice was the 101 (100 percent certified Angus beef patty, 21 sauce, lettuce, wine-ripened tomato on a brioche bun).  Her “reinvention” essentially denuded the burger, substituting a wheat bun for the brioche and leaving only the beef patty and the 21 sauce (mustard, ketchup, mayo, dill pickle juice, cayenne pepper and garlic).  Aaargh!  Okay, it was a pretty good burger and that sauce was dynamite, but somewhere Burger 21’s chef is probably pulling his or her hair.  The 21 sauce should be bottled and sold.

Should Burger 21 ever need another creative consultant for its burger invention department, there’s a certain sesquipedalian gastronome who’s got some unique ideas.