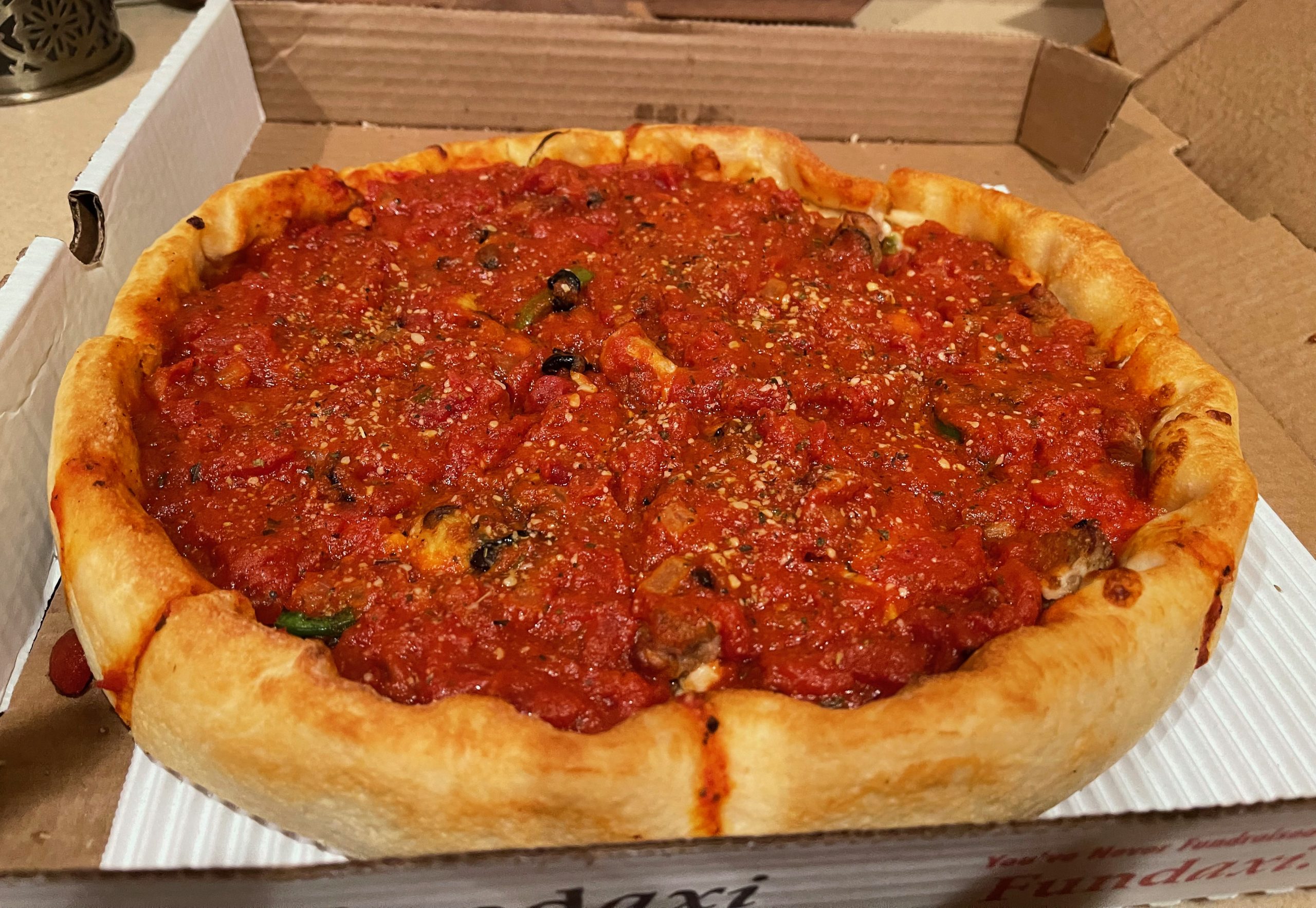 My first review of Pizza 9 was written after my inaugural visit in January, 2009 at its original location in Albuquerque’s International District.  Three years later, there are nine Pizza 9 restaurants strewn throughout Albuquerque and Rio Rancho with a Pizza 9 planned for Santa Fe and “sky’s the limit” growth planned beyond that.  Even before Pizza 9 became a ubiquitous Duke City presence, my review engendered a significant number of visits and comments.  Today, this review is the tenth most frequently launched from among nearly 700 reviews on this blog.  More than 20 comments–some favorable and some almost inflammatory in nature–seem to indicate Pizza 9 evokes passion.

What’s in a name?  According to an English bard and playwright of some repute, a rose by any name would smell as sweet.  It would be interesting to conjecture what William Shakespeare would have said about pizza, especially since the label “pizza” has come to mean different things, especially to proponents of two vastly different styles of pizza.

In New York City, pizza is practically a religion with nearly than 1700 restaurants in “Metropolis” containing the words “pizza” or “pizzeria” in their name.   “New York style pizza”  has come to mean a thin crust, slices which are wide at the top  tapering down to a perfectly pointed bottom and of course, slices so large that the only way to eat them is by employing the “New York fold,” folding a slice in half so that the contents are sandwiched together inside.   Interlopers daring to serve anything else are almost as rare in New York City as Dallas Cowboys fans.

“Chicago style pizza,” on the other hand, is practically the antithesis of New York style pizza.   The pizza style popularized in America’s Second City is characterized by a thick, buttery crust (often made with cornmeal) topped with profligate amounts of cheese and slathered with a chunky, uncooked tomato sauce.   The dough for this pizza is sometimes made up to a day in advance so it has a chance to rise like the magnificent Chicago sky line.  Because Chicago style pizza is so thick and heavy, eating it is not an activity you can rush, nor can you consider a single slice merely a snack.

The debate between proponents of New York style thin-crust pizza and aficionados of deep dish Chicago style pizza is as spirited as a gridiron confrontation between the Giants and da Bears.  Dissenting Windy City voices will argue that New York style thin-crust pizza is tomato sauce slathered on cardboard, is dry and floppy and doesn’t hold up against the weight of toppings.  The anti thin-crust crowd becomes a little thin-skinned themselves when their favorite pizza is called a quiche, casserole or even a lasagna  and is described as droopy, soggy bread so heavy you practically herniate when trying to lift it.

Debating this contentious issue takes time away from what both sides should be doing and that’s eating the pizza of their choice.  “Live and let eat” is the motto to which subscribe those of us who love their pizzas thin, thick and everything in between. Most pizza purveyors in the Duke City are claimants to the New York style of pizza so when we found out about a restaurant offering Chicago style pizza, we had to wonder if this was another audacious pretender or the real deal.  The name “Pizza 9” may or may not have anything to do with Chicago television super station WGN, Channel 9, but that name just might trigger, in the mind of some Chicago transplants, a Windy City affiliation.  The original Pizza 9 is located on Gibson, directly across the street from the Lovelace Hospital.  It is housed in a former Kentucky Fried Chicken site.

The first person you’re likely to see when you walk into Pizza 9 is Hass Aslami, erstwhile proprietor of Chicago Beef, a short-lived oasis for Chicago transplants excelling in such  Chicago favorites as deep-dish pizza, Italian beef sandwiches and hot dogs.  For any Chicago expatriate, those are the essence of deliciousness, as quintessentially “home” as  the Buckingham Fountain, the Sears Tower or Wrigley Stadium.  Those are the foods they love best and miss most.

Mr. Asiami has not only made it possible for transplanted Chicagoans to enjoy their favorite staples on Gibson Boulevard, he’s franchised his operation locally.  Within a year of launching his inaugural site, three additional Pizza 9 restaurants dotted the metropolitan area, including one in Rio Rancho (1751 Rio Rancho Blvd, Suite 106) owned and operated by Vu Nguyen.  The Rio Rancho restaurant opened on September 13th, 2009.  Vu and his crew are extremely accommodating and friendly.

At Chicago Beef, pizza had third billing on the menu behind Italian beef sandwiches and Chicago style hot dogs.  In Hass’s new digs, the name on the marquee is a clear indication of his restaurant’s emphasis–specialty and gourmet pizzas, either Chicago style deep-dish or (gasp) thin crust.  Yes, contrary to popular belief and stereotypes, man pizzerias throughout Chicago craft a pretty mean thin-crust pizza.     Three sizes are available at Pizza 9–nine-, twelve- and fourteen inch pizzas.

To be completely honest, we didn’t find the deep-dish pizza at either Chicago Beef or Pizza 9 wholly authentic (at least as compared to the casserole-thick pizzas in the Windy City) although my initial impression was that it’s a pretty good pizza.   It’s only about a third the thickness of a true Chicago style pizza as you might find at a Windy City pizzeria such as Gino’s East or Pizzeria Uno.  Still, it’s thicker than most pizzas in the Duke City and it has a light, airy and buttery crust which you can top with a variety of fresh and delicious toppings.  There is no way you could mistake it for a New York style pizza.

Another indication that Pizza 9’s delicious offering isn’t wholly authentic is the fact that even though Chicagoland’s deep dish purveyors pre-make their dough, it takes as long as 45 minutes for it to bake completely.  Our Hawaiian pizza (Canadian bacon, pineapple) was ready in about ten minutes.  Not even the most staunch deep-dish dissenter would call this pizza quiche, casserole or lasagna.  What they would call it (if they can swallow their pride as lustily as they’d be swallowing the pizza) is delicious.

The crust at Pizza 9 holds up well against the weight of any ingredients with which you might top it.  Despite being light and airy, it is a stiff crust which, in no way, can you fold vertically.  The butteriness comes from a low-fat oil which imbues the crust with an unctuous quality without being overly greasy.   Pizza 9 also uses a pizza sauce perhaps the thickness of tomato paste, not the chunky crushed tomato-based sauce used in Chicago.  Dissenters (read the feedback below) compare Pizza 9’s pizza to that of Pizza Hut, a comparison I’m not able to validate since my last experience with Pizza Hut occurred in Cheltenham, England almost three decades ago.

Being married to my Chicago born and bred babe for nearly a quarter of a century, I’ve spent enough time in the Windy City to appreciate the city’s culinary offerings, but it’s not deep-dish pizza or even the Second City’s four-star haute French cuisine that owns my heart (and appetite) when in Chicago.  That distinction goes to the more modest and pedestrian Italian beef sandwich, a descendant of the French Dip Sandwich according to my bible for all things sandwich, American Sandwich.

Becky Mercuri’s fabulous tome further explains that the first Italian Beef Sandwich may have been created by accident by an Italian cook named Tony (what else) who added some spices to enliven the restaurant’s rather bland French dip sandwich.  Even though Tony’s creation received much acclaim, he was fired on the spot.  Undeterred he opened an Italian Beef Sandwich stand down the street and the rest, as the proverbial “they” say, is history.

Chicagoans grow up worshiping at high counters on which they prop their elbows as they consume Italian beef sandwiches–sometimes because the restaurant has no tables, but more often than not, because no matter how careful they are, they’re bound to spill shards of beef, bits of giardiniera and drippings of spice-laden beef gravy onto their clothing.  It is absolutely impossible to eat a good Italian beef sandwich while driving.  That is, if you want to keep your clothing clean and dry.

Spillage is just one way you know you have an authentic Italian beef sandwich.  One other way is by the fantastic flavors imparted by a spice rub that usually includes basil, oregano, garlic, black pepper and red pepper flakes.   Those spices are massaged onto sirloin tip which is roasted at high heat.  The beef is sliced Nicole Ritchie thin and is so tender it shreds into pieces.

At many Chicago restaurants (and you can have it this way at Pizza 9, too), it is momentarily immersed (dipped) in the gravy to make it even juicier. It is often served with either hot or mild giardiniera (a concoction of spicy, pickled, chopped-up vegetables such as peppers, carrots, cauliflower and celery), but sometimes with sautéed mushrooms and bell peppers (Gil’s Thrilling Recommendation: Hot Giardiniera). The entire creation is extremely messy; you dare not ever try to eat one while driving.

My verdict–and I’ve frequented Johnnie’s Beef,  an Italian beef sandwich restaurant food writer Ed Levine said made one of “22 sandwiches that will change your life”–is that Pizza 9’s combination Italian beef and sausage combo is  good enough to assuage the appetite and longing of Chicago transplants missing their favorite sandwich.  It’s as good as several Italian beef sandwiches we’ve had in the Chicago area–and why wouldn’t it be?  The beef, sausage, bread and giardiniera are all procured from high-quality vendors in the Windy City.

Vu and his crew at the Rio Rancho Pizza 9 are doing some things just a bit differently than the original on Gibson.  For one thing, they’re offering a lunch special that includes a slice of pizza.  For another, they’ll take the Chicago-style beef calzone with onions, bell peppers, giardiniera and au jus and add sausage.  It’s like having an Italian beef sandwich on a a calzone crust made from the same wonderful dough as the pizza.  This may be the biggest calzone I’ve ever seen, easily the size of a flattened football which means you’ll have left-overs.  This is an excellent calzone with robust and delicious flavors.

In Rio Rancho you’ll also find Italian French fries, basically just crinkled fries with Italian seasoning sprinkled on top.  They’re easily more exciting than the salty and boring Fries you find just about anywhere else.  In Rio Rancho, you’ll also find a number of desserts imported from Chicago.  They include several cheesecakes and a tiramisu which is more than passable.

Pizza 9 is a Bo Derek ten in my book, a restaurant  which takes me back to Chicago and some of the Windy City’s quintessential foods.  Go there for the pizza if you must, but you’ll fall in love with the Italian beef sandwiches.