Skip to content
AlbuquerqueChineseClosed in 2016Gone But Not Forgotten 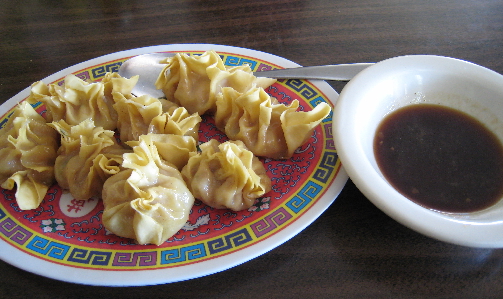 1943’s Best Picture Academy Award winner Casablanca is replete with memorable quotes and scenes. Toward the end of the movie, reluctant hero Rick Blaine helps the beauteous Ilsa Lund and her husband, underground leader Victor Lazlo, escape to Lisbon. In a tearful farewell, Rick tells Ilsa she would regret it if she stayed. “Maybe not today. Maybe not tomorrow, but soon and for the rest of your life.” Having been tipped off to the escape, Major Strasser of the Luftwaffe drives up and tries to prevent it. Rick shoots and kills him. When the police arrive, the opportunistic French police Captain Renault tells them to “round up the usual suspects,” saving Rick’s life.

“Round up the usual suspects” seems to be the unintended mantra of Chowhound and similar foodie message boards. Invariably, a list of “anointed” restaurants is repeated ad nauseam whenever a prospective diner asks where to have a meal. The list of anointed restaurants is short and it’s exclusive. It’s hard to break into the list and once a restaurant is on it, it might take an exposé of roach infestations for the restaurant to come off the list.

When it comes to Chinese food in Albuquerque, the list of “usual suspects” is even shorter than for cuisine of other genres. Most people mention Ming Dynasty and Amerasia for dim sum while proponents of Americanized Chinese food (sweet and sour sauce lacquered on fried meats) generally extol the cuisine at Chow’s Asian Bistro and P.F. Chang’s.

Every once in a while, there’s a lone voice crying in the desert wilderness–an adventurous diner who doesn’t follow the well-beaten, well-eaten path to the anointed favorites. Every once in a while, an intrepid culinary adventurer like Barbara Trembath will make a very compelling case for a restaurant that’s not necessarily packaged with the flash and panache of some of the anointed restaurants. It would behoove the rest of us to listen.

Barbara spent the first ten years of her life, as well as age 23-30 in San Francisco, eating her way up and down Grant and all the alleys in between. She’s also been to Hong Kong almost a dozen times. It’s safe to say she not only likes Chinese food, she really KNOWS Chinese food. Barbara introduced me to Hua Chang, a nondescript -san and papa-san restaurant on Fourth Street. She told me Hua Chang was not the “typical American Chinese restaurant” and that “there are things on and off the menu that I’ve never heard of.”

Mama-san and Papa-san are Mr. and Mrs Lim, two of the nicest restaurateurs I’ve ever met. They treat their customers like welcome guests and feed them like they would family. That means prodigious portions of fresh food prepared to order. Hua Chang is situated at the site in which Tio Oscar’s once plied its business. The Lims actually operated their restaurant at the site for nearly a dozen years before deciding they would rather work shorter hours for someone else than continue to work seven days a week for themselves.

When Tio Oscar’s closed up, the Lims reopened their restaurant. It’s a restaurant I vaguely recalled driving by dozens of times without giving it a second thought. Hua Chang has none of the pristine veneer or the effusive, over-the-top flamboyance of the chains and all-you-can-choke-down buffets that dominate the Duke City’s Chinese restaurant scene. It truly is nondescript. It doesn’t get much better once you’re seated. Simple booths and tables are your accommodations while virtually stark walls provide none of the visual distraction you might experience elsewhere. .

The foyer leading to Fourth Street does have a colorful mural depicting balloons during Albuquerque’s International celebration of the aviation event, but that’s probably a hold-over from Tio Oscar’s. Visual stimulation comes when you open up the menu and gaze in awe at the many intriguing options. There are luncheon specials galore, each served with an egg roll and fried rice. There, too, are chef specialties and combination plates sure to please the most discerning palate.

The menu is as stark as the walls in that none of the entrees are described other than by being named. The Lims are more than happy to tell you all about “Happy Family” and other options. A more sagacious option than hazarding to guess what might be good (though chances are, everything is) is ordering what Barbara recommends. That would start with an order of pot stickers hand-made by Mrs. Lim every morning.  The pot stickers are “best in Albuquerque” terrific–eight to an order beauties fashioned like bags of gold and stuffed with minced chicken. A light soy and rice wine vinegar sauce ameliorates the flavor of these delicious dumplings without detracting in the least.

Barbara also recommends the salt pepper chicken which she describes as “to die for.” Hua Chang’s rendition features lightly breaded chicken stir-fried in a wok with fragrant ingredients such as scallions, onions and jalapenos.  Mr. Lim is obviously a master of the wok, knowing how to quick-heat aromatic ingredients at the optimum moment to release their aroma before adding chicken. He also removes the entree from the wok with the precision of a practiced culinary technician, knowing the food is still cooking for a minute or longer after it is removed from the wok. It makes a huge difference and is the reason his salt pepper chicken retains its moisture with just a hint of crispiness. It’s a delicious entree, a mountainous portion of deliciousness.

Barbara’s barometer for Chinese food is Kung Pao Chicken. She figures if a restaurant can get that dish right, it’s a restaurant worth visiting again. Hua Chang’s Kung Pao chicken is prepared San Francisco style the way she likes it–not too saucy with everything cut into little cubes, with an option to order it extra spicy and extra nutty, too.

Though we didn’t try the Kung Pao Chicken during our inaugural visit, we were very happy with the Chicken Lo Mein combination plate (egg roll, fried rice, BBQ ribs). Lo Mein, a dish of soft, stir-fried noodles and sundry vegetables, is a simple dish yet more often than not, is of mediocre quality or worse. At Hua Chang’s everything on the Lo Mein is cooked to perfection with vegetables having the snap of freshness, the noodles having the perfect balance between firmness and tenderness and the sauce having a light, delicate sweetness without being cloying.

If you like your sauces a bit more invigorating, the menu has infinite possibilities such as the ginger chicken in which chicken is steamed and served with scallions, bak choy, onions and of course, ginger. Ginger is renown as an excellent palate cleanser in between bites of sushi. Each bite of Hua Chang’s ginger chicken seems imbued with the same properties of freshness and liveliness you find in the ginger eaten with sushi. This is the best version of this dish I have had in the Duke City.

The portions at Hua Chang are so generous that you’ll easily have enough left over for another meal or more–and everything reheats well. We, in fact, reheated all our left-overs (lo mein, fried rice and salt pepper chicken) together and the resultant amalgam was wonderful with the flavors melding together like some perfectly matched formula.

I don’t know if Hua Chang will ever make it to the list of anointed restaurants, but it should be on your culinary roadmap.