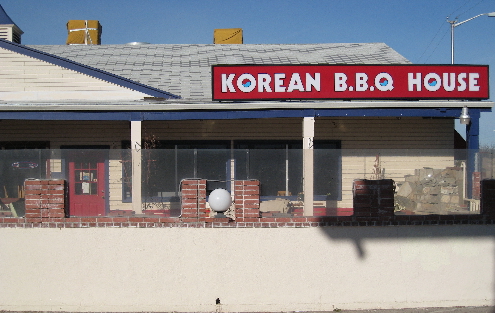 For dining patrons in the know, the 2002 closure of the Fu Shou House was one of the most heartrending moves in the Duke City restaurant scene. In the Korean B.B.Q. House, Fu Shou was reborn.

While the Fu Shou proprietors don’t own the Korean B.B.Q. House, they did hold court in the kitchen for a while after the restaurant’s launch crafting the delicious entrees for which they were renown. Another chef now stewards the kitchen, but has maintained the high standards of his predecessors.

The bulgogi is spicy, sweet, tangy and absolutely delicious. Ditto for the bulkalbi which thankfully was also meaty and relatively free of fat. Unlike bulgogi and bulkalbi served at some other Duke City restaurants (primarily Japanese and Chinese restaurants), the Korean B.B.Q. House version was made of high quality meat, not the sinewy, fatty stuff which should be saved for the house pets. Both the bulgogi and bulkalbi are served with five side dishes, including one of the spiciest kimchees in town. An accompanying egg drop soup was also quite good.

As an appetizer you might want to try the beef kimbob, a sort of Korean sushi served with a soy sauce heavy dipping sauce, but which was nonetheless delicious. Our sole appetizer complaint is about the vegetable egg rolls which were of the quality served at many buffet restaurants (in other words, not very good).