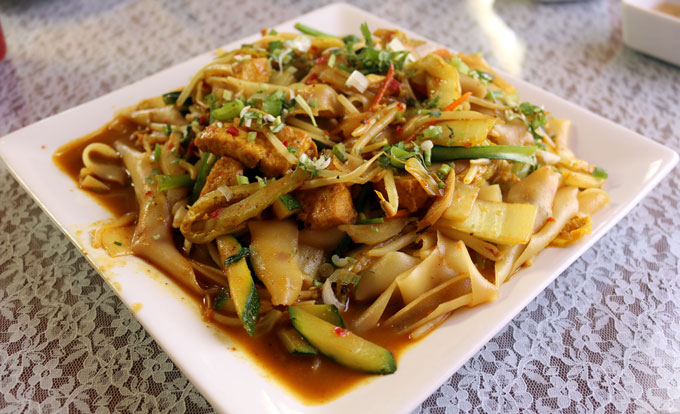 Celebrity chef and professional cynic Anthony Bourdain, one of the more vocal detractors of the vegetarian lifestyle, contends “Vegetarians are the enemy of everything good and decent in the human spirit, an affront to all I stand for, the pure enjoyment of food.” He’s not alone in his opinion. Vegetarians are perhaps the most maligned and misunderstood group in the culinary community. Consider the stereotypes. Nay-sayers with their preconceived and oversimplified notions founded on ignorance would have you believe all vegetarians are emaciated and pallid tree-huggers who worship at the altar of PETA. They attack vegetarian fare as bland and boring, lacking in variety and mostly tofu and lettuce.

You can bet they wouldn’t spout their ill-founded drivel about vegetarian cuisine if they partook of just one meal at An Hy Quan, a Duke City restaurant showcasing Vietnamese vegetarian cuisine. An Hy Quan’s cuisine is every bit as good as the food served at Albuquerque’s best Vietnamese restaurants, all of which cater primarily to carnivores. They’d also have to toss out their stereotypes that a vegetarian diet renders its practitioners pale, sickly and scrawny should they meet Bill, the restaurant’s affable proprietor. Admittedly not a bona fide vegetarian, Bill has reduced his consumption of meat over the years by nearly ninety-percent and he’s never felt better. He sports a mesomorphic somatype (meaning he’s really built) that would put some athletes to shame.

Interestingly, even though many Vietnamese dishes are replete with vegetables, a vegetarian diet is rare in Vietnam. Bill confirmed that strict adherence to vegetarianism is practiced mostly in Buddhist temples and on the first and fifteenth of each Lunar Calendar month when all Buddhists shy away from meat. In Vietnam as in much of Asia, the citizenry believe meat is the best part of any dish. Try going meatless along the Mekong and you can expect quizzical looks if not being overtly asked “why would anyone would turn down meat?” It’s not easy for Vietnamese to comprehend that someone wouldn’t want meat which they believe imbues people with strength, stamina and vigor. Eschew meat and they worry you’ll become too enfeebled and malnourished to function.

An Hy Quan, a term which translates to “a place of peace and happiness” is breaking down any stereotypes diners may have about vegetarian food and is earning converts daily in the process. One of the reasons for its popularity is that An Hy Quan features Vietnamese vegetarian fare that’s true to traditional Vietnamese flavors and ingredients. It’s the antithesis of faux burgers which, even diehard vegetarians will admit, taste like desiccated, overcooked corrugated cardboard. Another reason so many savvy diners flock to An Hy Quan is Bill, the peripatetic owner and amiable ambassador of an addictive restaurant.

Bill grew up in the restaurant business. His mother was a pioneer, launching Huong Thao back when there were fewer than a handful of Vietnamese restaurants in the Duke City. From the onset, Huong Thao had a reputation as a vegetarian-friendly restaurant, earning accolades from the Vegetarian Society of New Mexico for its “great food” and “many vegetarian options.” Bill eventually bought and operated Huong Thao for about seven years before embarking on other ventures. When he made his return to the restaurant business, he wanted to do something different, something as pioneering as his mother had done. He launched An Hy Quan in 2015.

Almost from the beginning, An Hy Quan was recognized as something special. In September, 2015, it was named by Movoto, a multi-state real estate brokerage, as one of the “ten best Albuquerque restaurants for vegetarians.” Movoto wrote “The menu at An Hy Quan Vegetarian Restaurant is enough to make a person cry with happiness. From appetizers to dessert, dining is an adventure in flavor and technique combined with excellent service and generous portions. Select memorable dishes like Vietnamese spring rolls, avocado shakes, mock pork, and much more.” Not long thereafter, An Hy Quan was recognized by Three Best Rated as one of the Duke City’s three best vegetarian restaurants.

Peruse the menu and you’ll quickly discern many familiar favorites–ranging from rice plates to noodle dishes and some of the best, most diverse soup (including pho) selections in the city. While some Vietnamese restaurants in Albuquerque boast of menus listing well over one-hundred items, An Hy Quan’s menu seems somewhat abbreviated in comparison. That doesn’t make it any easier to decide what to order. Put yourself in Bill’s hands and you’re assured of a great meal. There are at least two “must have” appetizers, one of which I had both during my inaugural and second visit. It’s an addictive dish you might dream about.

24 June 2016: That would be the papaya salad, the very best my Kim and I have ever had. A fresh and invigorating starter possessing more mouth-pleasing qualities than any salad in recent memory, it’s artfully plated and large enough to share. Matchstick-like slivers of papaya resembling noodles are tossed with fresh basil, chopped peanuts, ground chili and mock ham in a shallow pool of pleasantly piquant “fishless” sauce with tangy citrusy notes. You’ll be tempted to lap it up off your plate when the last remnants of the salad have been polished off.

24 June 2016: Following traditional New Mexican restaurant practices, An Hy Quan delivers complimentary Vietnamese “chips and salsa” to your table. They’re not chips and salsa as you’d enjoy them at say, Mary & Tito’s Cafe. They’re chips and salsa as they might be served in Vietnam. The chips are made from fried potato starch. Texturally they resemble the packing peanuts you shove into boxes to protect your delicate valuables. The salsa is a chili sauce with a nice level of heat. Instead of dipping the chips into the sauce, you’ll spoon it on as liberally as your taste buds can appreciate.

25 June 2016: Vegetarian egg rolls sound much like an oxymoron, a seemingly contradictory term much like “honest politician.” Though described on the menu as “deep-fried egg rolls,” eggs aren’t used in preparing these tightly-wrapped, golden-hued cylindrical treasures. Served four per order, they’re as good as any egg rolls served at any Vietnamese or Thai restaurant in the Duke City. Because most egg rolls are engorged primarily with vegetarian ingredients, you might not be able to tell any difference. They’re absolutely delicious. So is the dipping sauce with flavor notes resembling fish sauce.

24 June 2016: Regular readers recognize my rapacious love of curry, whether it be Thai, Vietnamese, Indian, Japanese or meteorologist (KRQE’s pulchritudinous Kristen Currie). It stands to reason vegetarian curry would be added to that list…and it was. My inaugural meal at An Hy Quan was curry tofu served with rice. Vietnamese curry tends to be very aromatic, somewhat lighter than Indian curries and not cloying as some coconut-infused Thai curries tend to be. Though you’ll be tempted to finish the large portion, consider that the flavors of curry get better over time and the promise of left-overs becomes something to look forward to. This curry is served piping hot and has a pleasant amount of piquancy that’s tempered only slightly by the cubed tofu and vegetable variety. It’s an absolutely delicious curry dish!

25 June 2016: If your preference with curry leans toward noodles instead of rice, An Hy Quan has you covered. The curry noodles dish features wide rice noodles, cubed tofu and assorted vegetables (including yu choy which resembles spinach in both appearance and flavor). As with the curry rice dish, curry noodles are served with tofu which inherits the wonderfully pungent and pleasantly piquant flavors of the curry. The assorted vegetables are fresh and unfailingly crispy–not quite al dente, but perfectly prepared. My Kim, who doesn’t share my affinity for curry, loved this dish. So will you!

25 June 2016: One of An Hy Quan’s most popular dishes (raved about in several Yelp and Zomato reviews) is the cashew mock pork rice dish. My Kim who prefers noodles (even over Alford) asked nicely if she could have the mock pork and cashews over crispy noodles and the ever-accommodating Bill agreed. The dish was even more delicious than she could have conceived. Kim finds something magical in the reconstitution of crispy noodles in the dish’s light sauce. She loved the mock pork, admitting it’s as good as the real stuff. She even enjoyed the vegetables and the sesame seeds which topped them. This dish should be standard on the menu (Kim won’t even ask for residuals).

21 November 2016: Deciding to pursue a vegetarian lifestyle is the easy part. Preparing palatable vegetarian dishes at home or discovering restaurants which make them delicious takes a little more work. When my friend Elaine, already one of the most healthy and fit people I know, decided to try vegetarianism, she asked me to take her to my favorite vegetarian restaurant. It didn’t take much deliberation to decide where we’d go. Not surprisingly, Hy Quan exceeded her expectations. Elaine fell in love with the papaya salad and egg rolls, but it may have been the clay hot pot rice dish we split (and couldn’t finish) which most excited her. Clay pot cooking is very popular throughout Asia where the clay pot is used as both pot and serving vessel. Aside from rice, this dish contains an assortment of vegetables (carrots, cabbage, zucchini and green onion) prepared perfectly as is the accompanying tofu. The dish has a a smoky, wok-fried flavor with crispy, fresh vegetables and at the bottom edges of the pot, amazing caramelized rice which Bill confirmed is the most popular feature of a terrific dish.

If you’ve never enjoyed vegetarian fare, it’s time to visit An Hy Quan where you might not be able to taste any significant difference and even if you do, you’ll enjoy it nonetheless. An Hy Quan isn’t only one of Albuquerque’s very best vegetarian restaurants, it’s one of the city’s best Vietnamese restaurants. Make that best restaurants of any genre. It’s that good!