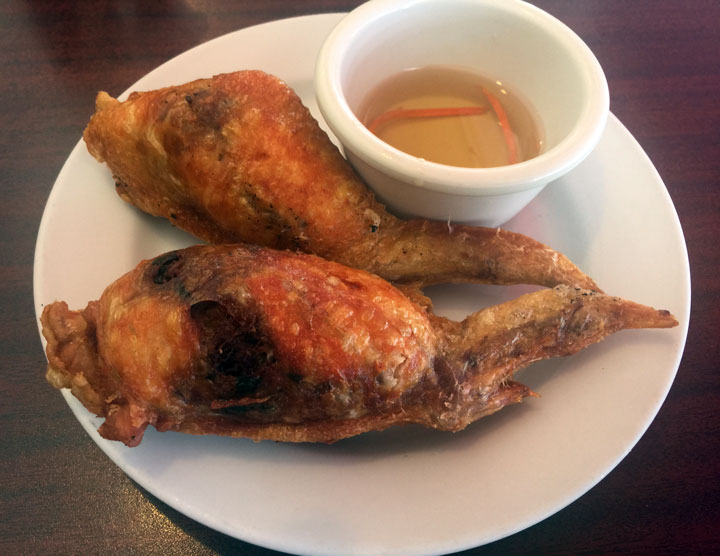 In the year 2000 (ancient history by restaurant standards) when the Duke City had only a handful of Vietnamese restaurants, only one was listed on Zagat Survey’s Millennium Edition of the top restaurants in the Southwest. That restaurant was Huong Thao which was widely regarded at the time as perhaps the city’s very best Vietnamese dining establishment. Zagat Survey accorded Huong Thao a rating of “24” which categorized it as “very good to excellent.” The restaurant was praised for its “delicious traditional foods” and was singled out for its “no-puff” policies back when smoking was still allowed in Albuquerque dining establishments.

In 2002, Huong Thao eked out a win over other highly-regarded Vietnamese restaurants in La Cocinita magazine’s (defunct) 2002 second annual critic’s choice awards. Garnering praise from an august body of panelists were the “herb-filled spring rolls” and “oh-so-crispy grilled pork.” Today, Huong Thao is a venerable presence, an elder statesperson among a phalanx of very good to outstanding Vietnamese restaurants throughout the Duke City. It remains a formidable favorite to this day because it’s not only retained loyal patrons, it’s cultivated new aficionados.

From the very beginning, Huong Thao has held a reputation as a Vegan-friendly restaurant, earning accolades throughout the 1990s and beyond from the Vegetarian Society of New Mexico for its “great food” and “many vegetarian options.” Although the word “Huong” translates from Vietnamese to “scent of the flower” and “Thao” translates to “herbal,” the restaurant was actually named for its founder. Though she long ago sold her eponymous restaurant, the fragrant bouquets which always wafted from Huong Thao’s kitchen remain part and parcel of the restaurant experience. Huong Thao (the restaurant’s founder, not the restaurant) continues to perform fragrant feats of culinary magic, albeit at her son Bill’s restaurant An Hy Quan. Not surprisingly, An Hy Quan is not only the city’s very best Vietnamese vegetarian restaurants, but one of its best restaurants of any genre.

Over the years, our visits to Huong Thao have been infrequent, in part because this Northeast Heights restaurant is the furthest east from our home of any Vietnamese restaurant in Albuquerque. My return visit in March, 2017, after an eleven year absence sure makes me wish I’d listened to my friend and fellow epicurean Jim Millington who long ago urged me to return. My flimsy excuse had been that Huong Thao had begun offering sushi (which no Vietnamese restaurant should ever do), but Jim also assured me the restaurant’s sole focus had also long ago returned to its Vietnamese cuisine. If there is one excuse that only partially absolves my transgression of not having visited sooner, it’s that Huong Thao does not have a street (Juan Tabo) facing presence and is set back in a nondescript shopping center.

Unlike several other Vietnamese restaurants in the city, Huong Thao’s menu isn’t a veritable compendium of all possible Vietnamese deliciousness. With fewer than sixty appetizers and entrees, its menu is roughly half the size of the menu at some restaurants. Study the menu and you’ll be hard-pressed to find any of your favorites absent. In fact, the menu offers several items not widely seen in the Duke City. The appetizer menu, for example, includes an asparagus and crab meat soup. Among unique entrée offerings are stir-fried curry, shaken beef and mung bean crepes. The menu is a delight to peruse, offering something for everyone who loves Vietnamese cuisine.

22 March 2017: When you do visit Huong Thao, there’s really no excuse for not having the restaurant’s amazing spring rolls. After all these years, these zeppelin-sized spring rolls are still the biggest (and among the very best) in the city–two rice paper rolls per order engorged with pork (and or shrimp and tofu), noodles and fresh vegetables. New Mexicans, of course, will order the New Mexico Spring Roll (green chile and avocado with chicken, tofu or shrimp). This is an idea whose time has come, further confirmation that green chile improves the flavor of everything it touches. The green chile isn’t especially piquant, but it has a nice roasted flavor. Fresh avocado and cilantro lend the essence of freshness. The accompanying fish sauce is a bit on the sweet side, but that’s easily remedied with a liberal application of the chili sauce on your table.

24 March 2017: Despite pretty obvious limitations—they’re messy, they don’t give you a lot of meat and they’re so small it takes a lot of them to put a dent on your appetite—chicken wings have become a veritable culinary institution in America. In many cases, however, the only difference between the chicken wing at one eatery and another is the sauce with which they’re served. There’s not much originality in the concept. Some Vietnamese and Thai restaurants have an answer to the homogeneity of the ubiquitous chicken wing—stuff it.

Huong Thao’s boneless stuffed chicken wings are terrific, the complete antithesis of the limitations listed above. Somehow, the chef has managed to debone a chicken wing; stuff it with ground pork, clear noodles and mushrooms; and deep-fry it. Frankly, it resembles a small fried game hen, pumped up like a football (no Tom Brady jokes here) and fried to a crispy, golden brown. The stuffing is addictive with pungent, earthy notes that complement the crispy chicken skin. The accompanying fish sauce is wholly unnecessary.

22 March 2017: My very favorite entrée is the Hue-style spicy beef soup (bun bo Hue), the spicier, heartier, livelier, more flavorful cousin to pho. It’s the best (and only) reason to eschew pho. Huong Thao’s rendition is, by far, the “beefiest,” most beef-concentrated version of Hue-style soup I’ve ever had. Some of that is courtesy of the beef, meatloaf, tendon and pork hock swimming around in the aromatic beef stock, but look closer and you’ll see lots of the fatty globules which characterize soup that starts with beef and pork bones. Some diners may consider the pork hock and tendon a bit off-putting, but they lend so much personality to a soup already brimming with soul-warming and assertive flavors. Its spiciness comes from lots of lemongrass, shrimp paste and a tangle of aromatic herbs.

24 March 2017: While it seems the Land of Enchantment competes with Mississippi for last place in virtually every quality of life factor, there is one area in which the Magnolia State reigns supreme. That would be in the preparation of catfish. I’ve often lamented (probably ad-nauseum) the lack of great catfish dishes in New Mexico, but should qualify that doesn’t apply to the way Vietnamese restaurants prepare catfish. Café Dalat and before that May Hong have quelled our yen for catfish many times. In Huong Thao’s deep-fried catfish in ginger sauce, we found another superb catfish dish. The ginger sauce is applied lightly as opposed to the lacquered on sauce at Café Dalat, but it is no less potent. That sauce enlivens the flaky fish. Perhaps in deference to queasy diners, Huong Thao serves its catfish sans head which is a shame because there’s plenty of flavorful flesh in fish cheeks.

Huong Thao remains one of the city’s best and most popular Vietnamese restaurants. Don’t just take my word for it (considering the eleven year gap between visits). Ask anyone who knows and loves Vietnamese cuisine and they’ll tell you.