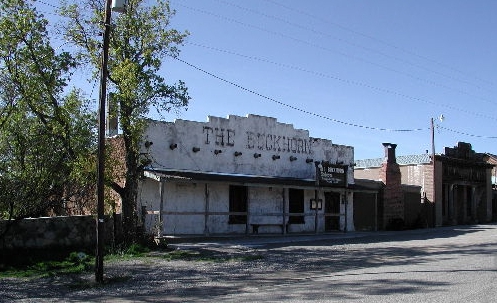 In 1859, 49ers returning home from California discovered gold 7000 feet above sea level among the tall pines (Pinos Altos) north of Silver City. Rampant lawlessness, an anything goes attitude in the pursuit of gold and frequent raids by marauding Apaches made prospectors lives exciting to say the least.

The Buckhorn Saloon, circa 1985, offered respite and sustenance in the form of alcohol, entertainment and food, three things still available in this true Old West town. Walk into the saloon and you’re magically transported almost 150 years back in time.

To remain consistent with our Old West surroundings, Kim and I both had steaks. The Porterhouse steak is easily an inch and a half thick and prepared with salt, pepper and garlic. It was juicy and succulent with just a hint of pink when ordered medium. At medium well the New York steak isn’t nearly as juicy, but is still highly flavorable. The warm bread has a hint of honey and is served in small loaves.

Order your salad with the ranch dressing and you’ll be asking the wait staff why they haven’t bottled and sold it. It’s rich, creamy and tastier than commercial offerings. Also quite good is the chicken noodle soup which is made with thick egg noodles and white chicken with a broth so savory, it would be criminal to add crackers. The menu includes several homemade desserts but unless you have two stomachs, you probably won’t have room for them.

When done with your meal, stagger on over to the adjacent Old Opera Melodrama playhouse for a raucous evening of revelry and fun. The Opera’s Western plays are bawdy and bodacious with just enough double-entendre to make them more appropriate for adults than children. Pinos Altos has other attractions which make it a must stop in the Land of Enchantment’s wild and history laden Southwest quadrant.