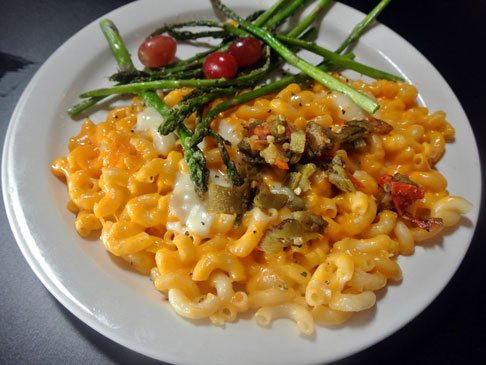 For at least the past seven years, the most famous “biker cafe” in the Land of Enchantment has been the fictional Maggie’s Diner in Madrid on the Turquoise Trail. Constructed in 2007 for the made-in-New-Mexico comedy Wild Hogs, Maggie’s Diner was frequented by bikers of all ilks, whether they be white collar executives in the throes of mid-life crises or the stereotypically rowdy, raucous bikers who terrorize the Madrid’s citizenry and demand food and adult beverages gratis.

After January 14th, 2015 when the Food Network aired a Restaurant: Impossible episode entitled “Revved Up,” New Mexico’s most famous biker cafe probably became the Shade Tree Customs & Cafe in Albuquerque. Chef-host Robert Irvine and crew spent a couple of days in October “transforming” the restaurant. The premise of Restaurant: Impossible is that within two days and on a budget of $10,000, Irvine will transform a failing American restaurant with the goal of helping to restore it to profitability and prominence.

To make the show entertaining, any existing dysfunction or drama in the restaurant’s day-to-day operations is spotlighted in the fashion of all reality shows. If anything, what the show revealed is that when two worlds—a motorcycle shop and a restaurant—collide, issues are bound to arise. Irvine quickly determined the ownership quintumvirate didn’t have clearly defined roles and that operational transparency (food and beverage costs, labor costs, revenue) was lacking. Irvine also discerned the ownership passion for the motorcycle shop, indicating that similar passion for the restaurant would make the concept “amazing.”

Convening a meeting of the minds with staff and management, he pinpointed operational issues and recommended an increase in the frequency and openness of communication as well as role definition and managerial involvement. He also helped the kitchen staff rework the menu, creating exciting new dishes designed to wow patrons. To increase kitchen cohesiveness, team-building and morale, he asked that they create a team dance. It was one of the more entertaining segments of the show.

The show’s restaurant designer described the restaurant design as “college dormish” and “super macho.” Her goals for the make-over was to “make it cool, rough-and-tough, but still have a feminine touch.” Mission accomplished! The metamorphosed Shade Tree Café was even better than the vision ownership had in mind, described by Irvine as “the coolest place on Route 66.” The redesign inspired a rekindled passion that, coupled with the implementation of sound management practices, promises to restore the restaurant to profitability and prominence.

The Shade Tree Customs & Cafe first launched in February, 2012 before relocating to a larger Nob Hill venue some twenty months later. As its name implies, the Shade Tree is a motorcycle-themed restaurant and custom motorcycle shop within one complex. The restaurant storefront is visible from Central Avenue just a few doors west of Zacatecas Tacos & Tequila. The suite also houses a shop area where Shade Tree builds, sells and repairs custom cycles. Weather permitting, an expansive patio in the alley behind the restaurant extends capacity beyond indoor capacity of 70.

The Cafe portion of the Shade Tree operation offers wide-ranging beer and wine options as well as lunch and dinner menus ostensibly celebrating American biker favorites such as burgers and sandwiches. The Cafe is also open for brunch on Saturday and Sunday from 11AM until 2PM. The menu isn’t overly expansive (five appetizers; four soup and salad options; five burgers, including one custom-made; four sandwiches and three popular entrees) or vegetarian friendly, but it does offer good variety and interesting specials.

A good way to start your dining experience at the Shade Tree is with Spark Plugs, not the humble electrical contrivance that “sparks” to ignite the fuel on combustion engines, but what non-“motorheads” might call a “jalapeño popper.” If that term practically reeks of greasy, breaded, bite-sized stuffed jalapeños, you’re in for a surprise. These spark plugs are baked, not fried, and they’re stuffed with cream cheese and Cheddar topped with bacon bits. The jalapeños aren’t incendiary, a likely consequence of being rather large (generally the smaller the pepper, the more heat it generates). These spark plugs will rev your motor.

One of the Shade Tree’s most popular entrees is the Southern Tasty Chicken (STC), a fried chicken breast served with green chile chutney, smashed potatoes and the veg o’ day. A more portable variation of this “sounds like Sunday dinner” entree is the STC Sandwich, a towering behemoth constructed from a fried chicken breast, Habanero-Jack, Cajun mayo, lettuce, tomato, onion and pickle. Do yourself a favor and dispose of the lettuce, tomato and onion even before biting into the sandwich; their biggest contribution to the sandwich is in providing a cooling effect. The fried chicken breast is meant to be eaten hot with the molten cheeses and Cajun mayo slathered on generously. As far as chicken sandwiches go, in the Duke City the only better option may be at the Stone Face Tavern.

Fortune smiled upon us on the Sunday morning of our inaugural visit when one of the brunch specials was a Southwestern Patty Melt, an Angus patty, poblano, caramelized onions, Habanero cheese and green chile aioli on a brioche bun. Perhaps because the patty is so prodigious, the ostensibly piquant influence of poblano, Habanero cheese and green chile aioli aren’t especially notable. A larger tangle of caramelized onions would also be welcomed. If these sound like shortcomings, kudos are still in order to the Shade Tree for providing a unique take on a sandwich that all-too-often provides a boring sameness from one restaurant to another.

The veg o’ day served with the green chile mac was baby asparagus, as good as we’ve had them anywhere in Albuquerque. Sauteed (probably in butter) and seasoned with black pepper and garlic, they should be made a permanent addition to the menu or at the very least offered as a substitute for the fries served with sandwiches and burgers. These baby asparagus are adult-pleasing good.