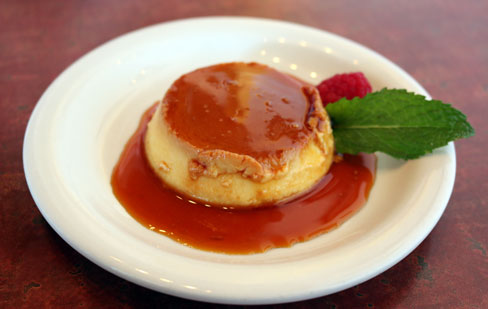 “Edible art” isn’t just some trite phrase pedantic food critics use when food has aesthetic values that delight our senses. Mankind has been been intrigued by the concept of food as art since the dawning of rational thinking. Prehistoric cave paintings such as those in Les Trois Frères in Ariège, in southern France, depict families gathering around the fire to share the foods they had prepared, an event made possible by the discovery of fire. Fire, it goes without saying, was also the catalyst behind men first wearing aprons emblazoned with “kiss the cook.”

Moving past prehistoric taggers scrawling graffiti on cave walls, edible art became more urban when Egyptians painted food on the walls of the great pyramids (ostensibly to nourish the dearly departed who had transitioned to the afterlife). During the halcyon days of the Greek and Roman empires, the depiction of food took on a more realistic tone when glass bowls of fruit were painted to denote the delicacies enjoyed by the one-percenters of the day (and some of those paintings still hang on the walls of many a Midwestern grandmother’s home).

The reverence with which mankind esteems food in art has expanded almost as quickly as our waistlines. Today, depictions of food festoon the walls of restaurants, hotels and homes (not to mention fraternity houses) everywhere. We’re also bombarded with images of food on the sacred altars of our living rooms, the hypnotically mesmerizing 70-inch flat screen televisions which render the Big Mac big once more. It’s apparent we find food not only nourishing, but strangely comforting and soothing. If we can’t have it plated in front of us, we’re mollified by paintings, photographs and videos of food, hence the term “food porn.”

In more civilized cultures, edible art has come to mean actual food (what a concept) plated beautifully…and looking good enough to eat. It’s a concept lost on Andy Rooney, the late curmudgeonly commentator on television’s 60 Minutes. Rooney didn’t like food that’s “too carefully arranged; it makes me think that the chef is spending too much time arranging and not enough time cooking. If I wanted a picture I’d buy a painting.” Japanese diners, for example, not only enjoy, they expect eye-pleasing, artful plating in which everything is where it should be for optimum harmony, balance and appearance, a sort of plate syzygy. The balance of color, texture and appearance makes diners give pause to reflect on how great everything looks before their taste buds confirm what their eyes already know.

Upon learning that a restaurant by the name of “Canvas Artistry” had opened in Albuquerque’s Nob Hill District, my first inclination was “just what we need, another pretentious and expensive restaurant with artistically plated highfalutin cuisine.” That notion was quickly dismissed upon discovering that Canvas Artistry’s chef was none other than Saul Paniagua, a creative culinary genius who can cook high-end stuff with the best of them, but prefers making his delicious creations affordable to the masses.

Chef Saul Paniagua, a name many of you will recognize from his stints at 4 Aces Grill and The Standard Diner among others, is a South Valley native who’s twice left the Land of Enchantment to hone his formidable skills. The first time away from home, he managed the galley (that’s kitchen for you landlubbers) for Norwegian Cruise Lines where his ports-of-call included Honolulu, Hawaii. His second out-of-state foray took him to Joplin, Missouri where he helmed the kitchen at a casino operation and learned that in Missouri, local tastes leaned toward basic meat and potatoes. Though he gained significant experience, his heart lies in the Duke City and with the chile-infused home-cooking with which he grew up.

Canvas Artistry, it turns out, is the realization of a vision shared by Chef Paniagua and his business partner Jesus Gomez. With a September, 2015 launch, the passionate pair began showcasing international street food (think New Mexico meets Asia) in an attractive, comfortable milieu where diners are surrounded by the artwork of local artists. Thematically it works: artistic food and artistic mixology in an artistic, but homey and welcoming ambiance. Fittingly the menu is printed on canvas stretched over a wooden frame.

Located next door to B2B Bistronomy in the remaining half of the space where Vivace was a long-time fixture, Canvas Artistry is open for both lunch and dinner (though you’re well advised to call in advance for a daily schedule). The menu, which will change periodically, offers a variety of tacos with an artistic bent as well as such heretofore unseen in Albuquerque offerings as yogurt chicken banh mi, tempura fried Spam musubi and surf-and-turf corn dogs. At face value, it’s a menu adventurous diners will appreciate most though every diner will find something…make that several things to love.

There could be only one logical choice to join me on my initial excursion to Canvas Artistry, my good friend and trusted insurance agent Ryan Scott. Several years ago, Ryan introduced the world to Chef Paniagua’s talents in a compelling interview for his ground-breaking YouTube TV program “Break The Chain.” Not only is Ryan a huge fan of Chef Paniagua’s talents, he’s the only person I know (save for maybe Andrew Zimmern) who can match me for adventurous eating.

So, what do you get when you put a Broncos (Ryan), Raiders (Chef Paniagua) and Cowboys (me) fan in the same restaurant? A darn good time, for one thing. Great food for another. As is a common practice for both me and Ryan, we asked our server to “just have Chef Paniagua” send out whatever he’d like.” How’s that for adventurous eating? How’s that for trusting that whatever the Chef sends out will be great and that we’re going to enjoy it?

11 September 2015: The first item out of the kitchen was an order of three carne asada tacos? What’s adventurous about carne asada tacos, you ask? For one thing, the carne is porcini crusted flank steak. Chef Paniagua employs molecular gastronomy techniques to grind porcini mushrooms into “dust” which he uses to create a very thin crust for the tender, moist, delicious flank steak. The porcini dust imparts an earthy flavor which melds deliciously with a sweet onion jam, cilantro and the apply-it-yourself smoked salsa verde. The neon-hued salsa is addictive and it packs a piquant punch New Mexicans will appreciate.

11 September 2015: Our second Chef’s surprise was three Sriracha Chicharron Tacos. Chef Paniagua renders the fat from pork belly into golden, crispy crackling bits as texturally delightful as they are delicious. He then introduces just enough incendiary Sriracha sauce to impregnate the chicharrones with a light piquancy. An even bigger surprise are the tempura fried nopales which are light, crispy and thoroughly delicious. These tacos are also served with a smoked salsa verde which is wholly unnecessary. New Mexicans who revere chicharrones as much as other people love popcorn will applaud these tacos.

11 September 2015: Several menu items attest to Chef Paniagua’s tenure on the high seas. Among them are an ahi tuna poke and tempura-fried spam musubi. My previous experiences with “Spam sushi” haven’t been especially favorable courtesy of a pseudo-sushi in dire need of desalinization. With one bite, both Ryan and I pronounced these Spam “maki rolls” the best Spam sushi we’ve had. Neither the vinegared rice, Spam, tempura or honey-soy reduction were salty as you might think they’d be. We also preferred the light tempura to the nori seaweed usually found on musubi. There’s a reason more and more chefs are incorporating Spam into their menus and it’s exemplified in this surprisingly good entree. In its annual Food & Wine issue for 2017, Albuquerque The Magazine awarded Canvas Artistry a Hot Plate Award signifying the selection of its Tempura Fried Spam Musubi as one of the “dishes…that’s lighting a fire under the city’s culinary scene.” Considering the thousands of potential selections, to be singled out is quite an honor.

12 September 2015: Attentive readers know how rare it is for me to make back-to-back visits to any restaurant. It didn’t take much effort for my Kim to convince me that she had to experience Chef Paniagua’s culinary masterpieces once again. As with Ryan, we shared three entrees, the first of which were also tacos. The chipotle-marinated shrimp tacos (roasted corn guacamole, jicama slaw) proved every bit as good as the other tacos thanks largely to large, fresh shrimp which snap when you bite into them. The tortillas, redolent with fresh ground corn come from Tortillera Cuauhtemoc where we’ve been buying our tortillas for years. They’re the very best!

12 September 2015: For years pundits have been predicting the proliferation of the banh mi across the fruited plain, but most have believed its nascent popularity would be courtesy of Vietnamese restaurants. While Vietnamese restaurants have been holding fast to traditions, avant-garde American chefs have been plying innovative ingredients and techniques to the Vietnamese sandwich. Count Chef Paniagua among them. Canvas Artistry offers two variations on the banh mi, one made with yogurt chicken and the other with crispy pork belly. Both are served on a hoagie bun with a Thai chili aioli and pickled veggies. If anything, it’s possible that the pork belly banh mi may be too much of a good thing (and we thought it impossible that you could ever have too much pork belly). The pork belly, delicious as it was, dominated the flavor profile. That’s wholly unlike your conventional banh mi in which ingredients coalesce beautifully to create and share a unified flavor profile.

12 September 2015: Having grown up on a farm in which we raised corn, pumpkins, peas and other vegetables, it never dawned on me that corn at a restaurant could be nearly as good as the corn we baked in my grandmother’s horno, a mud adobe -built outdoor oven. Canvas Artistry’s grilled elotes are nearly as good. Unlike elotes served on a cob, golden kernels from roasted corn are gently scraped off the cob and served generously in a bowl. The corn is sweet and moist, a perfect repository for the Cotija cheese, cilantro lime aioli and Chimayo red chile with which the elotes are seasoned. My Kim loves corn (except on my jokes) and certifies the elotes as swoon-worthy.

11 September 2015: American writer Thomas Merton believed “art enables us to find ourselves and lose ourselves at the same time.” It’s rare that any dish has this profound effect on me, but the salted caramel coconut flan did. Quite simply, it’s the very best dessert of any kind we’ve had this year and one of three flans I’ve ever found to be more than just passable (the other two are at Ben Michael’s Restaurant and Sandiago’s Mexican Grill). Chef Paniagua speaks often and will all sincerity about love being an ingredient in his cooking. Truly love must taste like this flan, a coalescence of deliciousness that will make sweet, slow love to your taste buds.

11 September 2015: Alas, both Ryan and I had so much love for the flan that we didn’t appreciate the truffle trio as much as we otherwise might have. The truffle trio was terrific, a triumvirate of deeply flavored and delicious post-prandial treats: mocha honey truffle, white chocolate pistachio and dark chocolate red chile piñon. The trio’s only fault is that it was served side-by-side with the salted caramel coconut flan so comparisons were natural. Of the three complex truffles, the mocha honey truffle stood out thanks largely to local honey from the South Valley.