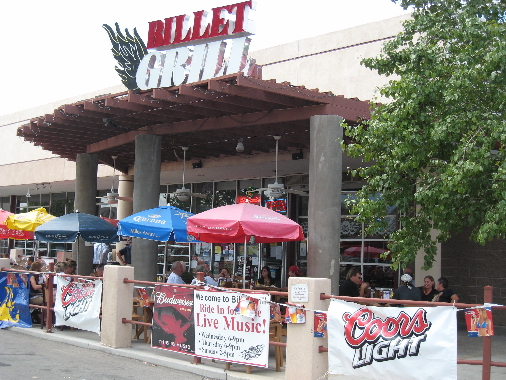 Americana has spawned many unique cultures, counter-cultures and fringe groups. Some of those cultures operate equally well in any spectrum.

Take for example the biker culture in which Fortune 500 executives as well as bandits, desperados and those in between are fervent in their pursuit of two-wheeled motorized activity. This is evidenced by the throngs of bikers on both sides of the law making annual pilgrimages to Sturgis, South Dakota with the same zeal as pilgrims headed to Mecca.

Local bikers have made the Billet Grill (formerly known as the Easy Riders Grill) a favorite dining destination. When it first opened in 2004, it was easier to see why. Diners were surrounded by all things bike thanks to a custom motorcycle shop in the same building. In fact, from the dining area, only glass separated the service area from the dining confines.

Not sharing a passion for the “hawg” we could have done without the view and without the prevailing odoriferous emanation of rubber that obfuscated our taste buds.

The motorcycle shop has been vacant since 2005, the consequences of which are diminished lunch and dinner crowds. The restaurant has plans to move in 2007.

The ambiance isn’t necessarily all “biker bar” (not that I know much about that) though it’s obvious that loud, motorized two-wheeled conveyances play into the theme. A smoking section is available outdoors on the patio.

Thematically, the menu is replete with the vernacular of the mean streets. Appetizers are called “kickstarters,” beverages are “lubricants” and desserts are “ride’s end.” “Three Wheeled Platters” are what the New Mexican platters (blue corn enchiladas, chimichanga and the Billet burrito) are called.

There are six burgers on the menu all named for terms which are probably elementary biker terms: Sportster, Ironhead, Shovelhead, Panhead, Knucklehead and Wild West. While bikers may appreciate the cleverness (ostensibly) of those names, burger aficionados will appreciate the aroma of beef being grilled. It’s like a siren’s call from the moment you begin your trek toward the restaurant though the choking blue haze from the outdoor smoking section may dull your appreciation considerably.

Kickstarters include pretty standard bar appetizers, but it’s always salsa that calls most sweetly. Billet’s salsa is rich, red and chunky. My brother is convinced it’s Pace Picante Sauce, but the fact it doesn’t have an acerbic aftertaste refutes his contention. Besides, no self-respecting restaurant in New Mexico should ever serve Texas salsa.

Sandwiches (mostly accorded biker term names) and burgers include your choice of fries, fried chips, cottage cheese, potato salad or coleslaw. Pity any tough biker who deigns to order cottage cheese at this joint (restaurant may be too proper a name).

The Rolling Rueben, a corned beef sandwich on rye with sauerkraut and Swiss cheese with a “special” sauce is a popular choice, but one we won’t try again, the consequence of over-toasted rye bread and a very weak sauerkraut.

With the exception of the quarter-pound Sportster, all burgers are a half-pound of beef prepared to your specifications. You can “flood” your burger with several extra ingredients for $1.50 more.

The Ironhead (pictured at left) is a half-pound burger with mushrooms and Swiss cheese, a combination we found surprisingly un-macho. The mushrooms are piled high and the cheese may be rubbery, the result of heating it at too high a temperature.

Better is the Panhead burger, a half-pound beef burger with green chile and American cheese. The chile is fairly tepid and wouldn’t register too high on the Scoville scale, but hey, it’s chile and chile makes the world go round.

While the Easy Rider Grill had several hot dogs categorized as “big dogs” the renamed Billet’s Grill has only one–the “hawg dog“, a grilled quarter-pound all beef hot dog. A Chicago transplant I know theorizes that making hot dogs that size is a compensatory behavior and that bigger isn’t necessarily better.

The Hawg Dog lends much credence to that theory. While it’s impressive, it doesn’t have the “snap” that thinner Chicago dogs tend to have. Nor does it have the seasoning and flavor of hot dogs proffered throughout the Midwest.

From among the sides, one with the potential to stand out are the fried chips. They’re thicker than standard potato chips and are crinkled–perfect for scooping up dip. Billet’s does a great job of degreasing these chips and salts them lightly. If they’re not over-baked, they’re a superb side.

The onion rings ($1.25 more) are also quite good. Despite being thickly coated they retain an onion taste. Rings of various sizes are served with each order, hopefully indicating these are not out-of-the-bag onion rings.

According to the Motorcycle Industry Council, there are nearly 9 million motorcycles in the United States and nearly ten percent of them are owned by women. The median age of motorcycle owners is now 42 and the median income of owners is nearly $56,000. It’s an active demographic and while they can call Billet’s Grill their own, it’s a joint anyone can frequent for good burgers and a fun atmosphere.