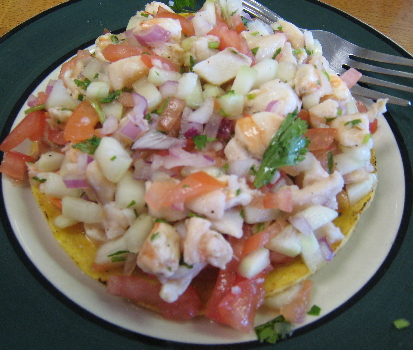 As a precocious product (some might say victim) of the American public school system, I learned more about the geography of old Mexico from one song than from twelve years of the best education our tax dollars can buy.

In that journey, rider and horse traversed through Escuinapa, Culiacan, Los Mochis, Sonora, El Valle Del Yaqui, Hermosillo, Caborca, Mexicali and Rumorosa. How lyrically poetic and cool are those names?

The name Culiacan, I found out, has been translated by some sources as “place of snakes,” as intriguing a city sobriquet as you can have. Culiacan is the largest city in the Mexican state of Sinaloa with a population of more than 600,000.

Situated in northwest Mexico, Culiacan is approximately forty miles inland which is what makes even more intriguing the name of yet another mariscos restaurant in Albuquerque.

Mariscos Culiacan sprung up in seemingly no time at the Sequoia Square plaza in mid-summer 2007, occupying the suite in which once stood a failed Peruvian restaurant. Its business card promises “Autentico Sabor Sinaloense” or authentic flavor of Sinaloa.

In terms of authenticity, no mariscos restaurant in town feels more like Mexico to me than Mariscos Culiacan.

That means music turned up loud on tinny speakers competing with the sound of a television blaring. There’s variety in that competition. While the radio plays Norteno music, characterized by a polka beat created by the accordion and bajo sexto (a unique 12-string guitar), the television is tuned to a program featuring hip hop Mexican videos. It makes for a unique, albeit noisy, ambience.

There is no air conditioning at Mariscos Culiacan. Instead, large floor fans and an ineffective swamp cooler do their best to keep things cool (and thankfully drown out some of the din.

The west wall includes several framed photographs of Culiacan while another wall features framed photographs of several menu items. There are no actual paper or plastic table menus, by the way. A listing of all featured fare is posted above the order counter and it pays to know Spanish because there are no English subtitles. Unlike at other mariscos restaurants in the Duke City, there are also no meat based items on the menu. The marquee reads mariscos and that’s what you’re going to get.

There are three squeeze bottles at each table–mayonesa, ketchup and a bottle labeled “Peligro Salsa Siete Chiles” which means Danger, Seven Chile Salsa. Unlike some Santa Fe restaurants which warn tourists of their hot chile then deliver chile with the potency of tomato sauce, this label means it. This salsa has the kick of an angry mule. Instead of chips, you’re served five or six tostada shells which most diners break into pieces.

Beverages are primarily Jarritos and Coke products bottled in Mexico which means real sugar and really acidic. Soft drink options include a non-diet version of Fresca, a grapefruit flavored soda which was very popular in the early 70s as well as a refreshing manzana (apple) soda. Aguas frescas, not including horchata, are also available.

Tostadas de Ceviche are available in three varieties–pescado (fish), camaron (shrimp) or mixto (a combination of fish and shrimp). Atop a crispy shell are piled fish and shrimp marinated in citrus juice along with red onion, tomato and cilantro. Mexican tostadas are not nearly as brittle as their American counterparts so the entire concoction doesn’t come crumbling down on your lap when you bite into it.

At any mariscos restaurant just about anywhere, at least one diner at each table seems to be partaking of the unique Mexican seafood cocktail called the Campechana. That’s the case as well at Mariscos Culiacan.

Campecana is as murky as some of the water in which the seafood ingredients were caught, but don’t let appearances fool you. This is a fresh and delicious entree, especially if you douse it liberally with some of that Peligro salsa. It’s sweet, piquant, tart and briny all at once.

If raw, yucky looking seafood isn’t your thing, Mariscos Culiacan can accommodate your preference for all things fried.

The camarones Costa Azul (Blue Coast Shrimp) is a very good option. Six giant shrimp (my favorite oxymoron) are stuffed with queso Mexicana then enrobed in Mexican bacon for a taste you’ll risk shark-infested waters to obtain. The bacon is neither too crispy or too flaccid so it wraps around the shrimp perfectly. The shrimp is sweet and succulent with just a bit of snap to each bite.

This entree is served with French fries (out of the bag) and Mexican fried rice with those crunchy little carrot bits.