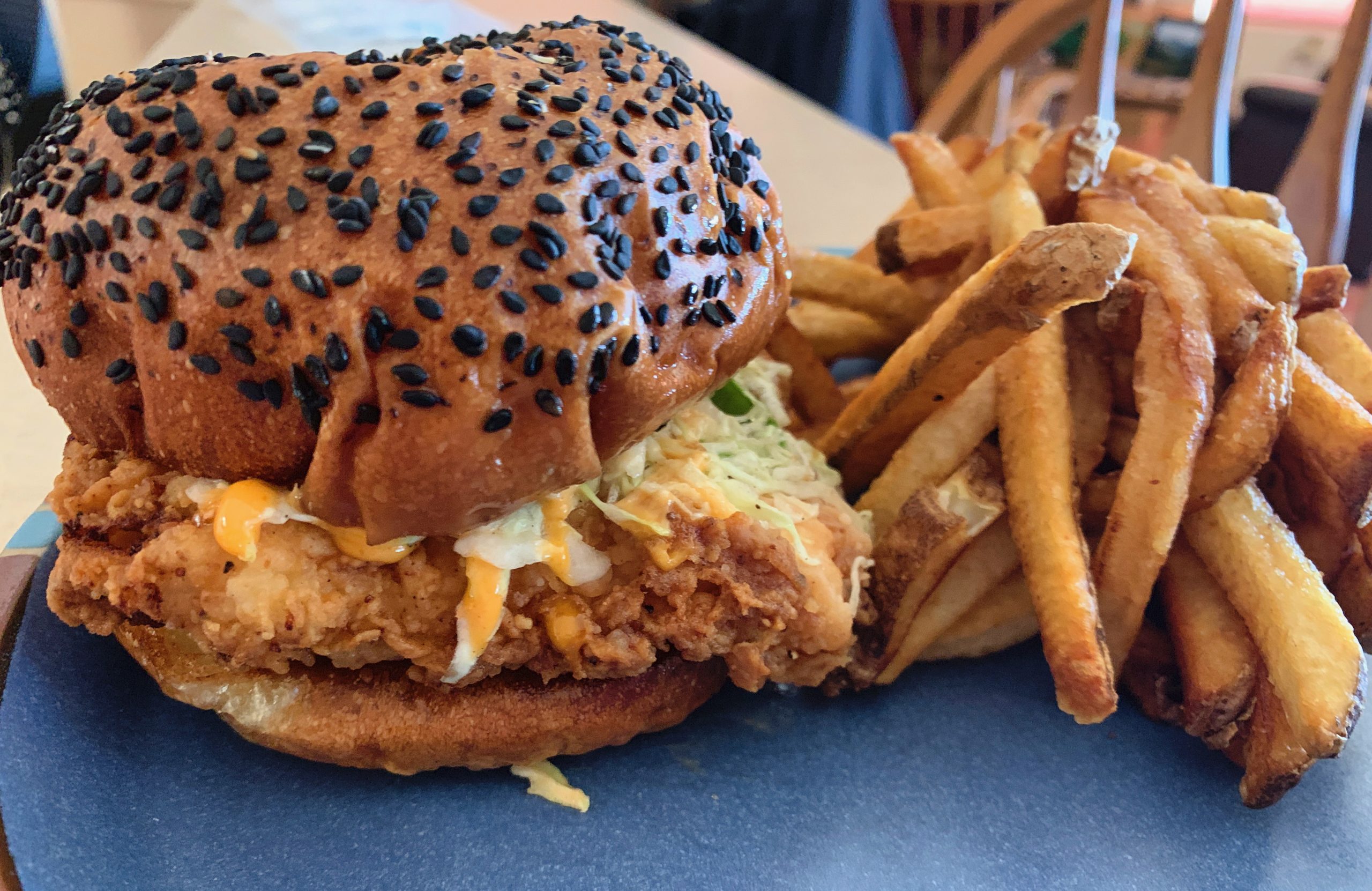 My mention of “fusion cuisine” once brought about the retort “you mean like chocolate and peanut butter” from my former colleague Matt Mauler.  For Matt that magical melding of chocolate and peanut butter is probably as far as he would ever go in culinary exploration.  My counter-argument fell on deaf ears–that cuisine across the world has been made significantly more interesting by the intermingling of culinary cultures.  Moreover, I argued, the convergence of cooking techniques, spices, ingredients and recipes has made food much more delicious.  That may be especially true in cuisines where East meets West.

Contrary to popular belief, fusion cuisine–the deliberate combination of elements from two or more distinct cuisines transcending conventional geographical and historical boundaries–does not have its genesis in the 1970s though the term “fusion cuisine” itself may have.  Some culinary historians believe fusion cuisine took off in the United States in part because of our country’s unique melting pot amalgamation of cultures.  It makes sense considering the proximity of ethnic neighborhoods and intermixing of peoples from diverse culinary traditions.

Interestingly many culinary historians attribute the origin of the world’s first truly global fusion cuisine to the southern Chinese city of Macau, popularly known as the “Las Vegas of the East.”  In addition to being the world’s largest gambling hub, Macau is the city in which Portuguese and Chinese cuisine melded nearly five centuries ago.  The contention that Macau is the progenitor of fusion cuisine is supported by the well-reasoned argument that “until the late 20th century, most cross-cultural culinary exchanges transpired among relatively close neighbors such as the United States and Mexico.”

Culture Trip asserts that “unlike so many of today’s modern East-meets-West recipes that are typically created out of novelty, Macanese cuisine has stood the test of time, with its classic home-style recipes passed down from generation to generation.”   Despite having sampled many interesting and innovative attempts at fusion cuisine over my mere 39 years on this diverse planet, it would presumptuous of me to proclaim that one particular fusion of culinary cultures will have staying power.  I do believe, however, that the broad categorization of “Asian-Southwest” fusion has a chance to stick especially with exemplary practitioners such as Kamikaze Kitchen leading the way.

As with many of the country’s most innovative and daring restaurants, Kamikaze Kitchen got its start as a food truck (that’s mobile kitchen to you, Bob).  Operating out of a white 1987 Ford E-350 box truck and helmed by Chef Nic Riccardi, the food truck began prowling the mean streets of the Duke City in March, 2018, quickly winning over diners with a unique blend of Southwest and Asian inspired fusion items.   Originally from St. Louis, Missouri, Chef Nic fell in love with New Mexico’s sacrosanct green chile whose fiery personality paired quite well with that of the unique St. Louis-style Chinese food.

That fusion has been a marriage sanctified in both the cramped confines of Kamikaze Kitchen’s food truck and the brick-and-mortar establishment Nic and his wife Libbe launched in March, 2020.  Operating virtually from its opening date under shelter-in-place  conditions that limited the restaurant to delivery, call in, carry out and online ordering, Kamikaze Kitchen nonetheless earned “Best New Restaurant” honors in 2020 from from Albuquerque The Magazine readers.  It wasn’t this accolade nor even the promise of the delicious fusion of culinary cultures that prompted my initial visit.

As is often the case, my first visit was inspired by my friend Howie “the Duke of the Duke City” Kaibel, Community Director for Yelp.  During an interview conducted on Sunny 101.3FM which included a discussion about the city’s best fried chicken,  Howie raved about Kamikaze Kitchen’s “mother klucker,” yet another local chicken sandwich far superior to the famous fowl proffered by corporate chains.  On his Yelp page, Howie cited a photo on a Kamikaze Kitchen social media platform, noting that “setting food porn expectations can be risky. Let’s face it, usually, that online fried chicken sandwich photo just doesn’t look nearly as sexy IRL.”  He described the mother klucker as “exceeding expectations,” both in flavor and in appearance.

Certainly one of the most pulchritudinous paragons of poultry you can photograph, the mother Klucker (hand-breaded chicken breast sandwich, fried and topped with an orange house sauce, garnished with Asian slaw and topped with a Sriracha mayo drizzle all served on a black sesame seed brioche bun with fries and a dipping sauce) does indeed exceed expectations.  It definitely belongs on a pantheon of the city’s very best chicken sandwiches, all of which will have you asking “Popeye’s Who?”.  Taking two hands to handle, this towering behemoth is an exemplar of balance in ingredients that work very well together.  The Asian slaw and Sriracha mayo, in particular, bring out the best in the thick, juicy chicken sheathed in a thin yet crackly crust.  The orange house sauce lends citrusy sweet-and-sour notes.

Eggrolls headline the “Awesome Appetizers” menu, a showcase of fusion elements where you can find such exciting and unique items as green chile cheeseburger eggrolls, pizza eggrolls, bacon jam mac ‘n cheese eggrolls, green chile enchilada eggrolls (see why I think Southwest-Asian fusion may have staying power).  Though we hope to try them all in time, our inaugural eggroll experience at Kamikaze Kitchen was with the bacon jam mac n’ cheese eggrolls (house-made queso blanco mac n cheese and savory bacon jam rolled into an egg roll then deep fried, seared on the grill and drizzled with green chile ranch), an unlikely pairing of comfort foods that transcend borders and oceans.  The bacon jam was superb, a melding of smoky, savory and sweet elements that marry magnificently with the creamy, rich mac n’ cheese (which reminded us why increasingly we use Mexican cheeses on burgers, grilled cheese sandwiches, mac n’ cheese and more).

Sometimes my Kim’s adventurousness in trying new dishes surprises me.  There’s no way, I thought, she’d like the egg roll-arito, an obvious portmanteau of egg roll and burrito.  You can’t help but like the egg roll-arito (fortune cookie fried chicken tossed in your choice of house sauce and rolled up in a 14 inch egg roll paper with green chile fried rice deep-fried then drizzled with wasabi mayo and garnished with sesame seeds and green onions), another exemplar of Southwest-Asian fusion.   For one thing, it’s about the size of a small log which means she could make two meals out of it.  For another, it’s just plain mouth-watering.  The fortune cookie fried chicken may have been the biggest surprise in its deliciousness, but not the only one.  That green chile fried rice was terrific, much better than the rice found on Mission-style burritos we’ve had in San Francisco.

With its made-to-order Southwest-Asian fusion cuisine offering explosions of flavor in every bite, Kamikaze Kitchen is poised to help lead the next generation of exciting culinary offerings for adventurous diners.