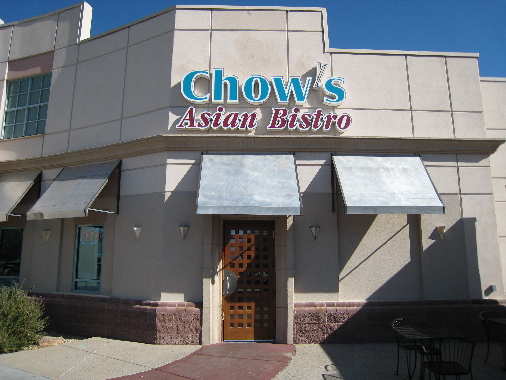 With but few exceptions, the Duke City’s Chinese restaurants have a boring sameness (perpetuating the stereotype that all Chinese food tastes the same) with an increasing emphasis on super-sized portions of Americanized Chinese food (fried, breaded and candied meats of poor quality).  One of the few Chinese restaurants which does not perpetuate that stereotype is Chow’s Chinese Bistro in Albuquerque’s Cottonwood Mall which launched in Albuquerque’s Cottonwood Mall in November, 2005.

Chow’s motto is “gourmet, not buffet.” The Web site promises slight variations in the menu among its restaurants, claiming those variations are suited to the taste buds of the community. That must mean Chow’s patrons like it either very sweet or extremely salty (more on that below).

Chow’s has been the most popular Chinese restaurant in the City Different (not that there’s much competition) practically since it launched in 1992. Accolades festoon the restaurant’s walls.

At the Cottonwood Mall location, Chow’s “East Meets West” fusion concept applies not only to its non-traditional cuisine, but to the restaurant’s ambience. Exquisite Chaco style stonework melds with Asian art and faux dynastic period vases to form an elegantly appointed setting.

The restaurant exudes class with its subdued lighting, attentive service and comfortable, well spaced seating. The Juan Tabo location, while not quite as stylish is also pleasing to the eye.  An inventive, contemporary menu offers an energizing departure from the oh so mundane Chinese cuisine proffered by most Chinese restaurants.

While some items (such as the ubiquitous sweet and sour chicken) are standard fare in America’s Chinese restaurants, an emphasis on presentation is apparent when these dishes are brought to the non-adventurous diners who order them.  Chow’s plating is esthetically pleasing, providing a visual appeal that heightens a diner’s anticipation.

One commonality among some of the appetizers and entrees at Chow’s is the liberal application of sauces, some of which are so cloying that the American Dental Association should take note. Subtlety is not among any of the sauces’ traits. They do make your taste buds take notice–not necessarily in appreciation. Some are wholly lackluster and others dominate the entrees they’re supposed to showcase.

When the Cottonwood version of Chow’s first launch, it served ranch style rolls, with an anemic wasabi sesame sauce, a boring misnomer unworthy of the name wasabi. This sauce had the kick of a legless mule.  Despite the boring sauce, the beef, celery and green onions on the spring rolls are delicious, making these spring rolls are first-rate. Fortunately a more taste bud inspiring orange ginger sauce is now served with those excellent spring rolls.

The restaurant’s two dumpling appetizers are infinitely better. The firecracker dumplings are boiled and stuffed with carrots and ground turkey then topped with a bright green spinach pesto that has a surprising kick.

More deserving of the “firecracker” name are the peek-a-boo dumplings, boiled chicken dumplings in a spicy sauce heavy on soy sauce, scallions and chili. It’s a sauce that livens up even the brown or Jasmine rice.  It’s a sauce that saved a dinner special of lemon pepper salmon with tempura shrimp (pictured at left) served with a coconut lime sauce. While the lemon pepper salmon is just fine, you’re better off discarding the listless sauce and asking for the peek-a-boo sauce.

Some entrees, like the Orange Peel Beef, Dragon Sesame Chicken and even the usually incendiary Kung Pao Chicken are almost exceedingly sweet.  The lacquered duck comes with a boring plum sauce we found so lifeless that we asked for the sweet and sour chili wing ding sauce which at least has some life to it.

An interesting entree variation is Chow’s Coffee Chicken, stir-fried chicken rubbed with French coffee and glossed over heavily with a “sweet spicy sauce.”  When the menu indicates “sweet spicy,” it means mostly sweet. If you find any spice, it will be in accidentally masticating one of the tear-inducing chili peppers used on some entrees.

By now you’ve probably got the picture that Chow’s sauces, especially the sweet ones, aren’t to our liking. When we want sweet, we want dessert. Fortunately Chow’s excels at dessert, but first a momentarily dalliance.

In Chow’s green bean chicken, you’ll find what is conceivably the saltiest dish in Albuquerque. Green beans. Chicken. At any glance, that sounds like a healthy, delicious dish and, in fact, the menu indicates it is the staff’s favorite dish.  Israel has developed technology to desalinate the Dead Sea. It’s very much needed on this entree which is not only replete with salt, but the chief ingredient in the “black beans and brown chili sauce” promised appears to be soy sauce.

As with many Asian restaurants, Chows dessert assembly includes green tea ice cream, but there are better options–such as one of the five different mousse-based desserts.

The Marquise Au Chocolat earns its pedigree with an adult chocolate (translation: mostly dark chocolate) blend of chocolate genoise, chocolate ganache and baked hazelnuts topped with a mini chocolate leaf. It’s a timbale-shaped dessert far less cloying than some of the restaurant’s sauces.

In some respects Chows may remind you of the overwhelmingly popular P.F. Chang’s, but it is far less gaudy and not nearly as boisterous. Like P.F. Chang’s, Chow’s does excel in presenting a visually appealing menu seemingly dominated by Americanized Chinese food sweetened and sauced to American tastes.