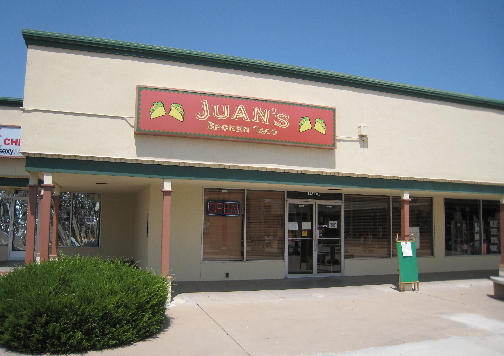 Fusion–the inventive combination of diverse, sometimes disparate culinary traditions, elements and ingredients to form an entirely new genre–has yet to become commonplace in the Land of Enchantment

Some restaurants in New Mexico have dabbled in their conception of fusion, primarily by offering dishes from several southeast Asian countries alongside one another as well as dishes that are “inspired” combinations of those countries’ cuisines.

In large metropolitan areas, particularly in California, restaurants featuring the melding of French and Chinese cuisine are especially popular.

Albuquerque has one restaurant in which that rarest of fusion can be found. To be honest, it’s not the wholly disparate cuisines of New Mexico and Romania that are featured. The fusion is in the ambience at Juan’s Broken Taco.

Juan’s Broken Taco is housed in the edifice which once served as the home of Baciu’s Bread and Wine, the popular European style restaurant operated for years by Romanian expats Nellu and Elena Baciu. When the Bacius abandoned their restaurant, they also left behind many of their unique decorating touches.

The Bacius not only offered a more relaxed pace of dining and exceptional service, they provided a stunning visual array of unique decorative touches. Framed copies of European masterpieces, mirrors, figurines and statues, decorative china and artificial greenery strewn throughout the restaurant provided an eccentrically charming, albeit somewhat cluttered milieu in which to dine.

Today, many of the Baciu treasures remain in place at Juan’s Broken Taco. You don’t have to look too closely to find New Mexican iconography such as chile ristras, native American pottery and even the multi-hued felt Mexican sombrero.

Patriotic touches abound, too. The flag of the United States hangs on a wall opposite the flag of New Mexico. The glass counter where you settle your bill includes red, white and blue ceramic figurines of the donkey and elephant, the symbols of the Democratic and Republican parties respectively.

Ironically Juan’s Broken Taco also supplanted the Bacius at their first restaurant in an Albuquerque strip mall on Menaul. In 1998 when the Bacius left Albuquerque for a few years, Juan’s took over the space vacated by the Bacius. Juan’s would remain there until the Bacius second departure from the Duke City again provided the opportunity to land in an established restaurant space.

Juan’s Broken Taco is locally owned and operated by Dolores and Juan Lopez who are as nice as can be. In fact, one of the highlights of a meal at their restaurant is the service which is, if not attentively European, is capable and friendly.

The “Broken Taco” in the restaurant’s name may be a bit of a misnomer because the crisp tortilla shells aren’t broken; they’re cut in half. At eight inches in diameter, they’re also almost twice the size of a conventional taco.

The shells are made on the premises by deep-frying flour tortillas. Not only are they infinitely better than the Taco Bell variety hard-shelled tacos, they hold up very well against the substantial amount of ground beef, lettuce, tomato and cheese on each taco.

Each order of Juan’s broken tacos is four to an order if you consider that each taco is cut in half. Your order also comes with rice and beans along with salsa. My only snipe at the tacos is that they’re essentially buried under the lettuce and tomato garnish. It’s almost salad like in proportion.

As for taste, it’s easy to see why the eponymous tacos are so popular. The ground beef is seasoned very well and shredded cheese goes well with just about everything. The salsa is fresh and lively, albeit not especially piquant. It’s also a bit on the watery side so it may drip off your tacos onto your clothing if you’re not careful.

The best thing about the salsa is that it’s made with plenty of green chile instead of jalapenos. Green chile lends salsa a richer, more refined and less acidic taste to salsa than the more common jalapeno.

An order of chips and salsa includes crisp, thin and flat tortilla chips. Considering the watery consistency of the salsa, scoopage is a challenge.

The menu includes just about all the New Mexican favorites plus a few surprises such as Chilacas. Juan’s rendition of this popular dish starts with four “broken” corn tortillas on top of which are stacked bean and beef smothered in chile. It’s not quite enchilada and not quite casserole in consistency, but it’s quite good.

The chile is only mild in piquancy with neither the red or green having a discernable edge over the other in terms of bite. The chile is strictly vegetarian.

One of the best dishes with which to experience the chile is with beef enchiladas (rolled) served Christmas style (red and green chile) with a fried egg (over medium) on top.

One of the things that stands out about these enchiladas is that they’re served hot with wisps of steam wafting toward your eagerly awaiting nostrils. I’m always dismayed that restaurants would serve New Mexican food lukewarm when it takes just a bit more effort to serve it hot.

The enchiladas are not only hot, they’re absolutely delicious. The beef is well seasoned and generously rolled into each rolled shell. Shredded cheese is added afterwards and it melts beautifully on the dish. With more piquancy in the chile, I’d rate these enchiladas with the best in town.

Plates are served with sopaipillas and real honey, not the honey flavored syrup some restaurants serve. The sopaipillas arrive at your table piping hot, the perfect receptacles for honey.

Juan’s Broken Taco is one of Albuquerque’s unique gems, a homey restaurant with the incomparable tastes of New Mexico and the classic European feel of Romania.