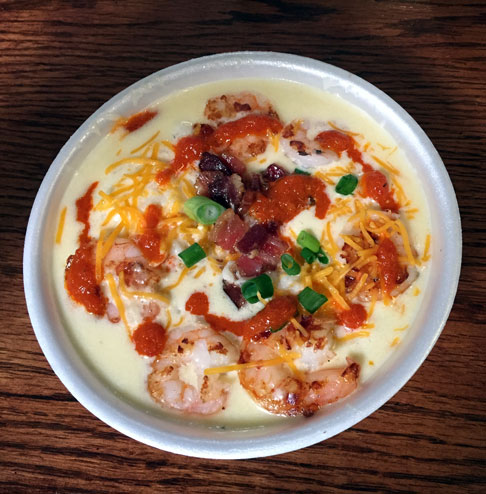 On December 20th, 2014, a part-paean, part elegy graced this blog. The opening stanza read: “Supper Truck, I hardly knew you! Inexplicably and to the detriment of my taste buds, I didn’t partake of your delightfully creative interpretation of Southern cuisine until your very last day of serving Albuquerque. So, why do I miss you so much already? Most likely it’s the lost opportunities to partake of Southern cuisine inspired by the dynamic food truck scene of Charleston, South Carolina, one of my very favorite culinary destinations in America. It begs a paraphrase of a time-honored question is it better to have loved and lost the chance to further enjoy your edgy, contemporary, fusion twists on classic Southern comfort food favorites than never to have loved them at all?”

To write a second chapter about the Supper Truck is to write a tale of rebirth, of starting over. Some six months after our inaugural visit, founding owner Amy Black sold both the truck and naming rights to Kristen Galegor and Claude Freeman. Because Amy had emphasized she wouldn’t sell until she found “the right person with the rare combination of drive, creativity and community-mindedness” which epitomized her purview, Duke City diners have every reason to be optimistic about the future of one of the city’s stellar mobile kitchens. Kris and Claude seem primed to deliver as The Supper Truck Web site indicates: “Claude and Kris have kept the fan favorites and are working to expand this creatively Southern menu. The pair have many years experience in restaurants and are the visionaries of what SUPPER is to become!

The Supper Truck rolled into town in September, 2012, inviting Duke City denizens to “put a little South in your mouth.” Savvy diners (in whose ranks I obviously don’t belong) responded immediately and with a rare fervor, according “best of the city” honors in both the Alibi and Albuquerque The Magazine‘s annual “best of” issues for 2013 and 2014. More than perhaps any other motorized conveyance in Albuquerque, The Supper Truck brought people together, its crepuscular rays seemingly beckoning the city’s hungry huddled masses yearning for great Southern cuisine.

Fittingly, The Supper Truck served its last meals while parked on the south side of the Marble Brewery on an unseasonably warm Saturday. For regulars the event was akin to one last pilgrimage to a beloved culinary shrine which had assuaged their hunger and pleased their palates for more than two years. For newcomers (like me) and curiosity-seekers wondering if The Supper Truck warranted all the hullabaloo, it was an event that would ultimately leave us with mixed emotions–regret for not having visited sooner and sheer pleasure for having partaken of a rare excellence in esculence.

20 December 2014: The South takes its grits very seriously–so much so that unbeknownst to Yankees and those of us not blessed to have been born in the South, there are ten commandments of grits. One of the principle commandments considers it blasphemous to eat Cream of Wheat and call it grits. The Supper Truck’s grits are every bit as good as the best grits we enjoyed while living on the Mississippi Gulf Coast for nearly eight years. These gourmet-quality grits are made with grilled shrimp, bacon, roasted red pepper coulis, green onion, parsley and white wine cream sauce over creamy stone-ground South Carolina grits. They’re so good even Yankees will enjoy them.

20 December 2014: While the Old South tends to hold fast to tradition, the contemporary South has embraced change, particularly in the culinary arena. At the forefront of this evolution is the city of Charleston, South Carolina (where Amy cut her teeth) which has become a bastion of culinary expansiveness. Though Charleston has a very vibrant Vietnamese culinary community, it’s unlikely they’ve seen anything like The Supper Truck’s South Carolina meets Vietnam offering of a fried chicken banh mi. Yes, a fried chicken banh mi. The canvas for this unlikely but uncommonly delicious sandwich is a fresh, locally-baked baguette into which are piled-on house-seasoned fried chicken, pickled daikon and carrots, cucumber, jalapeño, cilantro and a housemade momo sauce of Sriracha, mayo and lime juice. It’s one of the best banh mi we’ve ever had. Ever! Anywhere!

20 December 2014: The Supper Truck’s tacos are on par with Cafe Bella’s street tacos and the scallop tacos at Eli’s Place (formerly Sophia’s Place) as my favorite tacos in the metropolitan area. Traditionalists might decry them as nontraditional and unconventional even as their taste buds experience one foodgasm after another at every bite of their sheer deliciousness. The shrimp taco ( grilled shrimp, Sriracha sour cream, Asian slaw, pickled red onion and cilantro on a grilled corn tortilla and the BBQ beef taco (Coca-Cola braised New Mexico beef, Sriracha-Hoisin bbq sauce, Asian slaw, pickled red onion, cilantro on a grilled corn tortilla) don’t even need red or green chile to make them addictive. It’s heartening to know Duke City diners won’t have to miss out on these gems.

20 December 2014: Among foreigners (anyone who’s not from the South), boiled peanuts (sometimes called goober peas) may just be the most hard to grasp of sacrosanct Southern culinary traditions. In the South, unroasted and unshelled peanuts are boiled in salt water for hours, rendering the peanuts soft and salty. Then they’re consumed while still hot and wet. The Supper Truck’s boiled peanuts are terrific, the type of snack you might offer friends in hopes they’ll snub it so you can enjoy them all yourself.

26 November 2016: Our second visit to The Supper Truck also took place at the Marble Street Brewery, albeit the Westside version of the popular watering hole. Similar to its elder sibling, the Westside location invites food trucks to park on its premises and feed its patrons. The Supper Truck doesn’t often frequent the Westside Marble Street, but its reputation preceded its November, 2016 as long lines of hungry diners will attest. Kris was very effusive about some of the civic projects in which The Supper Truck crew has been involved and raved about an online commercial for eHarmony in which Supper Truck made a brief cameo appearance. More than anything, she waxed enthusiastic when discussing how well the new owners have been received.

Credit much of that reception to the graciousness of the Supper Truck crew and to the continuity of Amy Black’s creatively Southern inspired fusion cuisine. Southern fusion is very much in evidence, especially the fusion of Southern elements with Vietnamese, New Mexican and Mexican ingredients. The South meets the Far East in such daringly different items as the fried chicken banh mi and Vietnamese beef and grits. New Mexican beef finds its way into several items, among them BBQ beef tacos and borrachitos (more on them later).

26 November 2016: John T. Edge, the director of the Southern Foodways Alliance and author of Fried Chicken: An American Story calls chicken and waffles “a Southern dish once or twice removed from the South,” meaning it’s “a dish most popular among Southerners now living in urban areas.” Though the unlikely combination of fried chicken and waffles was popularized largely in restaurants throughout Los Angeles and New York City, today that pairing can be found virtually everywhere–even in food trucks. It should come as no surprise that the Supper Truck’s version is terrific even if served on a paper vessel. Available in quantities of two each pieces of chicken and waffles, this terrific twosome will make a Southerner of us all. Though the fried chicken is boneless, it is still quite good with a crispy, golden hue sheathing tender white meat. The waffles are roundish and on the small side. They’re slathered with peach butter and syrup dusted with confectioners sugar and topped with strawberries.

26 November 2016: Spanish-speaking New Mexicans tend to ascribe small size, youth, affection or contempt to objects and people by appending their names with the suffix “ito.” A short man named Juan, for example, might be called Juanito. We had to wonder what the heck a “borachito” might be. Being that a drunk is a borracho, could a borachito be a small drunk (and why is it spelled with only one “r”? It turns out a borachito is a deliciously different burrito (unwrapped below) constructed on a large flour tortilla engorged with Coca Cola braised New Mexico beef with rich Vietnamese flavors, Cheddar, fries, sriracha sour cream and cilantro. The diminutive terminology is out-of-place considering the size of this behemoth. Its size is matched only by the flavorful melange with sweet, savory, tangy and piquant profiles. Very much in evidence on the beef, in particular, are bold Vietnamese flavors. The fries are an interesting foil which works very well with other ingredients.

The Supper Truck Web site advises diners to “Be prepared to pull out your first aid kit because your mind will be blown when you experience the taste of SUPPER. Keep your eyes open for what’s to come!!!” That’s pretty good advice from a purveyor of deliciousness we’re glad to have back serving the Duke City.