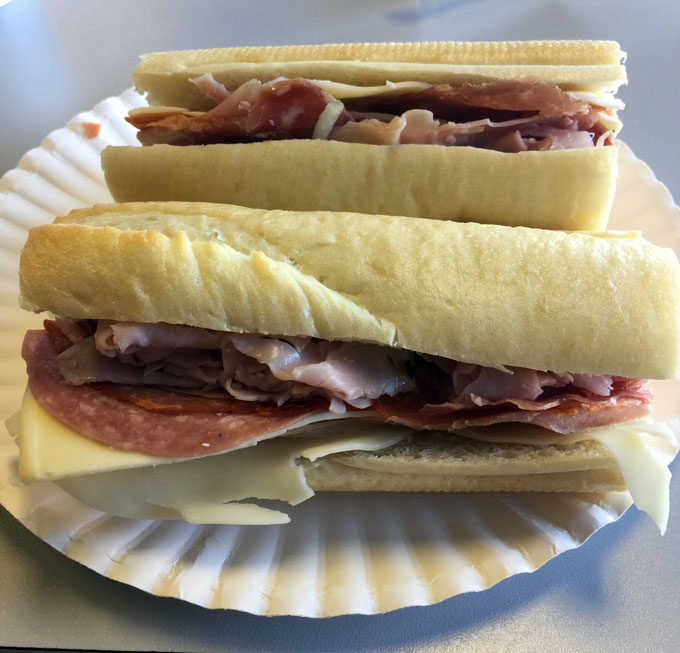 If you’ve ever wondered why New Yorkers fold their pizza slices in half lengthwise (aka the “fold hold”) and if you’ve ever attributed that practice to Big Apple quirkiness, you owe it to yourself to visit Richie B’s, a New York-style pizzeria on Montgomery and Louisiana. Now, the Albuquerque metropolitan area has plenty of claimants to New York-style pizza, but can you name a single one in which you’ve actually HAD to utilize the fold hold to eat a slice? New Yorkers have mastered the fold hold because true New York-style pizza is thin-crusted and cut into wide slices (usually wider than your face) which taper down to a perfectly pointed (and invariably “floppy”) bottom.

I’ve seen friends and colleagues employ the fold hold simply to double the amount of pizza they can consume in one bite (then wonder why they finished off their pizza twice as fast). I’ve also seen them utilize “The Travolta” method—layering one slice on top of another and eating both simultaneously—again, to double the amount of pizza in each bite. I’ve also seen the more “civilized” (or haughty) among us (Mayor di Blasio should be impeached for doing so) use knives and forks on a slice; they’ve obviously forgotten or don’t care that God intended for pizza to be a finger food. NOTE: If you’re not acquainted with “The Travolta” method, you may not have been paying close attention to the opening sequence of Saturday Night Fever.

8 June 2015: At Richie B’s, each slice is so large and so wide that the holding and eating method which makes most sense is the fold hold. It’s not only the best way to trap the prodigious toppings, gooey cheese and dripping sauce within its crusty confines, it’s also the only way to avoid the mess made by an overloaded pizza on a thin-crusted slice. At Richie B’s, the slices are very thin, very wide and very overloaded. That’s especially true of the aptly named Supreme, a beauteous behemoth topped with Italian sausage, pepperoni, mushrooms, onions, red peppers and olives, all with the sheen of olive oil and garlic.

It’s humanly impossible to pick up, hold and consume the Supreme unless you actually fold it in half lengthwise. For one thing, the only triangle-shaped man-made object that’s larger is the Great Pyramid of Giza. Because of the length and width of each slice coupled with the generosity of ingredients piled on, physical laws dictate that each foldable slice flops, not unlike a fish out of water. This is the antithesis of the ironing board stiff pizza crust that won’t buckle under a ten-pound weight. Not even the cornicione, an Italian term for the “lip” or puffy outer edge of the pizza, is stiff.

We’ve established that Richie B’s pizza is long, wide and floppy. That’s a given for many New York-style pizzas. “How does it taste?” you ask. Ann Marie Allen, who called me out on Zomato and recommended I get myself “over here pronto and review this place” says it’s “fantastic and the best pizza I’ve ever had!” Similar rousing endorsements adorn both Zomato and Yelp. My preliminary assessment is that this is a very good pizza, but it’ll take a few more slices to gauge its nuances. It’s a tough job, but someone has to do it.

As for its authenticity, Richie B’s is true New York by way of Dothan, Alabama brought to you by an Albuquerque native. That would be Preston Smith who was working as a contractor at Fort Rucker, Alabama near Dothan where he discovered the original Richie B’s and “the best pizza I’ve ever tasted.” He also struck up a friendship with the owner, an entrepreneur-showman whose career path included a ten-year stint portraying Conan the Barbarian at Universal Studios. Before moving back to Albuquerque, Preston purchased the naming rights and recipes. The rest, as the proverbial “they” say, is history. Should Richie B’s do as well as Preston expects, he hopes to expand throughout the Duke City.

To say Preston is passionate about pizza is an understatement. For his venture, he chose a deck oven instead of a conveyor oven. Deck ovens are generally the oven of choice for traditional sit-down pizza restaurants. They require much closer babysitting than conveyor ovens, but tend to distribute heat more evenly and give the pizzaioli greater control over temperature and air flow. It makes a great difference. Preston is also very passionate about Richie B’s “Viper Sauce” which can be used on virtually everything (much like green chile) save for dessert.

Richie B’s menu lists six custom pies available in 18- and 25-inch sizes. Also available are three twelve-inch sub sandwiches, two of which feature Boar’s Head meats. The other is a Philly cheesesteak. Also on hand are a garden house salad and a number of sides (including whole garlic pickles and stuffed cherry peppers) as well as cannoli and New York-style cheesecake. Although not expressly stated on the menu, Hatch green chile (from the Young Guns folks) can be added to virtually anything else on the menu.

It would be audacious and probably laughable (much like Denver declaring its green chile the equal of New Mexico’s) to proclaim Phillys in Albuquerque the equal of or superior to those in Philadelphia, but we’ve got something even the City of Brotherly Love doesn’t have. Albuquerque adorns its Phillys with green chile, an ingredient which improves everything with which it comes into contact. Restaurants such as Philly’s N Fries and Davido’s Pizza & More have made Green Chile Phillys an edible art form.

12 June 2015: You won’t find a Green Chile Philly at Richie B’s, but you can certainly request chile on the restaurant’s twelve-inch Philly Cheesesteak (grilled top sirloin, onions, mushrooms and sweet peppers topped with mozzarella and Provolone cheese served with a side of Viper Sauce. It’s a very good sandwich bringing together ingredients meant to be together.  In its annual Food & Wine issue for 2018, Albuquerque The Magazine awarded Richie B’s a Hot Plate Award signifying the selection of its Philly Cheesesteak as one of the “delectable treats that are must-haves for any foodies.” Considering the thousands of potential selections, to be singled out is quite an honor. The Viper sauce, while more than interesting, is wholly unnecessary. It’s an excellent dip for the onion rings, one portion of which will serve a family.

30 November 2016: If, like me, you’ve ever lamented getting a veritable salad’s worth of lettuce, tomatoes and onions between bread when you order a sub, you’ll appreciate Richie B’s Italian Sub (thin-sliced ham, Genoa salami, prosciutto, capocalla, sopressata, pepperoni, mortadella, provolone, white American, onions, pepperoncini, sweet peppers, seasoned oil and vinegar dressing). Nowhere on the ingredient list will you see lettuce and tomatoes, the two banes of Duke City sandwiches. This is one meaty sandwich, emphasis on the word meaty. Those meats aren’t rendered virtually tasteless by the overly generous presence of lettuce and tomatoes. Instead, the sweet peppers, pepperoncini and onions serve a very complementary role that allow the meats to shine. This is an Italian sandwich made the way many of us would create our own. It’s a twelve-inch beauty constructed on a soft sub roll.

Richie B’s is located at Louisiana Plaza in a storefront that’s somewhat obfuscated from both Montgomery and Louisiana, but Duke City pizza paramours will discover it and they’ll return in droves for a pizza they’ll have to employ the fold hold to eat.