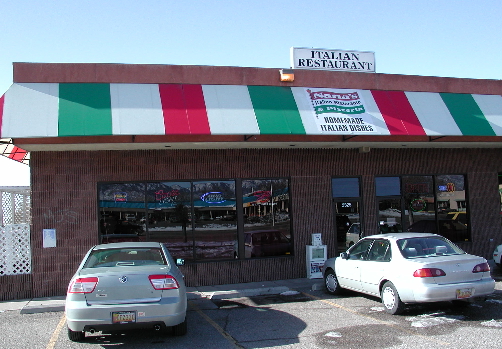 What’sa matta you, hey! Gotta no respect, whatta you think you do, Why you looka so sad? It’s-a pretty bad, it’s-a not-a nice-a place, Ah, shaddap you face!

Joe Dolce will just have to forgive me for the liberties I took with the lyrics to his worldwide 1980 number one song Shaddap You Face.

Slightly altered, those lyrics express my sentiments when the airwaves are polluted with saccharinely mushy, accordion accented commercials for Italian chain restaurants–commercials like the one in which a small lad escorts his elderly uncle from Italy to Olive Garden for a birthday dinner. You can almost imagine the dumbfounded, aged paisano muttering “stunad” under his breath as he chokes down pasta and longs for the return trip home.

Sadly, when Albuquerque’s citizenry thinks Italian food nowadays, they think the Olive Garden, Buca di Beppo, Zio’s Italian Kitchen, Johnny Carino’s and even Pizza Hut. The promise of Italian ethnicity–even the inauthentic parody pitifully proffered by the chain restaurants–remains a marketable concept that draws hungry hordes. Albuquerque, like much of America, has settled for a parade of institutionalized pre-cooked, frozen-shipped Italian food mediocrity. Thousands of the Italian emigrants who were processed through Ellis Island must be gesticulating wildly in their graves at what has become of their cherished cuisine.

The immigration certificate of one of those Ellis Island emigrants used to hang on a wall at Nana’s Trattoria & Pizzeria–a restaurant for which she was the inspiration, Bob Felice launched Nana’s in the mid-1990s in honor of his grandmother Concetta “Nana” Fillciotto who passed away in 1997 at a youthful 104. It is the type of restaurant which serves the type of authentic cuisine that celebrates his nana’s Italian culinary heritage.

In 2008 Felice sold Nana’s, but you get the feeling her spirit remains.  Perhaps just as important, Nana’s long-time chef is the new owner of the restaurant which means the authenticity for which Nana’s is renown is assured.

That means rich red tomato sauce NOT spiced liberally with garlic and basil, a preponderance of pasta and generous portions at reasonable prices. In America, it has also come to means a stereotypical thematic red, white and green accented ambience and being surrounded by the distinct sound of sappy romantic tunes performed by Italian crooners to accordion accompaniment. Still, that’s a small price to pay for the unmistakable aroma of great food wafting from an open kitchen.

Despite its concessions to American expectations, Nana’s is as real as it gets. There is no pretense to offering “Northern” Italian food, a supposedly more sophisticated label. Nana’s features Southern Italian cuisine which means a greater use than its Northern brethren of the ubiquitous tomato and a predilection toward mozzarella cheese, olive oil and dried pasta.

Okay, so toasted ravioli (first prepared in 1943 in St. Louis, Missouri) didn’t originate in the old country, but it certainly was Italian inspired. Nana’s toasted ravioli appetizer features four iPod-sized, meat-filled raviolis covered in seasoned bread crumbs and deep fried. Served with marinara sauce, it is (according to our waitress) the restaurant’s most popular starter. It’s also a very good introduction to a very filling and good meal.

If toasted ravioli isn’t quite enough for you, Nana’s offers an appetizer sampler featuring a triumvirate of fried and breaded Italian artery cloggers–fried mozzarella, fried mushrooms and fried zucchini.  This trio been de rigueur stuff in Albuquerque’s Italian restaurants since the 1970s, but judging from their continued popularity, these fried favorites will endure any fitness and dietary craze.

Most dinner entrees are accompanied by your choice of soup or salad. The salad is pretty elementary stuff–lettuce, tomato onion and dressing–but the chicken noodle soup borders on sublime. A bowl of the hearty soup is replete with chunks of perfectly cooked carrot, celery and onions. It’s the type of comfort-food soup that warms the cockles of your heart and thoroughly pleases your taste buds.  The olfactory arousing aroma emanating from this soup includes sweet, pungent Italian oregano which is added liberally by the chef.

The other soup is minestrone, a soup I consider the “Spanish rice” of Italian foods.  Just like the ubiquitous (in Albuquerque at least) Spanish rice, minestrone soup usually doesn’t leave much of an impression, perhaps other than for the temperature at which it is served.  It’s usually good enough, but you rarely hear anyone comment about a great minestrone.  Nana’s minestrone is similarly unremarkable.

One of the best things about Nana’s is the Italian bread served with most meals.  It’s sliced thick and is perfect for either butter or for dredging up some of the marinara or meat sauce.  Eat too much of it, however, and you just might fill up before the entrees arrive.

Nana’s sampler, a bounteous platter of eggplant parmigiana, spaghetti, manicotti and lasagna is big enough for two or three famished eaters, but might also provide two days worth of wonderful leftovers for a single diner. The lasagna–rich layers of pasta, mozzarella and ricotta cheese topped with a homemade marinara sauce–is gigantic with a wonderful melding of flavors. The eggplant parmigiana is quite good and the spaghetti with either marinara or meat sauce is passable.

When Nana’s menu refers to the manicotti as “the best,” it’s not braggadocio. It’s a claim that any diner will substantiate with one bite. Fresh, homemade pasta crepes are generously overfilled with a special blend of rich ricotta cheese and herbs then topped with meat sauce. What makes this dish so decadent and special is the light and fluffy ricotta which Nana’s obtains from New York and “cuts” with lesser brands of ricotta so as not to overwhelm diners with its richness. The wait staff is inundated with praise for the manicotti and questions about that ricotta.

Another salute worthy entree is Nana’s pizza.  It’s some of the best pie in town.  As the image below shows, it’s got plenty of those puffy bread pockets that seem to hold in the steamy bread flavor that defines a great crust.  That crust also has plenty of char which means the pizza is done well.  Ingredients are first-rate and the green chili (Nana’s spelling, not mine) even has a nice roasted flavor, albeit with little piquancy.

Here’s an audacious claim to illustrate how highly I regard Nana’s pizza–it is the best breakfast pizza in Albuquerque.  If anything, the pizza is better cold–even after a day’s refrigeration–than right out of the oven.  Order a large pizza, have a slice or two at the restaurant and take the rest of it home for later.  You’ll thank me for that.

That ricotta you’ll love on the manicotti is prominently featured on perhaps the very best chocolate cannoli we’ve sampled in New Mexico. The deep-fried, tubular-shaped pastry shells are filled with sweetened and whipped ricotta then topped with a chocolate layering.

There’s certainly something a matta with you if you can’t find something wonderful at Nana’s.