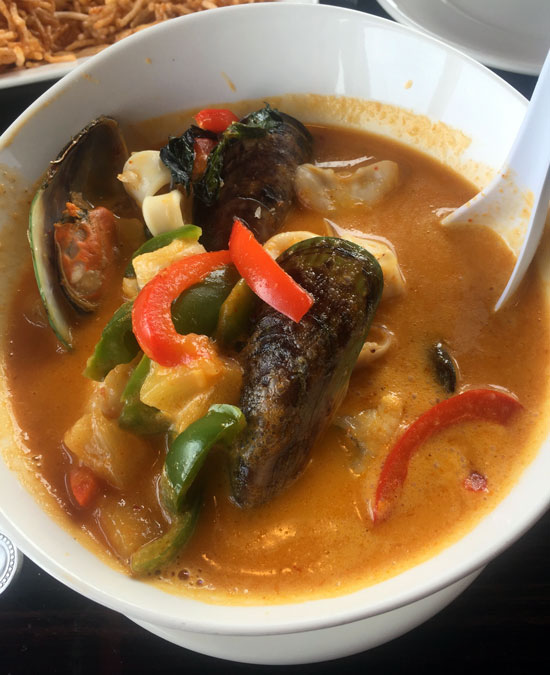 Many of us with a puerile sense of humor can probably recall giggling like silly school kids the first time we visited a Thai restaurant and perused a menu. We went straight into the gutter the first time we came across such foods as phat prik and fuktong curry. Even after learning that “phat prik” is actually a stir-fried chili dish and “fuktong curry” is a pumpkin curry, the sophomoric among us couldn’t order these dishes with a straight face. It gets even worse when we actually learned how to pronounce the names of Thai dishes. Not even Bob Newhart could order “cow pod guy” (chicken fried rice) or “cow pod moo” (pork fried rice) with his usual deadpan delivery. That’s probably why so many of us will place our order by number instead of endeavoring to pronounce words we find a bit salacious or humorous.

Let’s face it, denizens of the fruited plain tend to find the names of some Thai dishes humorous because the way they’re spelled or pronounced is similar to English sexual references or swear words. Perhaps that’s why Thai restaurateurs tend to use clever word play, typically puns, to name their eateries. Instead of christening an eatery for an honored grandmother or treasured daughter whose name is “Porn,” it’s less offensive (or funny) to name a restaurant something like “Thai Tanic,” “Thairanosaurus” or “Thai and Stop Me.” Instead of naming a restaurant for a beloved son named Poo, wouldn’t it be more inviting to name a restaurant something like “Eye of the Thai-ger” or “Beau Thai?”

Indulge me for one more paragraph of pithy covfefes. Song titles and lyrics in particular seem to lend themselves to clever wordplay using Thai names. From the Beatles, you’ve got “All You Need is Larb” and “Can’t Buy Me Larb.” Who can every forget Andy Williams’ immortal “Thai to Remember?” Or Frankie Valli and the Four Seasons singing “Big Girls Don’t Thai?” Then there’s Hank Williams “I’m So Lonesome I could Thai.” How about The Temptations “Curry Tomorrow?” Okay, by now you’re probably thinking “that (Thai word for chili) is probably going to hell for his politically incorrectness.” What’s the point anyway?

My point is Thai restaurant in the Duke City tend to have rather boring and straight-forward names: Thai Curry, Thai Heritage, Thai, Orchid Thai, Pad Thai, Thai Kitchen, Thai Tip. Zzz! The most cleverly named Thai restaurant in town is probably “Hot Pink Thai” and even that’s pretty parochial. Give me a “Thai Me Up,” “Been There, Thai’d That” or “Tongue Thai’d” anytime. My friend Schuyler is no doubt paraphrasing a Winston cigarette commercial of the 1970s, “what do you want good punnery or good taste?” My retort is why can’t we have both?

Upon learning of a new Thai restaurant launching at Village @ La Orilla, we dared hope a clever pun would grace its marquee. Alas, the name “Thai Boran” may as well be “Thai Boring” to the punsters among us. At least I had to look up “Boran” to learn it translates from Thai to “old, ancient or historic.” Thai Boran is owned by restaurant impresario Kathy Punya, a native of Thailand who’s amassed quite a portfolio of restaurants across the Duke City, among them five Sushi Kings, Crazy Fish, Noodle King and Asian Street Food. It’s located next door to Albuquerque’s first cinema eatery, the not-so-cleverly-named Flix.

Thai Boran is somewhat on the small side and contrary to any notion of “Thai Boring” I may have had, it’s got a very exciting menu featuring some items heretofore unavailable in the Duke City. Among the eight uncommon to Albuquerque appetizers are Mee Krob, Sheldon Cooper’s favorite Thai dish and Thai toast. There are six salads on the menu along with five soups. Five one-of-a-kind specialty dishes adorn the Chef’s Collection section of the menu. These include a Thai Boran Beef Steak, grilled and sliced marinated beef steak served with a spicy tomato sauce. Other sections of the menu are dedicated to curry, rice, pan-fried noodles, noodle soups and entrees. All total there are 53 items on the menu.

7 July 2018: Sometime around 2010, toast become the latest artisanal food craze. Yes, toast, the most popular of which is probably avocado toast (available at Cafe Bella in Rio Rancho). The Washington Post believes in fact that “avocado toast has come to define what makes food trends this decade: It’s healthy and yet ever-so-slightly indulgent.” Thai Toast may be Thailand’s answer to avocado toast, all indications being it’s a relatively new dish. It’s certainly not a dish you find in other Thai restaurants across the Duke City. Four small slices sans crust of egg-dipped white bread topped with ground pork, green onions, then deep fried are served with a cucumber salad. At the very least, it’s a very interesting dish–not as good as other Thai appetizers, but good enough to try more than once.

5 April 2018: Another interesting appetizer whose name (with a little imagination and thought) will make the sophomoric among us giggle is Ka Thong Tong (crispy golden cups filled with ground chicken, mint, shrimp, peas, carrots and corn) served with cucumber salad. If it’s offered at any other Thai restaurant in town, neither my friend Bill Resnik nor I could recall having seen it. There are elements to this starter that seem to bespeak of other than Thai influences. First, the pastry cups are vaguely reminiscent of layered phyllo Greek pastries though not quite as flaky. The other influence was American with the trio of peas, carrots and corn, a combination neither of us had seen on Thai food. Sadly, the accompanying cucumber salad was too cloying to add to the golden cups which we both thought needed a bit more flavor push.

5 April 2018: My friend Bill is much more averse to the melding of sweet and savory flavors than I am so it was a surprise to me that he suggested mee krob as our second appetizer. Aside from being Sheldon Cooper’s favorite Thai dish, mee krob is a dish often made as sweet as some breakfast cereals. “It’s all about texture,” he reminded me about mee krob. Indeed, mee krob which translates from Thai to “crispy noodles” are deep-fried rice noodles that crisp and puff up when fried. They are then tossed with a sweet-and-sour-flavored stir-fry. Alas, the emphasis on Thai Boran’s was more sweet than sour. The stir-fry included chicken, shrimp and bean sprouts. Texturally the noodles are reminiscent of Quaker’s Puffed Rice cereal. Despite being almost as sweet as Puffed Rice, this is a fun (but messy) dish to eat.

7 July 2017: The curry section of the menu includes three curry dishes not all that common in Albuquerque: eggplant curry, pineapple curry and duck curry. Duck curry (red curry, cherry tomato, grapes, bell pepper, basil, and coconut milk) has been among my very favorite curry dishes since first enjoying it at the transformative Lotus of Siam in Las Vegas, Nevada. Thai Boran’s version is quite good showcasing tender slices of slow-cooked duck breast with enough fat for rich, unctuous flavor. The combination of acidic cherry tomatoes and sweet grapes is especially intriguing, but what brings it all together is a rich red curry prepared at Thai hot (not for the faint of heart). This dish is served with your choice of steamed Jasmine rice or brown rice.

5 April 2018: Mea culpa, mea culpa, mea maxima culpa. Though it’s always been my practice to avoid seafood mixed with elements that detract from its natural briny sweetness, I ordered Thai Boran’s seafood curry special at the “New Mexico hot” level. Heat levels tend to vary from one Thai restaurant to another. “New Mexico hot” can be either incendiary and tongue-scorching or rather on the mellow side. Thai Boran’s New Mexico hot is about as piquant as a bell pepper, rendering the red curry too sweet for my tastes. That’s a shame because the netful of seafood (New Zealand green-lip mussels, catfish, shrimp and squid) swam beautifully in the curry. The seafood was perfectly sweet and succulent, but the sugary-sweet curry just didn’t cut it for me. Next time it’ll be Thai hot.

There aren’t many Thai restaurants in Albuquerque’s burgeoning west side. Thai Boran is within a mile or so of Thai Cuisine, a long-time favorite. Boring names not withstanding, both are good options for Thai cuisine.