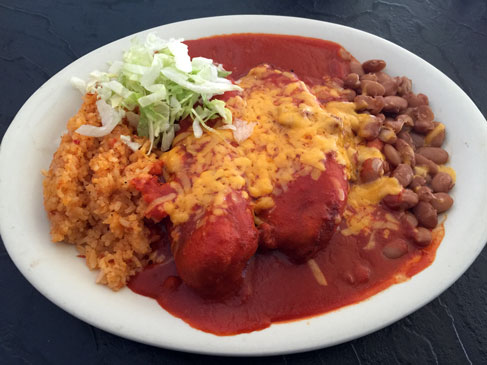 Uttered in a 1980s commercial for Pace Picante sauce, those lines expressed the ire of several hungry cowboys who threatened to string up the cook for serving a “foreign” salsa (translation: not made in Texas). That commercial also brings to my mind the annual issue in which–from 1999 through 2005–Hispanic magazine named its top 50 Hispanic restaurants across America.

The sentiment so eloquently expressed by those ravenous cowpokes reflects just how many New Mexicans feel when Hispanic magazine listed among its top 50, only two or three New Mexico restaurants per year. It really rankled us when both Texas and California had four times as many selections. Just as you won’t find too many cowboys who appreciate salsa made in New York City, you won’t find many New Mexicans who will freely admit that Texas, much less California, can have edible Hispanic food. Hispanic magazine further lost any credibility among New Mexicans when that top 50 list included restaurants in, heaven help us, Georgia or Mississippi.

Hispanic magazine did have a lot of credibility among the Albuquerque dining crowd when, for three consecutive years (2002-2004), it named Padilla’s Mexican Kitchen among its elite fifty. For nearly three decades, Padilla’s has been the anchor tenant of a small shopping strip which appears to be doing a booming business–at least around meal time. If you arrive for lunch only a couple minutes past eleven, you may have to park on a side street somewhere because neighboring businesses have a strict prohibition against Padilla’s customers parking in front of their stores.

Arrive ten minutes past eleven and you’ll probably queue up behind a line of hungry patrons, most of whom are employees of neighboring businesses lingering outside the restaurant’s door until it opens promptly on the hour. Even though Padilla’s serves its guests promptly, you don’t want to spend half your lunch hour hoofing it to your parking spot a few blocks away.

For what it’s worth, most of Padilla’s patrons seem to be locals who know the difference between real New Mexican food and the kind that might be served in New York City. New Mexicans of several generations have made this restaurant one of the most popular dining establishments in the city. Unfortunately, it’s not one of the largest restaurants in town despite two dining rooms. If you’re seated in the front dining room, you might feel a little cramped as the line of diners queues up behind you and all eyes are seemingly on the deliciousness on your table.

Padilla’s is sparsely decorated. Several Southwestern landscapes festoon the walls. That’s to be expected in New Mexico. Out of the ordinary, however, are a number of elephant pictures and figurines throughout the restaurant. It turns out the owner, Mary Padilla likes elephants (Padilla’s pachyderms?) and knows that elephants facing east with their trunks raised bring good luck. It’s certainly been more than good luck that has made Padilla’s such a success story because it’s certainly not its business hours. The restaurant is open only Monday through Friday from 11AM to 7:45PM. Patron loyalty is so strong that you’ll swear the same crowd which queued up before lunch returns to their place in line for dinner, and in some cases, they do.

The sense of triumph at finally being seated is akin to having won a small jackpot–the longer your wait in line, the more exhilarating your triumph. Once you are seated, a small bowl of salsa and some of the largest toasted tortilla chips you’ll find anywhere are quickly dispatched to your table. The chips are unfailingly crisp and have a pronounced corn taste. The salsa is like a nearly pureed like tomato sauce with flavorful, piquant ingredients. It doesn’t quite run off your chips, but it’s also not the thickest salsa in town. At about medium heat, it’s also not among the hottest salsas around, but it’s much better than the aforementioned Pace Picante Sauce.

Padilla’s menu includes a la carte guacamole salad and a guacamole tostada only in season (other restaurants don’t seem to realize that fresh avocado is a seasonal item). Despite the name on the marquee–Padilla’s Mexican Kitchen–the food is definitely New Mexican through and through. All dinner plates are served with beans, rice and two sopaipillas. The daily special on Monday, Tuesday and Wednesday showcases the restaurant’s outstanding carne adovada: carne adovada dinner (Monday), carne adovada burrito (Tuesday) and carne adovada dinner (Wednesday). The Thursday special is carnitas, papas and quelites (canned spinach at Padillas), a treat not that many New Mexican restaurants dare to serve.

18 April 2007: A la carte orders (which you can upgrade to dinners for a pittance more) include a variety of burritos and stuffed sopaipillas. The stuffed sopaipillas are among the very best in town. That’s because they start with a base constructed of some of the most wonderful sopaipillas you’ll ever have. The sopaipillas are fabulous! They’re light and pillowy forming a perfect pocket in which to insert honey or meat and beans. It’s certainly worth upgrading from a la carte just so you can have two of these honey colored treasures. One of the a la carte items you should order is the restaurant’s tacos, made with crispy tortilla shells stuffed with seasoned ground beef, cheese, lettuce and salsa. One taco will be gone in six or seven glorious bites so you might be tempted to order two instead.

18 April 2007: Padilla’s enchiladas are also quite good and served with chicken, beef or cheese. Among the most popular are the blue corn enchiladas (pictured above) which are even better than the standard yellow corn tortilla enchiladas. When your server takes your order, you’ll be asked whether or not you want onions on your entree, a courtesy you don’t see elsewhere. You’ll want a fried egg atop your enchiladas and though you can have them stuffed with cheese, chicken and ground beef are also available.

12 February 2015: Tamales. They’re not just for Christmas any more. Not that in New Mexico, they ever were. In the Land of Enchantment, tamales are an everyday treat, something locals enjoy for breakfast, lunch and dinner. Padilla’s tamales are superb! The cornmeal masa is redolent with the sweet flavor of finely ground corn kernels. The masa isn’t overly thick, presenting a nice balance and contrast of flavors with the tender tendrils of pork. Then there’s the chile. It’s a rich red blend with a pleasant piquancy and there’s enough of it to enjoy with your beans and rice, too.

29 April 2015: While the premise of the chile relleno seems fairly standard–a battered New Mexico green chile stuffed with cheese and topped with red or green chile–there are virtually restaurant-to-restaurant differences in how they’re made. Padilla’s chiles rellenos, for example, are a world of difference from those served at Teofilo’s in Los Lunas some twenty miles away. At Padillas, the chiles are very lightly battered, rendering the chiles somewhat flaccid and a challenge to cut with a fork. Once you cut into them, you’ll be rewarded with a molten white Cheddar which complements the shredded yellow Cheddar sprinkled atop the chiles. It’s a good chile relleno, albeit not a memorable one.

Despite my whiny sniping at Hispanic magazine, I admire the gumption it takes to create a list that’s bound to stir up controversy. The magazine takes special care to recognize restaurants which have carved out a niche in a competitive market in the way outstanding restaurants do–with delicious food and good service that build a loyal clientele. Padilla’s has certainly done that.

Padilla’s has established itself as an Albuquerque institution, one of the city’s very best New Mexican restaurants. Credit that to tremendous fan loyalty–not only to the restaurant, but to Mary Padilla and her family, many of whom work in the restaurant. Despite lines snaking out the door just prior to opening time, no one really wants Padilla’s to expand into larger quarters. Expansion sometimes takes away the charm and personality that makes some restaurants locally beloved and Padilla’s is certainly one very loved restaurant.