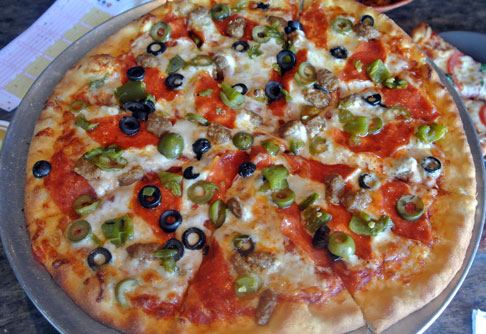 If you’ve ever wondered why the term “pink elephants” has long been recognized as a euphemism for a drunken hallucination, credit author Jack London. In his autobiographical tome, he described himself as “the man whom we all know, stupid, unimaginative, whose brain is bitten numbly by numb maggots; who walks generously with wide-spread, tentative legs, falls frequently in the gutter, and who sees, in the extremity of his ecstasy, blue mice and pink elephants.”

When we first heard of the Blue Grasshopper Brew Pub in Rio Rancho, we wondered if it, too, was a euphemism for adult beverage overindulgence. Frankly, the reason behind the name is almost as good as Jack London’s euphemism. The sobriquet was bestowed upon co-owner Peter Apers by his mentor as he was teaching Apers to play the blues on guitar. One of that mentor’s favorite television personalities was Caine, the David Carradine character in Kung Fu whom the Shaolin master called “grasshopper.” Hence “Blues Grasshopper.”

In 2014, Livability.com named the Duke City as “America’s best mid-sized city in the country for beer.” With nearly thirty brewery and tap room restaurants (as of this writing), Albuquerque metropolitan area cerevisaphiles certainly have their pick as to where to imbibe their favorite beer. Initially the Blue Grasshopper served beers from other local breweries, but with the advent of a new year (2015), they now have their own beer on tap.

So besides its name, what distinguishes the Blue Grasshopper from all the competition? Two things come to mind immediately. The first is the nightly live entertainment showcasing the best in local talent in several genres: pop, rock, jazz, country and more. The second is pizza, nine twelve-inch pies prepared in a wood-fired oven imported from Italy. There isn’t much else on the menu and what there is might best be described as “bar snacks.”

As long as there have been bars, pubs, taverns, bodegas and beer halls, there have been bar snacks, the type of which are served at the Blue Grasshopper. Salty and flavorful, these bar snacks are intended to make you want more adult beverages. A bowl of these bar snacks features pretzel sticks, hard and dry pumpernickel and rye bread pieces; and cheesy, salty and garlicky bite-sized pieces of goodness that will tide you over until your pizza is out of the oven.

Although you can choose all the ingredients with which to build your own pizza, the nine pies on the menu will sate most of us. Pies range from the simple (cheese pizza with tomato sauce and mozzarella) to the gourmet (chicken pesto with pesto sauce, artichoke hearts, sun-dried tomatoes, mozzarella and chicken). Hatch green chile can be added to any of them. All pizzas are made-to-order.

If you want the pizza that started it all, you’ll order the Blue Grasshopper’s version of the Margherita (tomato sauce, garlic, fresh basil, mozzarella, Parmigiano-Reggiano cheese, sliced fresh tomato). It’s a pretty basic pizza which would be improved with even more fresh basil. The crust has a light char and is is chewy, but formidable enough to hold up against the weight of copious ingredients. The combination of tomato sauce and fresh, sliced tomatoes is a nice touch as is the cheese blend.

Copious ingredients is what you’ll find on Greg’s Special, a pie topped with pepperoni, spicy Italian sausage, black olives, green olives, Hatch green chile, tomato sauce and mozzarella. What a pleasant surprise to enjoy both black and green olives with all their similarities and dissimilar flavor properties. The Hatch green chile has a nice roasted flavor and just enough piquancy to be discernible. The olives, green chile and tomato sauce are all acidic with only the mozzarella and crust to temper those properties. Still, it’s an excellent pizza.

Launched in October, 2014, the Blue Grasshopper occupies the space which previously housed a Quizno’s Sandwich Restaurant. No vestiges of the previous tenant remain in the formerly narrow and long retail strip center space which has been expanded to 2,000 square-feet with a seating capacity of 60 or so. Long gone are the sandwich assembly stations and bread ovens. In their place is a single pizza oven imported from Italy. It’s a pizza oven from which emerge pizzas cerevisaphiles and pizza aficionados will enjoy.