Skip to content
Closed in 2016 German Gone But Not Forgotten 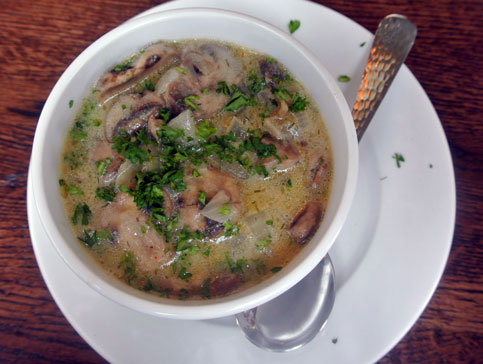 “We’re not normal people. We’re the Griswolds.” Laughs abound in National Lampoon’s European Vacation, the 1985 movie which follows the antics of well-meaning blunderer Clark W. Griswold and his equally inept family. In a television game show called “Pig In a Polk,” the Griswold family accidentally wins a trip to Europe where they leave a trail of destruction everywhere they go (who can forget when Clark knocked down Stonehenge by accidentally backing into it with a rented car?).

The family foray into Germany was no less fraught with hapless humor. In a German village, the Griswolds burst in on “Fritz and Helga”, a bewildered elderly couple whom they mistakenly believe are long-lost relatives. Though language barrier issues prevent any mutual dialogue, the Griswolds never quite seem to grasp that all conversations are one-sided and avail themselves of all the hospitality–including large bowls of sausage and sauerkraut with plenty of German rye bread–befitting family ties.

Like Clark W. Griswold (who’s intensely proud, but blissfully ignorant of his Germanic heritage), many New Mexicans haven’t cut through the sauerkraut and remain unaware of the diversity and deliciousness of German cuisine. Ask your friends and colleagues what dishes comprise German cuisine and they’ll probably answer “sausages, sauerkraut, potatoes and rye bread.” These stereotypes have long been reenforced by movies such as European Vacation and television comedies such as Hogan’s Heroes. In fact, Hogan’s Heroes was probably responsible for many of my generation being afraid to try German food, especially the dreaded sauerbraten.

In the world’s culinary stage, the cuisine of Germany may not be as recognizable or popular as the cuisine of its neighbors France and Italy, but compared to the cuisine of Eastern Europe (Poland, Hungary), it’s made significant inroads, even in New Mexico. For nearly two decades, Duke City diners were graced by the wit, beauty and culinary talents of Dagmar Schulze Mondgragon who served wonderful German food at her eponymous restaurant. A Polish restaurant in the northeast heights was short-lived in the 1980s and to my knowledge, the cuisine of Hungary hasn’t been featured at any restaurant in Albuquerque.

Shortly after health issues forced Dagmar to bid a fond auf Wiedersehen to the Albuquerque restaurant scene, (but sadly not in time for Oktoberfest) the Heimat House and Beer Garden opened its doors on October 25, 2014. Located at the familiar location which previously housed Liquid Assets, the Independence Grill, Los Compadres and a number of other restaurants, the Heimat House bills itself as a “modern German restaurant” which will also feature a number of Polish and Hungarian dishes.

The Heimat House inherited the dark, masculine woods look and feel of an authentic Teutonic tavern from previous tenants, but it won’t be mistaken for any of them. A curio cabinet near the entrance displays German collectibles such as Hummel figurines, Christmas nutcrackers, and beer steins. The beer garden incorporates elements of an outdoor patio, indoor atrium and the interior bar. The restaurant’s sound system pipes in not only the familiar bassy oompah and accordion beat of German music, but other music designed to put you into a festive mood.

Perhaps the best descriptor of German, Polish and Hungarian food is “comforting” as in stick-to-your-ribs comfort foods (CNN Travel named Germany’s deep-fried potato pancake as one of the world’s ten greatest comfort foods). For my friend Bob of the Village People (BOTVOLR), the comfort food properties of Polish and German food in particular evoke memories of enjoying these foods in his youth. Bob visited Heimat House shortly after it opened, knowing that there would be “start-up” issues, the type of which all new restaurants seem to experience during the “feeling their way around” period. Bob’s descriptions of his meal were so enticing that we visited two days later.

Predictably, our inaugural visit was fraught with kinks to be worked out. None of those kinks detracted from what turned out to be a very satisfying, very pleasant dining experience, one we’ll want to revisit soon. Because neither potato pancakes or pierogies were available, it gave us the opportunity to try other dishes we might not otherwise have ordered. The most grievous faux pas was not serving a great German rye bread or perhaps a broetchen, but this, too, was forgivable because plans were in place to correct this gaffe. By our second visit, Heimat House’s baker, who was already preparing the restaurant’s decadent desserts, began baking breads using dough from Albuquerque’s Swiss Alps Bakery. The light rye is served with a sweet honey butter an is quite good at sopping up some of the restaurant’s terrific sauces.

21 February 2015: German philosopher Friedrich Nietzsche once postulated that “a diet that consists predominantly of potatoes leads to the use of liquor.” If those potatoes are used in the creation of some Eastern European favorites, I might be inclined to agree with the existentialist giant. We found the Polish pierogies (stuffed potatoes and cheese) at Heimat rather boring and tasteless. Served with onions fried to a pearlescent sheen and a dollop of sour cream, they paled in comparison with the delicious pierogies at the Red Rock Deli. The German potato pancakes with applesauce made the pierogies seem exciting in comparison. With most of my favorite foods redolent with bold, assertive flavors, it stands to reason that the pierogies and potato pancakes would seem boring to me. Your experience might differ.

21 February 2015: As boring as we found the pierogies and the potato pancake, we were thrilled with the Hungarian spicy sausage soup, an invigorating soup redolent with fiery red paprika, the national spice of Hungary. Imbued with the characteristic rusty red color and smoky aroma of many Hungarian soups, the soup showcases a sausage that is indeed spicy though not necessarily piquant. It’s sliced link sausage, not sausage resembling fried ground beef. The soup also includes potatoes and onions. This richly fragrant and deeply flavored soup is especially good on a cold winter day, but will satisfy anytime, anywhere.

1 November 2014: Satirist H. L. Mencken once noted that “there are more different sausages in Germany than there are breakfast foods in America, and if there is a bad one among them then I have never heard of it.” Stereotypes be damned, when you visit Heimat House, you’ve got to try the sausage which is procured from the Duke City’s Alpine Sausage Kitchen. The Wurst Plate is a terrific appetizer featuring two types of sausage served with a mound of sauerkraut. Neither of the finely blended sausages are especially spicy, but a small dab of German mustard will give you all the punch you need. The sauerkraut doesn’t have the lip-pursing tang some ascribe to German sauerkraut, but it’s not bad.

1 November 2014: Four different soups, including an intriguing Dill Pickle Soup which BOTVOLR enjoyed, adorn the menu. The Hungarian Mushroom Soup is the type of soul-warming, deeply satisfying, robust and creamy soup that cures all ills. It’s brimming with woodsy mushrooms and translucent white onions in a rich, buttery mushroom stock. The sliced mushroom are deliciously meaty and earthy; they’re clearly the starring attraction of a very good soup. If your experiences with mushroom soups are associated with Campbell’s labels, you owe it to yourself to try the real thing.

1 November 2014: During their holiday season visit to Los Angeles in 2013, my friends über podcaster–bloggers Hannah and Edward considered the currywurst the best meal they had in the City of Angels. Currywurst is a Germany meets India meets America dish which has exploded onto the European culinary scene where it’s especially popular as a street food option. In recent years, currywurst has even begun to ensnare even American affections. What’s not to love? The three essential elements of the currywurst create an addictive flavor when combined. Germany’s contribution is the wurst (sausage). The curry is Indian and the tomato ketchup is an American invention. It’s the ketchup and curry powder combination that gives this entree a rich, spicy flavor and perhaps has a nostalgic effect on diners (hot dogs with ketchup anyone?). The currywurst is served with cubed French fries which you’ll lovingly dip into that delicious curry ketchup.

1 November 2014: Konigsberger Klopse, an alliterative Prussian entree that resonates with rich flavor is yet another comfort food entree you’ll appreciate more as the seasons transition to colder climates. Essentially meatballs (or meat dumplings) in a sour cream sauce, this dish has a flavor profile quite unlike Swedish meatballs. The meatballs inherit a salty intensity from capers and (perhaps) anchovies (as called for in many traditional recipes). The sour cream sauce lends a creamy, rich tartness. At Heimat House, this dish is served with German noodles and a cucumber salad. The cucumber salad is impregnated with dill and sour cream. For an interesting contrast, order the beet salad, too. The beet salad has a sweet-and-sour quality courtesy of the light tartness it gleans from vinegar.

21 February 2015: My very first memories of Stroganoff stem from having prepared a reconstituted version as a Boy Scout some thirty plus years ago. No one else in Troop 512 would even sample this “sophisticated” (albeit packaged and dehydrated) dish, which as it turns out, was a good thing for me. Alas, my love for stroganoff has, until rather recently, been unrequited. It just hasn’t been available at very many Albuquerque restaurants. The Heimat House not only serves Stroganoff, it serves a magical version of a dish that looks and tastes like a stew, but with gourmet elements. Packed with rich, tender beef and deep, stick-to-your-ribs flavors with “cooked all day long” properties, it’s the essence of comfort food especially on a chilly deep winter day. As with all great Stroganoff dishes, the noodles are perfect, the antithesis of al dente or mushy. The sauce balances creaminess and rich, browned flavors with addictively savory notes.

21 February 2015: Beef, it’s what’s for dinner! Sunday dinners, especially in the Midwest from where my Kim hails, are a veritable celebration of a German favorite: Bavarian Pot Roast. Now, Bavarian Pot Roast is one of those dishes critics and spoilsports will decry for its high-calorie, high (very) fat, high protein, low-carb properties, while proponents care only that it’s delicious and it’s filling. That’s the camp in which my Kim stands. The Heimat House version of pot roast could well have been lovingly made by a German mutter. It’s rich, tender and pulls apart easily. Prepared with a spice mix which includes ginger and nutmeg, it definitely resonates with Old World flavors and deliciousness. The Bavarian pot roast is served with aromatic German red cabbage and potatoes. Only the potatoes struck out with us.

1 November 2014: One of my very favorite German entrees is Rouladen, essentially a meat that has been rolled around a filling. It didn’t surprise us to see Roulade (which translates to roll) on the dessert menu. The Hungarian Raspberry Cream Roulade is a light and creamy slice of heaven served with housemade whipped cream. This is a very popular and very traditional Hungarian dessert favorite which Duke City diners will enjoy, too.

The Heimat House and Beer Garden celebrates all that is great about Germanic cuisine, a broad swath of deliciousness that frankly hasn’t received the respect and adulation it deserves. Here’s betting Duke City diners embrace the Heimat House and incorporate German cuisine into their rotation of favorites.