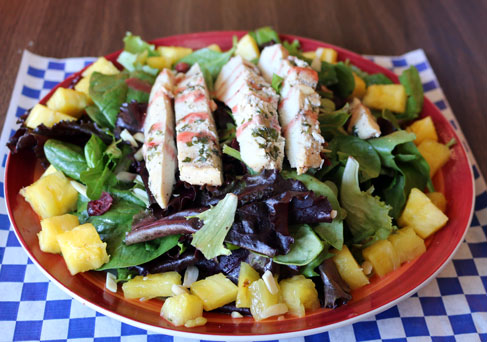 When you’re on one of the Caribbean islands, sometimes it’s hard to picture
how they fit in with the rest, but when you see them all joined together
like a necklace from space, you see the natural geographic connectedness of them all.
~Chris Hadfield

In virtually every sense, the Caribbean is a “melting pot.” It’s an amalgam, a hodgepodge, mishmash…a potpourri. It’s a gallimaufry, a confused jumble or medley of things. It’s a blend of African, Amerindian, European, East Indian, Arab and Chinese influences. Attitudinally, it’s festive and vibrant, bold and beautiful, fun and exciting. It inspires a joie de vivre. So does the diverse and delicious cuisine prepared throughout the island nations.

If you’re wondering how you may have missed out on such exciting culinary fare, chances are you haven’t. Every time you’ve visited one of Albuquerque’s Cuban restaurants, you’ve indulged in the cuisine of one of the many Caribbean’s island nations. You may have even visited the short-lived Jamaican restaurant that plied its wares on Central Avenue…and if you’ve ever visited the fabulous Talking Drums restaurant, you’ve experienced not only the most sumptuous African cuisine, but some of the very best food the Caribbean has to offer.

In recent years, the diversity of the island cuisine has been broached, though not featured exclusively, in such heralded eateries as the Guava Tree Cafe and Pasion Latin Fusion, both of whom were singled out by Woman’s Day Magazine for having “reenergized local palates.” The reception Duke City diners has given these Pan-Latin fusion eateries seems to indicate Albuquerque is ready for much more. We’re ready to embrace Caribbean cuisine in all its splendor.

In no way does that constitute my endorsement for the Bahama Breeze restaurant chain, an interloper now found in nearly forty cities across the fruited plain. Bahama Breeze claims to “bring you the feeling of a Caribbean escape, offering the food, drink and atmosphere you’d find in the islands.” While some members of the “chain gang” will enjoy the faux island ambiance and facsimile food, for the rest of us, er…let’s put it this way…Bahama Breeze is to Caribbean cuisine what the Outback Steakhouse is to Australian culinary fare.

With the January, 2015 launch of Café Caribe, adventurous Duke City diners need look no further than Fourth Street, just north of Central for an authentic Caribbean look and feel (not to mention taste and smell) that will transport you to the clear, azure waters of the Caribbean. Café Caribe specializes in the types of dishes you’d find in Puerto Rico, the Dominican Republic and Cuba. These dishes are all made with tradition and authenticity in mind.

At the helm is veteran chef Alejandro Arteaga whose previous restaurant stints were in Los Angeles and New York City. Over his two decades plus as a chef, Alejandro has cut a wide swath across various cuisines, ranging from Mexican to Italian, Argentinian to Spanish. He surmised that a menu of Cuban and other Latin-Caribbean specialties would go over big in Albuquerque which has a reputation as a pretty open-minded hub of culinary diversity.

You’ll know you’re getting close to Café Caribe well before you get there. Two telltale signs serve as precursors to your visit. One is the festive, up-tempo music emanating from the restaurant’s speakers. It’s feel-good music with a beat even the rhythmically-challenged among us will enjoy. Even more inviting than the music are the evocative aromas coming from the kitchen. They may affect you in much the way the tintinnabulation of bells affected Pavlov’s dogs.

By the time you espy the slogan “Grab it. Bite It. Love It,” below the restaurant’s marquee, the pangs of hunger will have struck. Savvy diners won’t even wait for the menu. As soon as your server approaches, order the empanadas trio. Now, if you’ve lived in New Mexico for a while, there’s a very good chance you’ve had an empanada or a thousand. New Mexican abuelitas have been proudly making and serving these “turnovers” for generations and they won’t concede that anyone can make an empanada as well as they can. With apologies to my own grandmothers, the empanadas at Cafe Caribe are pretty darned good.

The empanadas trio offers your choice of Chicken Sofrito, Beef Picadillo or Four Cheese. You’ll want to try at least one of each. You’ll also want to visit on Mondays between 4 and 6 because every Monday is “empanada night” and you can have as many one dollar empanadas as your heart desires. These gilded, crescent-shaped treasures are art on a plate, each addictively delicious. The chicken sofrito (the Spanish trinity of chopped onion, garlic and bell pepper) and the Beef Picadillo (a melange of ingredients) empanadas are stuffed deliciousness while the four cheese empanada exemplifies gooey, cheesy goodness. The trio is served with a pleasantly piquant sauce that enlivened the empanadas even further.

Cafe Caribe has the answer to any questions you might have about how to cool down on a balmy summer day. The answer, of course, is lemonade and not just any lemonade. Wash down your meal with an organic lemonade, limeade or mint lemonade. Better still, indulge in a fruit lemonade made with your choice of strawberry, guava, coconut, mango, mixed berries or passion fruit. The tropical fruit flavors seem a natural complement to the tangy lemonade.

Cafe Caribe’s salad menu lists four innovative and inviting salads. The golden pineapple chicken salad may be the most “tropical” of the lot, a beautifully plated arrangement of mixed mesclun (a salad mix of assorted small, young salad green leaves), pineapple, dried cranberries, toasted almonds and grilled chicken. There’s not much (if any) dressing on this salad which means the other ingredients had better be able to stand out on their own. They do–and very well. Texturally, the toasted almonds and dried cranberries provide a nice contrast to the crisp greens, juicy pineapple and perfectly grilled chicken all of which together create a very good flavor profile.

With all due respect to the salad and even the empanadas, we visited Cafe Caribe for the pernil asaldo or Caribbean roasted pork. The pernil is marinated in a myriad of Latin spices that imbue it with garlicky and citrus notes, a flavor profile made possible only through slow, meticulous preparation. The roasted pork more closely resembles the pulled pork of Southern barbecue than it does cochinita pibil, the luscious shredded pork dish prepared so wondrously at El Norteño. The shredded pork, served in a plentiful portion, is fluffy and moist, tempered with pickled red onions and served with a yellow rice.

Perhaps even better than the pernil asado (which is excellent) is the arroz con pollo, a chicken and rice dish made with saffron rice, shredded chicken, sofrito, peas and carrots. My Kim called it the best arroz con pollo she’s ever had while I’d be challenged to choose between Cafe Caribe’s version or the one served at Ajiaco Colombian Bistro. It’s amazing how moist and delicious a rice dish can be made (if only someone could teach New Mexicans how to make it). It’s so good you may want to finish it all in one serving, but so plentiful, you could have a second meal.

Just because peaches aren’t native to the Caribbean doesn’t mean enterprising chefs can’t incorporate them into delicious desserts. Appropriately, one of the best ice cream-based desserts anywhere in Albuquerque, is called the Peach Paradise. It’s easy to taste why. A large goblet is hard-pressed to contain the generous scoops of French vanilla ice cream with its characteristically richer and deeper flavor notes than regular ice cream along with whipped cream, a cherry sauce and sliced peach halves. It’s an excellent dessert with refreshing qualities and the superb flavors of fresh peaches and rich French vanilla.

As if you need any more reasons to visit, Cafe Caribe provides live music every Friday. They offer vegetarian dishes and gluten-free options every day. It’s a family-owned and operated restaurant with an experienced chef who aims to please.