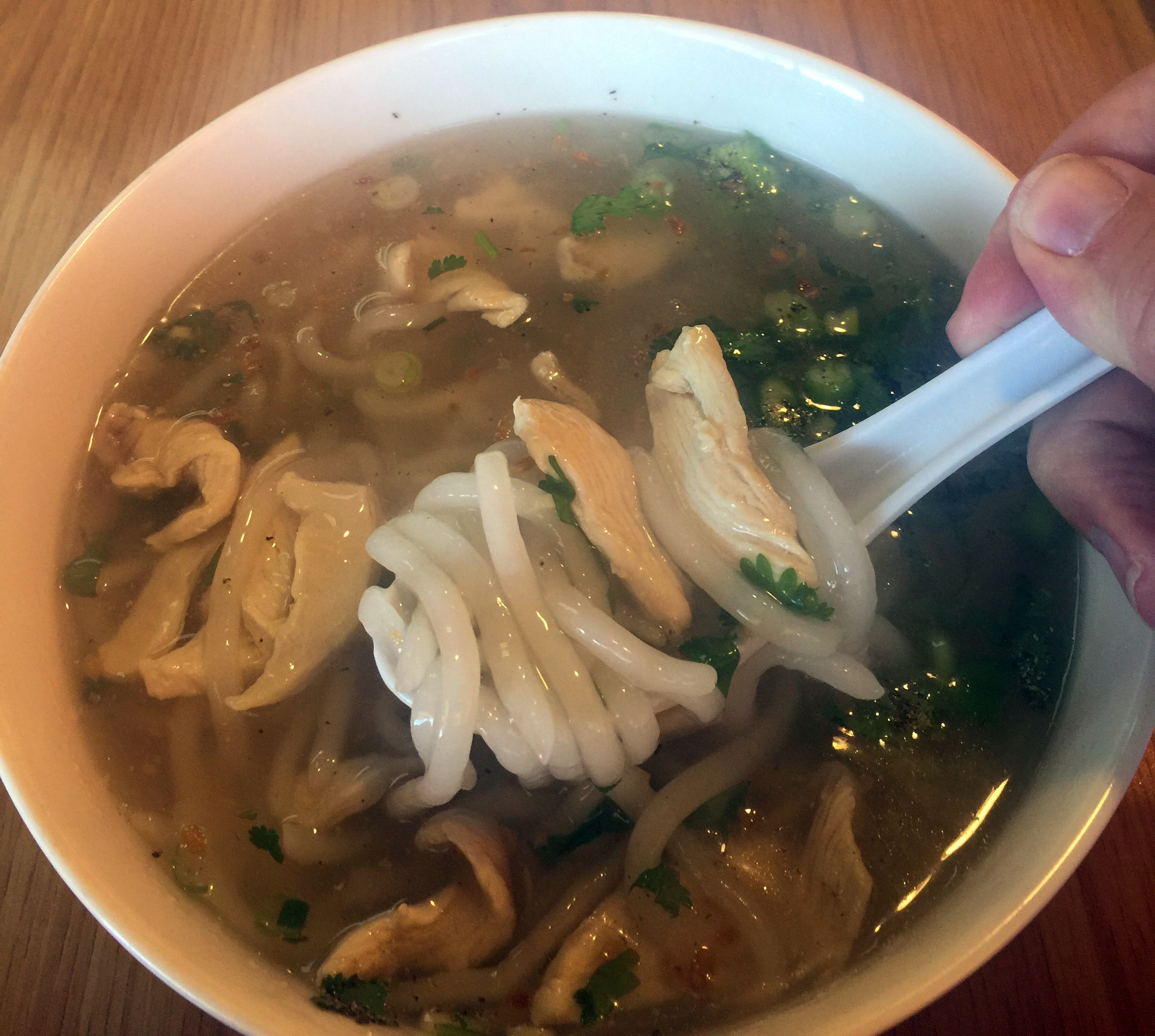 One definition of audacity is “the state of being bold or daring—particularly with disregard for danger, rudeness or pressure.” Audacity is nine-year-old fourth grader Akilan Sankaran (son of my friend Sridevi) unflinchingly spelling such words as “rejoneador” and “mnemonic” to win the New Mexico Spelling bee over eighth graders who’d participated in the annual event as many as six times. Audacity is a miniature dachshund protecting its family from the menacing mailman who dares trespass daily into the family’s territory. Audacity is Homer Simpson eating fugu, a blowfish which can be toxic if not properly sliced.

It may not be as bold or daring as the aforementioned examples, but your humble blogger recently demonstrated great audacity. When my friend and colleague Tuan Bui asked me to pick a restaurant where we could enjoy pho-nomenal pho, I didn’t take him to one of the Duke City’s tried and proven Vietnamese restaurants, but to a Lao restaurant which itself demonstrates audacity by calling itself “Pho Lao.” Having grown up in Vietnam and still partaking frequently of his mom’s very authentic Vietnamese food preparations, Tuan certainly knows more about pho than I ever will. My restaurant choice would either expose me as a phony (or pho-ny) or would validate my reputation as a virtuoso of Vietnamese victuals.

30 March 2017: What made my choice especially daring is that during my inaugural visit a few months earlier, I literally couldn’t immediately discern the nuances of the Lao Noodle Soup. That’s because my appetizer precedent was the most incendiary papaya salad I’ve ever had. It made me cough and sputter and drew a gusher of tears from my eyes, but it was so darned delicious it was impossible to stop eating it. My vaunted taste buds and tongue would recover I hoped. As with all Lao-style papaya salad, a large mortar and pestle is used to pound garlic and chilies together along with a very pungent fermented Lao fish sauce and fermented shrimp paste. With the addition of shredded green papaya, juicy tomato slices and lime juice, the papaya salad is replete with intense flavors: pungent, piquant, sour, sweet, salty and especially umami (from the fish sauce). Sharing the bowl with the papaya salad is a mound of shredded cabbage, not so much a palate cleanser but a balm for the burn.

Papaya salad, by the way, may be more closely associated with Thai cuisine, but its origin is Lao. The same thing goes for sticky rice and larb, two foods which have become ubiquitous in Thai restaurants. Bordered on the east by Vietnam and on the west by Thailand, Laos is a landlocked nation for which the Mekong River forms its border with Thailand. Unlike Thai cuisine, Lao food tends to be much lighter—no sweet and heavy curries or stews. Strong flavors—bitter, sour, spicy, salty and umami–are a hallmark of Lao cuisine with the blandness of sticky rice balancing out those strong flavors. Contrary to Thai cuisine, in Laos very little sugar is used in cooking with more dishes tending toward a bitter flavor profile.

So, why doesn’t Pho Lao showcase the foods of Laos? That was attempted before when the restaurant first launched and was known as the Mekong Noodle House. Albuquerque, it seems, didn’t give the Noodle House and its Lao-centric menu the type of reception it gives the phalanx of pho-bulous Vietnamese restaurants throughout the Duke City. Ergo, the name and concept change to Lao Pho. Ensconced in a timeworn strip mall just north of Peter Piper Pizza, Lao Pho has resembled a ghost town during my first two visits. It almost pained me to realize that so many Duke City diners were eating at entirely pho-getable restaurants when this paragon of deliciousness was virtually empty–despite a very favorable review from the Albuquerque Journal.

Pho, by the way, may have had its origin in Vietnam, but you’ll also find pho on menus throughout Laos, albeit pronounced “fer” and made with different spices and herbs flavoring the broth. As with its Vietnamese counterpart, Lao pho is served with sprouts, Thai basil, jalapeño, romaine, and fresh lime. In a heading entitled “Noodle Soups,” Pho Lao’s menu lists five phos, a Lao noodle soup, tom yum soup, tom kha soup and wonton ramen soup. The menu also lists six rice dishes, two of which showcase Lao beef jerky and Lao pork sausage (both of which you’ve got to try). Stir-fry dishes on the menu include the ever popular Pad Thai as well as chow mein and fried rice. Only three appetizers grace the menu–spring rolls, egg rolls and the aforementioned papaya salad.

30 March 2017: With my mouth still on fire from the combustible papaya salad, it took a while before my taste buds would be able to discern all the flavors of the Lao noodle soup, the one soup for which the noodles are made by hand. Fortunately this enchanting elixir arrives at your table scalding hot so it’s advisable to wait for it to cool. There are so many elements to this Lao variation of a chicken noodle soup you’ll absolutely love. The hand-made noodles about as thick as Italian bucatini and have a rich, almost buttery flavor. Texturally, the noodles are an absolute delight to slurp up. They have a very nice mouth feel. The chicken, a combination of white and dark eat, is in larger pieces than you’ll find in most chicken noodle soup and it’s plentiful. Most enjoyable is the broth with its intense poultry flavor punctuated by green onions and cilantro. This is one soup that may almost make having a cold something for which to look forward.

5 September 2017: At the recommendation of the amiable Pany, our hostess and chef, both Tuan and I ordered the Pho Lao Combo (rice noodles, sliced fresh beef, tripe, beef meatballs, well-done beef in beef broth topped with green onion, cilantro and fried garlic). If you’re of the carnivorous persuasion this is the soup to order. From both a flavor and textural perspective, it offers the most variety. As with Vietnamese pho, the broth announces itself on the way to your table with a fragrance so enticing your mouth may water in anticipation. That’s courtesy of a bone broth simmered slowly and enhanced with the spice combination of sugar, cinnamon, star anise, clove and cardamom–not as prevalent as with Vietnamese pho, but still there and oh, so delicious.

So, did my audacity pay off? Well, my friend Tuan was certainly blown away by Pho Lao though neither of us could finish our swimming pool-sized bowls of pho. He admitted Lao pho is as good as (if not better than) the pho served at all but a couple Duke City Vietnamese restaurants he’s tried. Being far less foolhardy than I, he finished less than half the insanely piquant papaya salad, saving the remainder for later. That meant he could taste his pho from the start not when the burn quelled. Indicative of the addictive properties of the potent papaya salad, he returns frequently to get his fix though admittedly he sometimes can’t eat more than three or four bitefuls at a time.

24 April 2019: Perhaps no dish better illustrates the not so nuanced differences among dishes served by neighboring countries than curry.  In Thailand, for example, curry tends to be rather sweet (almost cloying) and its piquancy is to taste.  In Laos, curry dishes are much more subtle, not nearly as sweet, pungent or piquant as their Thai counterparts.  Coconut milk is but a whispered hint on Lao curry and there’s virtually no heat on the green curry, traditionally the most piquant of all Thai curries.  If your tastes gravitate toward sweet, piquant curries, you probably won’t enjoy Pho Lao’s version.

Denizens of the Duke City should show some audacity of their own by visiting this excellent restaurant and enjoying some of the most sumptuous soups in town. Pho Lao is in the same rarefied air with the best Vietnamese and Thai restaurants in Albuquerque!