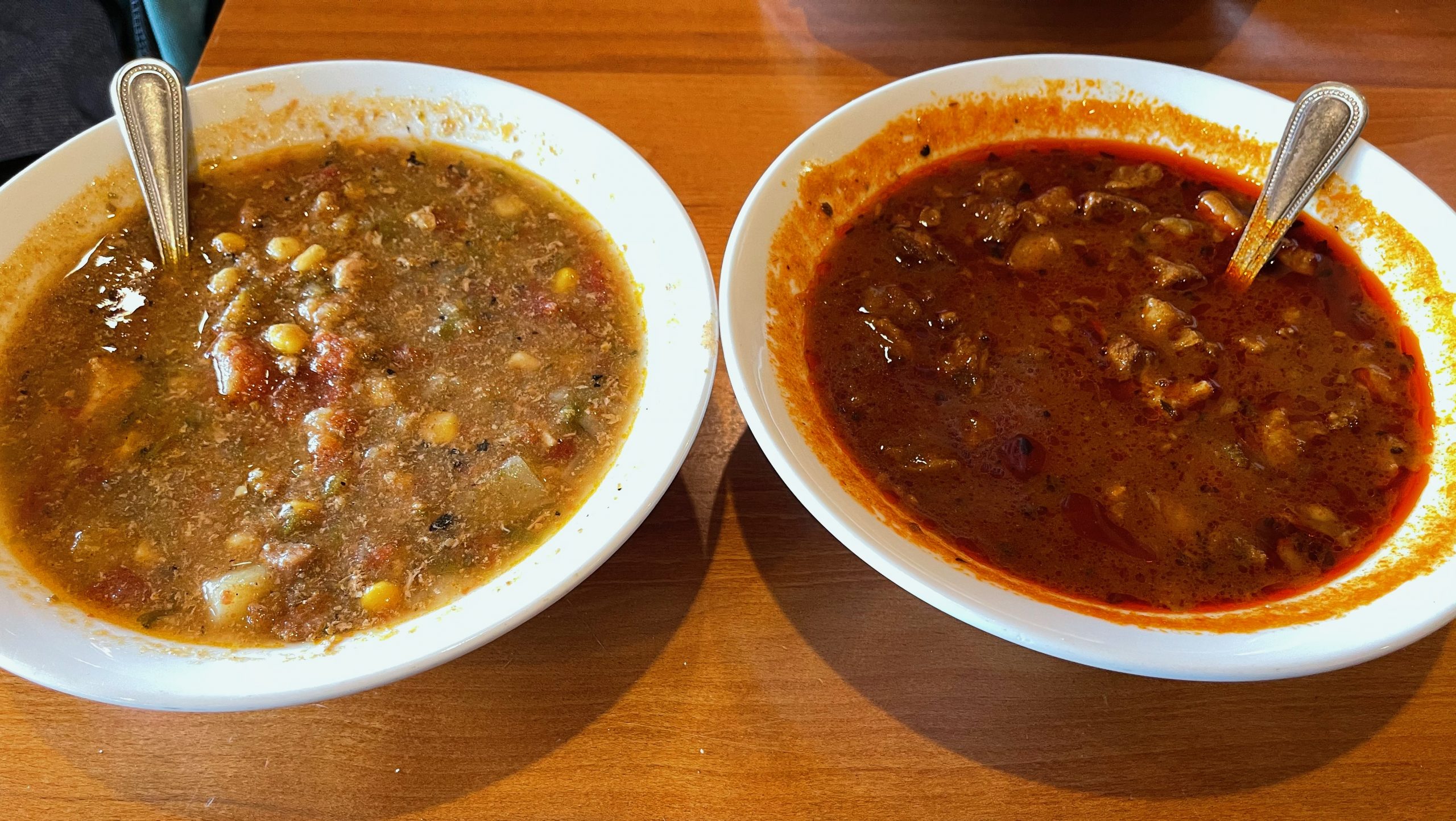 Pedro de Castaneda, a Spanish explorer who chronicled Coronado’s expeditions through the southwest from 1540 to 1542 observed that corn, beans, and squash were the main staples of the pueblo diet. Of the three, which have come to be known as “Three Sisters,” corn was the most important. It was boiled whole, toasted on the cob, or dried and ground into a fine powder easily cooked as bread or gruel.  Every day female family members knelt before metates (grinding stones), grinding corn to feed their gods, fetishes and kin. One crushed the maize, the next ground it and the third ground it even finer. Castaneda observed that the women worked joyfully at this task.  The three sisters of corn, beans and squash remain an integral part of the pueblo diet.

Think “pueblo harvest” and the first image the term evokes is likely of the classical “horn of plenty” motif depicting a bountiful cornucopia in which corn, beans and squash spill out of a goat’s horn.  This rich symbolism of pueblo life also represents the cuisine at the Indian Pueblo Kitchen (formerly known as Pueblo Harvest), a restaurant which celebrates the culinary traditions of New Mexico’s nineteen Indian pueblos and showcases the three sisters in various delicious dishes.   Among those culinary tradition are several shared with Spanish settlers.  New Mexico’s Native American Pueblos utilize red and green chile in their cooking as much as anyone in the Land of Enchantment.  Chile is a prominent ingredient on the Indian Pueblo Kitchen menu.

The Indian Pueblo Kitchen is housed within the sprawling Indian Pueblo Cultural Center.  The Indian Pueblo Cultural Center was launched in 1976 to highlight the historical and contemporary accomplishments of New Mexico’s pueblos from pre-Columbian time to the present. Its mission is “to preserve and perpetuate Pueblo culture and to advance understanding by presenting with dignity and respect, the accomplishments and evolving history of the Pueblo people of New Mexico.”  A prominent symbol throughout the Cultural Center as well as in the art of New Mexico’s pueblos is that of Avanu, the water serpent.  Avanu  represents both water and the prayer for life-giving waters which are so critical for life in the desert.

The Indian Pueblo Cultural Center’s focus is a 10,000 square foot museum visited by more than 200,000 people per year. A permanent exhibit highlights the creativity and adaptation which made possible the survival, diversity and achievements of each of the nineteen Pueblos. In addition to the on-site museum, the Center includes a children’s museum, gift shops, a smoke shop and the Indian Pueblo Kitchen. One of the most popular museum attraction is the several hornos, beehive-shaped outdoor adobe ovens in which breads…and more are baked.

Although we’d been in Albuquerque for nearly eight years, it took a recommendation from celebrity chef Bobby Flay to first shame us into first trying the Pueblo Harvest Cafe way back in 2002. Before he became a primadonna glitterati, Flay actually seemed  to spend more time in New Mexico than in his native New York.  He raved about the restaurant’s tamales in one of his many Food Network shows and he knows a bit about tamales, featuring them on the menu throughout his restaurant empire.

The Indian Pueblo Kitchen is tastefully decorated with the art of talented Pueblo artists. It is a large restaurant with comfortable accommodations for the copious visitors who frequent the Center.  A commodious patio offers sun-shielding shade and spectacular views of the Sandia Mountains to the East.  Because the restaurant doesn’t accept reservations, you’ll have to put your name on a waiting list and hope your wait isn’t especially long.  During our 2021 visit, the expected wait was nearly an hour long.

The menu is a showcase of the southwestern cuisine which resulted from a fusion of Native American, Spanish and Mexican ingredients and culinary traditions. It is a multi-page menu that features exciting and delicious dishes. Portions are as generous as the Pueblo peoples.  The menu offers an all-day brunch that includes a “kicked-up atole” (Blue corn, quinoa, amaranth, currants, piñon, sunflower seeds, pumpkin seeds, triple berries and buttery toasted Pueblo bread are married together in this meal, similar to a porridge).

As has become nearly de rigueur at contemporary restaurants, the menu also features a “small plates” section.  Small plates, in this case, is more akin to appetizers than it is to tapas.  Also on the menu are sections featuring salads, New Mexican favorites, burgers, contemporary indigenous meals, desserts, sides, beverages and take-home bakery goods.  It’s a very compelling menu with a number of intriguing items, several of which will warrant return trips.

There are four items available in the take-home baked goods section of the menu: famous Pueblo pies available in a variety of flavors (peach, cherry, prune and apple); fresh oven-baked Pueblo cookies available individually or by the dozen; authentic Pueblo oven bread loaves and house-made scones.  The Pueblo oven bread forms the foundation of excellent sandwiches and unbelievable French toast.  Even if you don’t take home an entire loaf (which you’ll be tempted to eat in one sitting), make sure you order a side of Pueblo oven bread.   Two slices of the most delicious staff of life are served with butter and grape jelly (sorry BOTVOLR, it’s not Welch’s).

Though we’re typically wary of ordering two bread-based items in one meal (pizza and breadsticks for example), there was no way we could resist ordering the localized honey tasting plate (mini fry bread pieces plated with a local honey selection and a favorite local chile jelly, just for a bit of kick). The “mini fry bread pieces” turned out to be so sopaipilla-like that you can’t call them anything else.  Puffy pillows of delicious fry bread from which steam wafts when you tear them open are as good as any sopaipilla you’ll ever have.  Local, raw honey from Moses and B’s are exemplars of natural, organic and absolutely mouth-watering honey.  It’s so much better than the “honey-flavored syrup” so many New Mexican restaurants serve with their sopaipillas.

Having grown up within the confines of the Picuris Pueblo Reservation in Taos County, my family frequented the various feast days held on the Pueblo.  My siblings and I found the dances mesmirizing, especially the dance of los matachines performed on Christmas Eve and Christmas Day.  This particular dance is Hispanic in origin, though it’s performed jointy by Native and Hispanic participants. Neither the distinctive fiddle and guitar music or the regalia are that of ancient Pueblo Indian tradition.

Back then many Picuris families would open up their homes and display the hospitality for which New Mexico’s Indian Pueblos are known.  Visitors would be feted with some of the most delicious food possible.  Maybe that’s why one menu item in particular caught my eye.  Fittingly that item is called “Pueblo Feast Day Experience” and it’s very reminiscent of the hospitality and generousity of my Picuris neighbors.  Here’s how the menu describes this menu item: “Dancers require sustenance in preparation for Pueblo Feast Day Celebrations, and three commonly served stews are Red Chile Beef Bone Posole, Feast Day Red Chile and Green Chile Pork.”  This “Experience” is offered with one, two or three stews and includes fry bread, house-made tortilla or Pueblo oven bread, Jeme enchiladas, Pueblo potato salad, Pueblo pie a la mode or bread pudding.

Not surprisingly, the Pueblo Feast Day Experience is more than most couples can handle even when having one or two stews instead of three.  Both of the stews we requested–green chile stew with pork and red chile stew with beef–were very satisfying, both offering a nice balance of piquancy and flavor.  Cumin isn’t used on any item on the menu.  With a circumference about the size of a Frisbee, the Indian fry bread is also large enough to share.  Sadly, it’s not served with the raw, natural honey offered with the tasting place, but with that annoying packaged honey that’s nearly impossible to open.

Jemez enchiladas were the one item we found surprising for a reason other than sheer size.  Described on the menu as “a delicious combination of a house-made flour tortilla layered with red chile, American cheese and diced onion.”   It was wholly unlike any enchiladas we’ve ever had, more closely resembling a red chile pizza.  That was reinforced quickly when we determined the easiest way to eat it was to pick it up like a slice of pizza.  Call it an enchilada or a pizza if you want, but you will find Jemez enchiladas delicious.

Prune pie has long been a standard among New Mexico’s northern pueblos. Go to any high school graduation, fiest day or wedding hosted by a Pueblo citizen and you’ll find prune pie among the dessert offerings. Most guests prefer it to the cloying, inch-thick frosted, store-bought cakes. There’s a good reason for that. Prune pie, whether heated or served cold, is delicious with nice pronouncements of sweet and tangy flavors.  The Indian Pueblo Kitchen’s version is somewhat thicker than what I recall enjoying in Picuris, but it’s very good.  So is the cherry pie.

Characteristic of New Mexico’s Pueblo peoples, the Indian Pueblo Kitchen will treat you like a welcome guest. Like the people it represents, this restaurant is a state treasure.