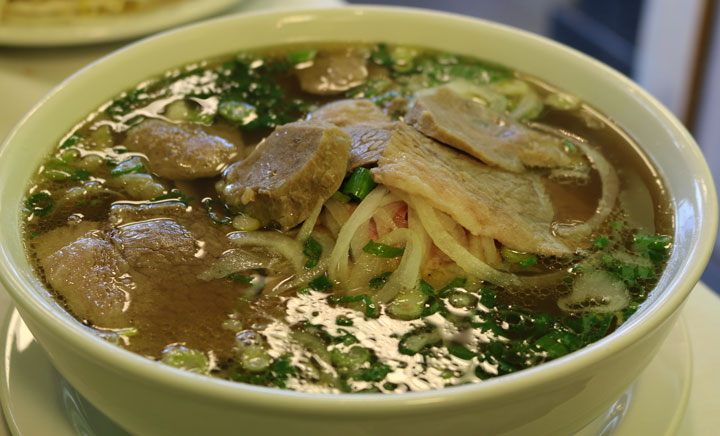 Beef.  How do I love thee? Let me count the ways. I love thee to the depth and breadth and height my pho spoon can reach. Okay, I’m no Elizabeth Barrett Browning, but if I were to count the ways I love beef, the count might stop at seven–as in the special seven courses of beef offered at Pho #1, yet another outstanding Vietnamese restaurant in the Duke City.

Launched in 2004, Pho #1 may well be on its way to earning its name. The seven courses of beef is one–make that seven–reasons why.  Other reasons include a stellar rendition of the name on the marquee; the restaurant’s pho has earned a reputation as among the city’s very best in a city that has embraced pho.

In a “Chow Down in Burque Town” forum entitled “Best Vietnamese Restaurant in Town” on the omnibus Duke City Fix, Albuquerque’s pho-fanatics weighed in on their favorites.  One of the most frequently mentioned was Pho #1.  Common reasons given were the large number of local Vietnamese families who eat there, the “to die for”soups and the genuinely nice family who owns and runs the restaurant.

With more than one-hundred items on the menu, not including the seven courses of beef, Pho #1 offers a veritable compendium of Vietnamese food favorites including a large selection of pho bo (beef noodle soup).  Pho is the classic Vietnamese fast food, served in a large soup bowl with fresh rice noodles topped with your choice of beef slices (rare steak, well-done flank, brisket, tendon, tripe, skirt flank and beef ball) then sprinkled with chopped green onion, cilantro leaves and sliced onion.  Each bowl is accompanied by a plate of bean sprouts, sliced jalapenos, lime and basil.

Pho #1 specializes in beef noodle soup, the menu referring to it as “the adventurer’s choice” because of the near limitless flavor combinations in which it is available.  A small bowl of pho is the size of a wading pool, a large bowl the size of a swimming pool.  For a pittance, you can even upsize to an “extra large” bowl which is virtually the size of a pond.  It’s common at Pho #1 to enjoy an asynchronous symphony of slurping, the audible inhalation of noodles being heartily enjoyed by entire families, each member partaking of a different size bowl of pho (similar to the A&W restaurant of old concept of Papa, Mama, Teen and Child burgers).

Pho is believed to have salubrious qualities, but as a cold and flu remedy, nature’s very best soup is chicken noodle soup.  A prominent pulmonary specialist at the UCLA School for Medicine and his team of researchers have concluded that chicken soup contains drug-like agents similar to those in modern cold medicines.  Healthful to be sure, but you can’t discount the sheer pleasure of the deliciousness of a good chicken noodle soup.  Pho #1’s rendition is among the very best in the city; it’s no wonder Pho #1 is such a popular dining destination during cold and flu season.

One of the more popular phos is the #38, the saté beef noodle soup which originates in the Mekong Delta in the extreme Southwest part of Vietnam.  Saté is a roasted chili paste made with garlic, shrimp paste, shallots and other sundry ingredients.  Saté imparts a heartiness and spiciness to the broth and a fragrance that titillates the olfactory senses.  Floating atop the broth are cucumber and tomato slices which are softened by the heat of the broth and impregnated with its rich flavors.  The noodles are thin rice noodles almost too long to wrap your fork around so you’ll be well practiced in the art of slurping by meal’s end.  This is an excellent pho.

Lest I leave you with the impression that sensational soups and the aforementioned seven courses of beef are Pho #1’s sole claim to excellence, fewer than a quarter of the more than one hundred items on the menu are soup.  The menu includes a nice selection of rice dishes served with Jasmine rice, vermicelli bowls and chicken and beef entrees as well as several chef’s specials.  One thing I’ve discovered about Vietnamese menus is that they don’t aptly describe the deliciousness of the item you order.  That’s best left to gourmet high-end restaurants whose colorful descriptions don’t always measure up.

The menu doesn’t so much describe each entree as it does name it.  For example, #78 on the menu is listed simply as “stir-fried soft or crispy egg noodles with beef, chicken or seafood.”  That’s hardly inspirational, but one bite and you will be inspired.  My Kim has a passion for crispy egg noodles which are reconstituted in a sweet and savory brown sauce and topped with vegetables.  She’s had this entree at every Vietnamese restaurant in town which offers it and considers Pho #1’s rendition the very best in Albuquerque.  I’m inclined to agree.  The flat egg noodles are delicious in both their crispy or reconstituted versions and the sauce is simply fabulous.  It’s more sweet than savory, but with a pronounced hint of garlic.  The vegetables are perfectly prepared, just beyond the al dente stage so that they have a fresh and crispy texture and flavor.

Several years ago, the Beef Council hired deep-voiced actor Robert Mitchum, a paragon of manliness, to voice over its commercials with its slogan “Beef: It’s What’s For Dinner.”  In Vietnam, seven courses of beef are what’s for wedding feasts.  Not so in Albuquerque where two Vietnamese restaurants–Pho #1 and Pho Linh–make seven a lucky number every day of the week by offering seven delicious courses of beef.

Before your first course is served, a bowl of uniquely wonderful fish sauce is brought to your table, but unlike the semi-clear fish sauce served elsewhere, Pho #1’s is a brackish brown with a pronounced peanut taste and includes julienne carrots, jicama and chile. It’s the fish sauce preferred by Asians (at heart) like me.

Next to your table is a large bowl of greens which includes jalapenos, mint, thinly sliced green apples, lettuce leaves, cucumbers and vermicelli noodles. A bowl of hot water and several spring roll wrappers accompanies the greens along with a “not yet” warning from the wait staff.

The first two courses you can actually consume are foreplay for your taste buds: grilled Hawaiian loaf leaf beef (pictured above) and grilled beef wrapped with pickle onion. Both have the consistency and look of sausage links but with unique taste combinations of sweet, spicy and slightly tart that will heighten your anticipation for the next courses.

The next two courses–fondue-style beef and sliced beef marinated in lemongrass and spices–are prepared at your table. A nimble fingered waitress will then teach you to craft spring rolls with the aforementioned greens, spring roll wrappers and the thinly sliced beef. You might never have better spring rolls and even if they fall apart on your hands, the residual aromas will linger pleasantly on your hands and on your olfactory memories.

The fifth course features razor thin slices of raw tenderloin and onion tossed with lime, crushed peanuts and basil. It may have been my favorite of the seven courses–even without drenching it in fish sauce–and is very similar to the beef Capriccio served at the incomparable Cyclo in Chandler, Arizona.

>The sixth course is a steamed beef paste/meatball mixed with glass noodle and spices. The glass noodle has the consistency and look of a white pork rind but with a far superior taste while the beef paste/meatball will blow you away. It’s not the most attractive looking beef you’ll ever see, but beyond its lack of esthetics, it is a fabulous beef mound.

The last course, beef congee, is reminiscent of a the New Mexican entree arroz con pollo (rice with chicken) both in taste and consistency. It is our least favorite of the seven courses, but was still a wonderful way to end a meal.  It’s especially warming in the winter or on a rainy day.

Naturally you’ll want to wash down a delicious meal at Pho #1 with one of the restaurant’s outstanding shakes: avocado, jackfruit, green bean (yes, that’s green bean), pineapple, strawberry and durian, my favorite.  Durian, the world’s stinkiest fruit somehow makes for an outstanding shake.

Albuquerque is blessed to have several outstanding Vietnamese restaurants.  It’s disputable which one really is number one in the hearts, minds and appetites of Duke City diners, but one thing’s for sure–trying to figure out which one reigns supreme is a delicious adventure.