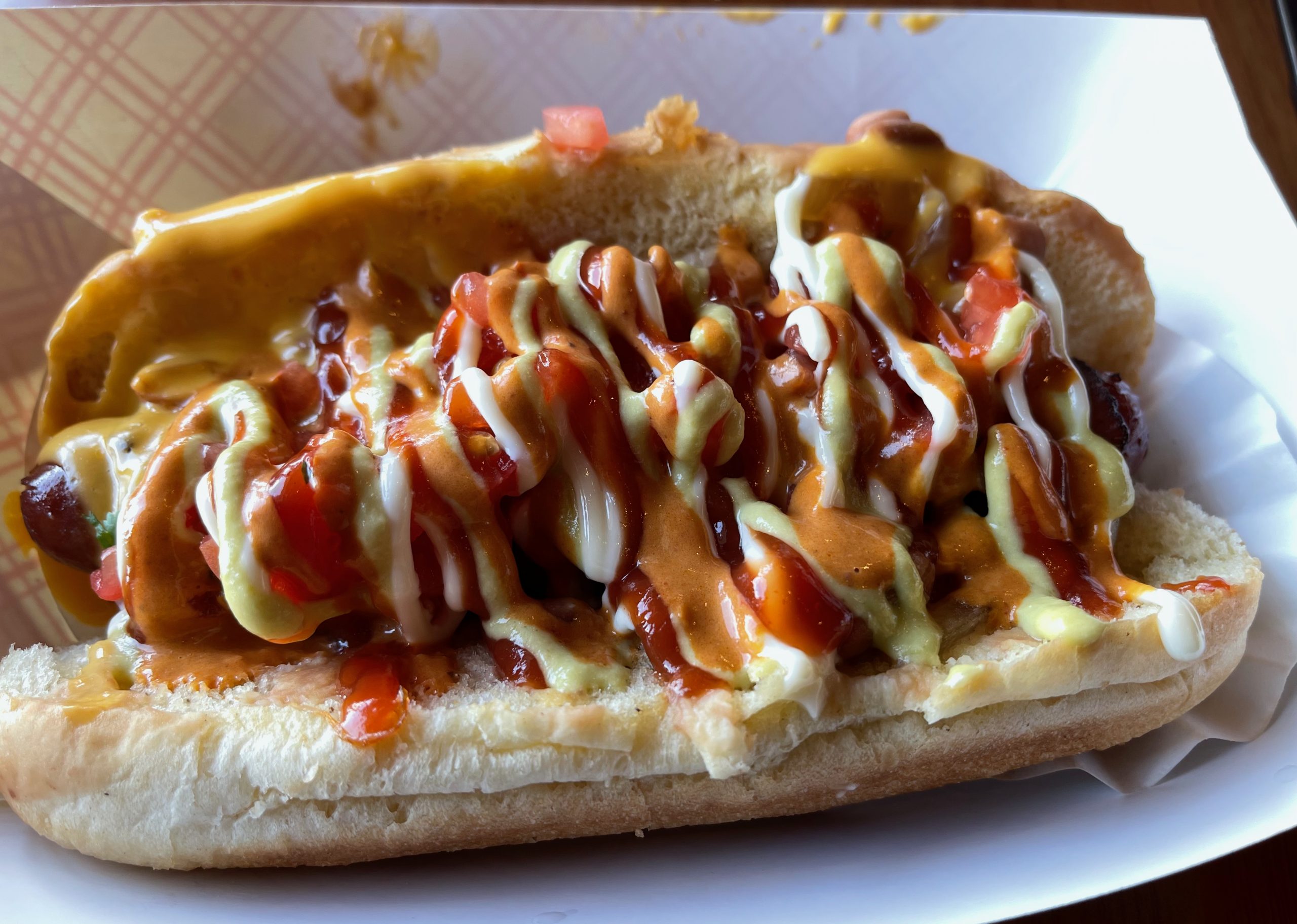 Thanks largely to a 1974 Chevrolet commercial and its catchy tune, the phrase “As American as baseball, hot dogs and apple pie” has purportedly defined what Americans hold most sacrosanct.  Never mind that hot dogs are derivative of European sausages, they’re inextricably part of the fabric of the fruited plain. The National Hot Dog and Sausage Council (yes, there is such a thing) estimates that Americans eat seven billion hot dogs (so it’s not just me) during the unofficial summer season which runs from Memorial Day weekend through Labor Day. That’s 818 hot dogs per second and more than a third of the hot dogs eaten per year!

July 19th has been designated National Hot Dog Day, but a case could easily be made that there are actually two days in which the not-so-humble hot dog is celebrated in America.  The second day, of course, is the 4th of July when Nathan’s Famous Hot Dogs sponsors its annual Hot Dog Eating Contest, the premier competitive event for gurgitators.  It’s no surprise that  several locations under the spacious skies have declared themselves the “hot dog capital of the world.”

It may have started in 1999 when former New York City Mayor Rudy Guliani welcomed competitors at the Nathan’s Famous Hot Dog Eating Contest to “the Hot Dog Capital of the World.”  On my dear friend Becky Mercuri’s terrific tome The Great American Hot Dog Book she quotes New Jersey aficionado and hot dog expert John Fox as declaring that “New Jersey is the hot dog capital of the world.”  That opinion is shared by late great blogger Holly Moore who contended that the Garden State has supplanted Chicago for that honor.    For sheer braggadocio, neither New Jersey, Chicago or even New York can touch New Castle, Pennsylvania which has not only self-glossed as the hot dog capital of the world, but as “the fireworks capital of America.”

For utter inventiveness and passion for hot dogs, mi amigo Mexicano Carlos maintains that no city in the world can match his hometown of Hermosillo in the Mexican state of Sonora.  He reminisces fondly of an Hermosillo market that’s open 24 hours a day, 7 days a week and boasts of two dozen Sonoran hot dog vendors.  According to Carlos, one of the things that makes hot dogs (known as dogos throughout Mexico) in Hermosillo so popular is the endless variety of toppings.  Dogos Del Miami, his favorite Hermosillo hot dog stand offers nearly two-dozen toppings on any given day.

Not yet quite as numerous as taco stands, hot dog stands are making significant inroads as the most popular street food in the Land of Montezuma.  In megalopolises and small towns alike, you’ll increasingly find hot dog stands next to taco stands.  The deliciousness of Mexican hot dogs (and not just Sonoran hot dogs) has actually made it a real choice to between tacos and hot dgs.  My friend Carlos’s advice is to have one (or six) of each.  When he invited me to join him for lunch at Dogos VIP, I feared we just might have six of each.

Dogos VIP opened its doors on June 18, 2021 at the former site of California Pastrami on Montgomery.  Few vestiges of its predecessor remain.  For savvy diners, the term “Dogos” will certainly evoke involuntary salivation.  For everyone else, the restaurant’s external signage is certainly eye-catching with its motto of “Mean Dogs.  Nice Buns.”  As you peruse the menu, you’ll bear witness to the dilemma of which Carlos spoke.  Not only does the menu offer seven different hot dogs, but birria in four forms (tacos, queso tacos, pie and nachos).  Three types of fries grace the menu and no ordinary fries are these (mango habanero fries, anyone?).  Make sure to wash down your meal with an agua fresca (horchata, melon, sandia).  For Carlos, that menu is reminiscent of being back in Hermosillo.

Several readers recently called me on the carpet after a review in which I remained silent (if you can’t say anything nice…) about the frozen, out-of-a-bag French fries a restaurant served with a very good burger.  I won’t make that mistake again.  Fortunately Dogos VIP gave me no reason to criticize.  The fries were fresh cut, thin with an optimum texture (not too stiff, just slightly flaccid) and perfectly salted with just enough grease.  With a golden-brownish hue, these fries are excellent.

Not surprisingly, the menu ensnared us both at Sonoran Hot Dog (beef dog wrapped in bacon topped with beans, queso, grilled onions, diced tomatoes, mayo, ketchup, and jalapeño salsa and chipotle sauce).  Pati Jinich, the James Beard award-winning host of Pati’s Mexican Table describes Sonoran hot dogs as “one of her favorite Sonoran gifts to the world,” indicating it’s “one of those things that just makes me go wild.  Stuffed, spicy, creamy, crunchy, piled high or as simple as can be.  The Sonoran hot dog is a thing of beauty.”

For purists like Carlos one of the things that makes Sonoran hot dogs a thing of beauty is its bolillo bread canvas in which ingredients are nestled.  Maked that piled on.  Carlos benoaned the fact that Dogos VIP uses regular hot dog buns which he figured would just collapse under the weight of toppings a generously endowed Sonoran hot dog requires.  Sure enough, the ingredients did spill out as the buns woefully tried to hold everything in.  “That’s what forks are for,” I argued, but my friend would hear nothing of it.  Frankly, my only complaint is the gloppy ballpark nacho type cheese.  All the other ingredients worked together very nicely.  Dogos VIP’s version of a Sonoran hot dog might not be exactly as you’d find in Hermosillo, but Duke City diners should enjoy it.

We both also opted for the Hawaiian dog (beef dog wrapped in bacon topped with grilled pineapple, grilled onions, queso, diced tomatoes, pickled jalapeños, mayo, mango habanero sauce and bbq chips).  Unlike some persnickety Americans  (and a certain President of Iceland who shall not be named here (mostly because I can’t spell or pronounce his name)), Mexicans don’t have any problem adding pineapple to their pizza, burgers or hot dogs.  It’s a good addition.

When the Hawaiian dog reached our table, we were confused by what appeared to be Corn Flakes topping the overstuffed hot dog.   At first bite, we remembered bbq chips were an essential ingredient in what we agreed was a unique melange.  As with the Sonoran hot dog, the grilled hot dog (Nathan’s Famous) itself was a star.  It reinforced that no one can grill hot dogs as well as hotdogueros (what Mexicans call hot dog vendors).  The pineapple provided tropical notes that worked especially well with the mango habanero sauce (an incendiary blend).

If you have yet to experience birria tacos, you’re among the few.  Birria tacos aren’t just a craze in the Duke City, they’re a nationwide culinary fad.  Birria is addictive.  Essentially it’s an utterly savory Mexican beef stew (best made with goat or lamb, but most often with beef) that’s slow cooked until the beef is tender and fall-apart juicy and delicious. This beefy goodness is stuffed into a taco shell (which itself is dipped in the stew) and fried.  Even better than a birria taco is a birria queso taco in which the taco shell is covered with a molten cheese.  Dogos VIP serves the taco with a small bowl of consomme for dipping.  That’s the way it should be done!

Hog dog aficionados will be transported to an experience as authentic and good as you’ll find in parts of Mexico.  You might also find yourself agreeing with my friend Carlos that maybe the hot dog capital of the world isn’t New York, New Jersey, Chicago or New Castle.  It’s somewhere south of the border with a satellite in Albuquerque.