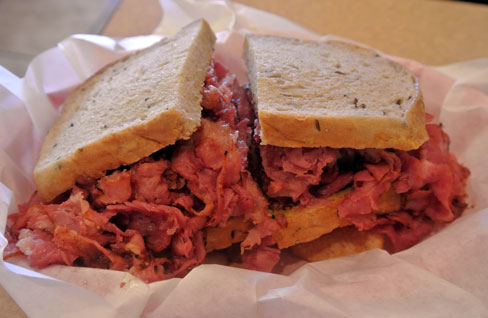 Ultimately George met up with a woman who echoed his sentiments when she declared pastrami to be “the most sensual of all the salted cured meats.” With that proclamation, their lustful appetites took over and they succumbed to the pastrami inspired throes of passion, albeit also incorporating television watching. It’s no wonder George Costanza’s face grew flush when he ate with friends at their favorite neighborhood diner; the association of food with pleasure became a sensual one.

I don’t know about pastrami being the most sensual of all salted cured meats (sounds like a bit of double entendre here), but do know there are few sandwiches quite as wonderful as a pastrami sandwich. Alas, not all pastrami is created equal. The perfect pastrami finds its genesis as brisket given a salt, sugar and spice rub, dry cured, smoked, and cooked. Having grown up in bucolic Northern New Mexico, I had no idea pastrami existed until the Air Force sent me to Massachusetts and I discovered pastrami at Steve’s House of Pizza in Bedford. It was love at first bite. For two years I visited delis throughout New England and New York City (including Katz’s Deli) in search of the best pastrami.

If you’ve ever wondered what the differences are between pastrami and corned beef aside from taste and texture. Pastrami comes from the naval area while corned beef emanates from the brisket area. Where pastrami is given a salt and spice rub, dry cured, smoked then cooked, corned beef is cured in brine. To me, the main difference is that pastrami is much better, but then, like George Costanza, I consider pastrami the most sensual of all salted, cured meats.

Since returning to New Mexico in 1995, I’ve lamented being short-changed insofar as Duke City restaurants or delis not offering a world-class pastrami product, not even close. Fortunately semi-frequent (every few years) trips to Chicago proved to be fulfilling pastrami pilgrimages. Most meat distributors serving New Mexico sell a processed pretender, pastrami “loaf.” I wanted the real thing–whole beef brisket with lots of marbling and heavy, briny seasoning.

Real pastrami is also what Joe Rodriguez wanted to bring to New Mexico. A California native now living in New Mexico, Rodriguez was raised on hot pastrami sandwiches and like dozens of us pastrami paramours, he couldn’t find good pastrami in New Mexico. Rodriguez offers the real stuff–well marbled, briny, highly seasoned and absolutely delicious. It’s comparable to pastrami I remember fondly in New York City and nearly as as good as my favorite pastrami in Chicago.

The rest of us are thrilled that he took it a step further and begin selling it at the New Mexico state fair during the fall of 2006. His success there convinced him there was a legitimate market of passionate pastrami fanatics like me. Rodriguez didn’t start off by selling his pastrami at some fancy storefront. He built a concession trailer and parked it on the corner of St. Francis Drive just as you turn into Alameda. The trailer was furnished with all he needed to prepare his product and was so portable, he took it to the state fair and balloon fiesta.

In November, 2009, Duke City pastrami aficionados no longer had to drive to Santa Fe to assuage their chile fix when Rodriguez launched California Pastrami on Alameda Boulevard. California Pastrami was in that location until January, 2011, its closure coinciding with the opening of a location at 6125 Montgomery, N.E. By year’s end, he had sold the concession trailer and closed the Santa Fe operation. Ever the entrepreneur, in 2017 he launched a second location on Coors Blvd on Albuquerque’s burgeoning west side.  In part because of the Covid crisis, the Montgomery location closed in September, 2020, leaving only the Coors location.

9 December 2012: Having lived on the East Coast and traveled extensively in the Golden State, the term “California pastrami” gave me nightmarish visions of pesto packed pastrami desecrated with sushi grade sashimi, artichoke and the designer vegetable de jour. Fortunately, as it turns out California (since renamed as the “Classic“) pastrami is served on a hoagie bun with yellow mustard and dill pickles (just as some grinder shops in Massachusetts sold it). Even better, this is an outstanding sandwich. It’s got the requisite marbling (for flavor) pastrami lovers crave and the addictive flavor profile that keeps us coming back for more.

Years ago, television and radio commercials for Reece’s Peanut Butter Cups introduced America to a catchy jingle which touted “two great tastes that taste great together” in describing the marriage of chocolate and peanut butter. Until my friend Larry McGoldrick, the professor with the perspicacious palate, suggested it, I had not tried a pastrami sandwich with green chile–a marriage of California and New Mexico. Indeed these are two great tastes that taste great together. Green chile can improve almost everything, including desserts. California Pastrami doesn’t shy away from piquant chile; it’s got a tongue-tingling bite and a nice roasted flavor that complements the pastrami surprisingly well.

20 March 2020: You can also get your pastrami sandwich Eastern style–on light New York-style rye sandwich bread with grainy mustard. Having tried both the “Classic” and “Eastern” style pastrami, I’m not ready to declare a preference. Both are terrific! Make that outstanding! The advantage the hoagie roll has over the rye bread is that it holds up better against the onslaught of juiciness from the fresh, delicious and utterly unctuous pastrami. The advantage of the Eastern-style pastrami sandwich at California Pastrami is that the rye is made on the premises.  While you won’t find the profession “baker” listed on Joe’s resume, he’s got serious rye-baking skills.  Pick up a loaf or six and you’ll never got back the store-bought stuff.

My friend and frequent dining companion Bill Resnik thought he had partaken of good pastrami during his years of travel and was skeptical when I first brought him to California Pastrami in January, 2010. He had no idea what a difference truly great pastrami can make, his previous experiences with pastrami being less than memorable. By mid-February, he had visited the restaurant at least once a week and as often as three times in one week. He’s hooked and has been every since. So are many other Duke City diners, many of whom participate in California Pastrami’s innovative rewards program.

20 May 2014: As for the “More” portion of the restaurant’s name, “more” includes burgers, sandwiches and burritos, some of which I may never try courtesy of pastrami George Costanza would have loved in both the temporal and the Biblical sense. It also includes corned beef and a number of burgers, including a pastrami burger. The pastrami burger is humongous, a generous amount of pastrami, a one-third pound ground beef patty with a slice of cheese, lettuce, pickle and mayonnaise on a sesame seed bun which struggles to contain all that flavor, all those ingredients. It’s a great burger!

Astute members of the defunct Duke City Fix’s Chow Down in Burque Town” forum found it intriguing (to say the least) that mayonnaise and pastrami would share space in the same sentence, much less the same sandwich (the aforementioned pastrami burger). Though a purist myself, I’ve long ceased being surprised by flavor combinations that work surprisingly well. My first experience with pastrami and mayonnaise was at the aforementioned Deli Mart’s elder sibling on Albuquerque’s east side where the much-missed New York transplanted to Albuquerque Cerami family served their pastrami sandwiches in that fashion. My first inclination was to declare that blasphemy, but the mayonnaise-pastrami combination is actually quite good, albeit not as good as pastrami with real deli mustard.

20 March 2020: Call it blasphemy if you will, but I’ve long had a preference for pastrami Reubens instead of the more conventional corned beef Reuben sandwich. A pastrami Reuben at California Pastrami is a thing of beauty. Unlike other Reubens I’ve had in the Duke City, the Russian dressing doesn’t taste like a cloying Thousand Island clone and the sauerkraut won’t purse your lips with its tartness. It’s served on a lightly toasted light rye bread and includes a heaping mound of pastrami, the starring attraction of any sandwich.

3 February 2010: Joe Rodriguez, like me, recognizes the potential in pastrami to improve everything it touches. He didn’t blink an eye during a visit in which I asked for a patty melt sandwich with pastrami. By itself, the patty melt has all the essential elements of a very good patty melt sandwich–a light rye bread grilled until toasty brown, finely chopped onions fried nearly to the point of caramelization, a hand-formed all-beef patty and rich melted cheese. The pastrami elevated it from very good to excellent. Some time I may just ask Joe to add pastrami to one of the burritos served at his restaurant.

3 February 2010: Lest you think California Pastrami is a one-trick pony whose expertise is limited to pastrami, the menu includes several burritos as well as fish tacos (on hard shells, no less) I’ve heard draw utterances of “wow” from other patrons. The restaurant also prepares a very good Philly cheesesteak. It’s served on a hoagie roll and is engorged to overfull with chopped beef steak, finely chopped green peppers and onions and melted white cheese. It’s steaming hot when you bite into it and is as juicy and delicious as just about any Philly cheesesteak you’ll find in Albuquerque. You won’t find a speck of excess fat or sinew on the beef which is very tender.

10 APRIL 2013: Several years ago, television commercials for a pseudo Mexican fast food chain encouraged diners to “make a run for the border.” Duke City diners should run, not walk, to California Pastrami to partake of a new menu item called The Border Dog. The Border Dog is perhaps as close to a Sonoran Hot Dog as you’ll find in Albuquerque. The hot dog is wrapped in bacon and deep-fried. Nestled in the bun are caramelized onions and chopped jalapeños. The hot dog bun is made on the premises and is quite good.

Another addition, perhaps in response to complaints of bread which withered neath the moistness of the steamed pastrami, is a much improved bread baked on the premises. The bread is chewy and formidable enough for the moistness of the steamed pastrami. It doesn’t wither and doesn’t get soggy. Best of all, it’s a delicious bread which disproves the notion that good bread can’t be baked in the alkaline-rich Albuquerque area. Joe not only bakes his own hoagie and rye breads, but the buns for his burgers and hot dogs. The rye bread is especially delicious, a wonderful canvas for sandwiches or toast. It’s amazing how much better bread can be without artificial preservatives.

Joe Rodriguez knows that the best way to grow his business is to invest in his business. To that end, he continues to expand his restaurant’s offerings. A pastry case displays several dessert options, but on balmy summer days only Breyer’s ice cream will do. Currently available only on a cone or bowl, Joe is planning on making milkshakes and malts available in the near future. Smoothies are also available as are some of the best housemade potato chips in Albuquerque.

California Pastrami is one of the best sandwich purveyors in New Mexico, introducing new diners to “real” pastrami while continuing to appease those of us who consider pastrami the most sensual of all cured meats.