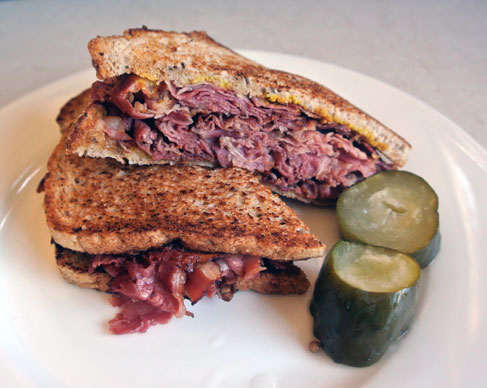 “I flew too close to the sun on wings of pastrami.”
~George Costanza

January 14th has been designated “National Hot Pastrami Sandwich day.” The fact that a day has been designated to honor the greatness of the “most sensual of all the salted and cured meats” is wholly unnecessary for many of us. True pastrami paramours in the mold of Dagwood Bumstead, Shaggy Rogers, Joey Tribbiani and my friend Bill Resnik, don’t need a special reason or designated day to partake of pulchritudinous pastrami. To us, every day is pastrami sandwich day!

Now, if your experiences with pastrami have been limited to the packaged Boar’s Head offering or worse, an occasional Subway pastrami sandwich, you’re probably wondering what the big deal is about pastrami. Offer Boar’s Head or Subway’s version of pastrami to a foodie from the East Coast or the West Coast, however, and you may as well be offering them snake tartare. If you’ve ever had pastrami from either Coast, you’ll understand why.

Pastrami is deli food. It’s not meant to be extricated from a hermetically sealed package or consumed at a chain sandwich shop. Nor is it intended to be lean and trim. Pastrami is a rich indulgence of fatty, spicy, smoky deliciousness. Its addictive properties impact all your brain’s pleasure centers much the way the capsaicin in chile does.

East Coast transplants will argue vociferously that pastrami is not a bi-hemispheric proposition, while residents of the West Coast talk up their own pastrami traditions. Until the 2006 launch of California Pastrami & More, Duke City diners were pretty much shortchanged when it came to outstanding pastrami. California Pastrami acquires its pastrami from The Hat, a Los Angeles area pastrami sandwich shop chain, even East Coast transplants agree is absolutely delicious.

Pittsburgh-born political commentator and Saturday Night alum Dennis Miller spent enough time in New York City to understand the pastrami mystique, yet it was the pastrami from a Santa Barbara deli he recommended to Guy Fieri, the high élan host of Diners, Drive-Ins and Dives. Miller, a Santa Clara resident, describes Norton’s Pastrami and Deli as “very Long Island.” Norton’s sells about 320 pounds of pastrami per week, serving it up six different ways: pastrami dipped sandwich; pastrami, lettuce and tomato (PLT) with chipotle mayo; pastrami Reuben; the NYC (with coleslaw, Swiss cheese and Russian dressing on rye); pastrami cheese (Jack, Cheddar, tomato on grilled sourdough); and of course, The Classic (pastrami on rye).

As with Dennis Miller, this pastrami partisan doesn’t need all that “augmentation.” Pastrami on rye with deli mustard is my ticket. Interestingly Norton’s doesn’t steam its pastrami as California Pastrami does. Instead, the pastrami is grilled on the flat top to give it a slightly crisp texture. Norton’s isn’t chintzy with its portions, engorging each sandwich with a full eight to ten ounces of wonderfully marbled pastrami. The pastrami is sliced thin and piled high, a perfect combination. Texturally, the pastrami has an occasional ribbon of fattiness, but for true devotees, that’s just more flavor. Norton’s pastrami is a bit on the salty side, but its crispiness (courtesy of the flat top grilling) makes up for it. The light rye is perfectly grilled and has an assertive, but not overly so, personality.

Norton’s Deli is no one-trick pony, offering an extensive sandwich menu that includes corned beef, melts, grilled chicken, Philly steak, Hebrew National hot dogs and even salads (since the salads aren’t constructed with pastrami, I’ll never order one). It’s an ambitious menu considering the deli’s tiny digs with no more than five tables in the dining area and about that many bar seats. The “open kitchen” lets you take in all the action–and all the aromas. You may be drooling by the time your sandwich is ready.

As with the light beer commercials from the 1960s, I’m the “great taste” guy and my Kim is the “less filling” gal in the way we order at restaurants. We then tend to split our orders so we can have a bit of both. Her sandwich of choice at Norton’s is the corned beef on rye. There’s no doubt it’s a great sandwich, but there’s no way I’d share a pastrami sandwich. A couple of bites of the corned beef confirmed it’s lean, moist and delicious, but no one I know is lobbying for a “Corned Beef Sandwich” day.