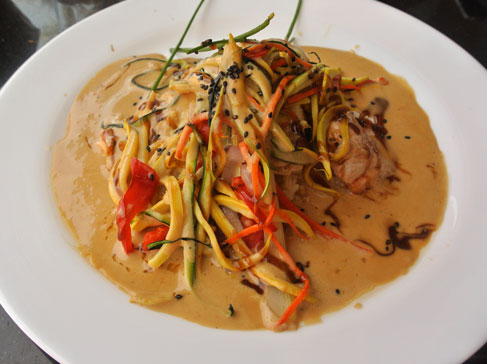 We’re all familiar with premise of Iron Chef America in which accomplished chefs are pitted against the veritable pantheon of culinary giants who have earned the title of Iron Chef. Can you imagine if one of the vaunted Iron Chefs, or even one of the challengers for that matter, failed to present the judges a variety of ways in which the “secret ingredient” is used? How, for example, would the oft-haughty judges react if during “battle rice” Iron Chef Morimoto presented seven different sushi rolls?

Though not led by Iron Chefs, there are a number of fusion restaurants across the fruited plain where you’d swear all the dishes served have a “one-note” flavor profile (usually cloying), the only significant difference being the plating. Conceptually the dishes sound fabulous, but their execution leaves a lot to be desired. Such fusion restaurants perform a tremendous disservice not only to their guests, but to the cuisines they are purporting to showcase in creative manners.

Perhaps that’s why Santa Barbara, California resident and former Iron Chef Cat Cora loves Opal Restaurant and Bar so much. Opal actually lives up to the promise of culinary diversity and creativity with one of the most interesting and evocative menus you’ll find anywhere. Opal’s Web site describes it as “eclectic California cuisine with creative influences from around the world” and boasts that “our chefs use the freshest of ingredients to create dishes inspired by the colorful multi-cultural heritage of America, often with an Asian flair.”

That multi-cultural heritage is perhaps best on display should you dine al fresco where passers-by include a veritable melting pot of America’s huddled masses truly breathing free. To opine that the cuisine of many of their homelands is featured somewhere on Opal’s menu wouldn’t be much of a stretch. On Delish.com, Cat Cora highlighted the menu’s diversity: “its modern Thai menu, with Italian and even Mexican interpretations of classic Thai dishes like Tiger Prawn Pizza with Pesto, Baby Spinach and Roasted Red Peppers, and Lemongrass-Crusted Fresh Salmon Fillet with a Thai Curry Sauce Over Orange Zest Basmati Rice.”

If the aforementioned dishes don’t fully demonstrate a rare culinary diversity, the full menu will. Opal’s culinary offerings demonstrate influences from Italy (including four pizzas), Japan, Thailand, China, Mexico and the United States along with seafood, sandwiches, salads, soups and some of the most exquisite desserts anywhere. Much like America itself, it’s probably best not to try categorizing that menu. Just sit back and enjoy the carefully prepared mishmash of ingredients and flavor profiles.

As you contemplate what to order from a menu which will excite and enthrall you every visit, a basket of multi-grain bread and a ramekin of soft butter are brought to your table. Not all multi-grain bread is created equally well. Opal’s is probably the best we’ve had outside The Mermaid in beauteous Burford, England. With its density and moistness, it’s the antithesis of most multi-grain bread we’ve had in America. It’s also one of the more delicious breads we’ve had with sweet notes sneaking in periodically to balance the savory flavor profile.

One of the more surprising appetizers we’ve seen on any menu is Bouillabaisse, a Provençal fish soup usually served as a main entree. Traditionally there should be at least five different fish in a proper Bouillabaisse, not counting shellfish. Opal’s rendition does not include fish; instead it showcases tiger shrimp, scallops, fresh-shucked oysters in a tomato herb garlic broth with saffron, fresh cilantro, Anaheim chiles, fennel and garlic bread. The shellfish are amazingly fresh exemplars of how shellfish should be prepared and taste. The scallops, in particular, are as sweet, tender and delicious as any scallops we’ve had. The broth is magnificent! Anaheim chiles, fennel and saffron prove a formidable triumvirate of harmonizing ingredients. This is among a handful of the best Bouillabaisse I’ve ever had and best of all, the portion size was enough for two of us.

Perhaps nothing demonstrates how ineffectual my influence is on my Kim’s ordering at restaurants as her insistence on ordering chicken dishes. For me, it’s damn the American Heart Association for proclaiming chicken a more healthy option than beef. I’m a “beef, it’s what’s for dinner” type of guy. Every once in a while, one of the chicken dishes Kim orders is actually quite good and “I told you so” resonates throughout the restaurant. Opal’s oven-roasted chicken breast stuffed with prosciutto and smoked mozzarella is such a dish. Served on a baby spinach salad with tomatoes, toasted pine nuts, fresh Parmigiano Reggiano and a roasted garlic dressing, it’s poultry perfection. Opal’s chefs have figured out how to prevent chicken from desiccating, a minor miracle. They’ve also figured out the pairing of salt, smoky prosciutto and smoked mozzarella actually works well with a surprisingly moist chicken breast. For best results pair the poultry with the salad–a forkful should include a bit of everything.

The most beloved local favorite at Opal is a lemongrass crusted fresh salmon filet with a Thai curry sauce served with julienne vegetables and an apple-orange zest Basmati rice. If you love Thai food but want something more sophisticated than another catfish and curry dish, this is the dish for you. The salmon is wonderfully fresh and is perfectly seared (none of the telltale white, gelatinous bits) with beautiful pink flesh that flakes easily, but not overly so. It’s served with a coconut milk influenced curry that would be mild by any standards of Thai heat while retaining the quality of incomparable deliciousness. The julienne vegetables–zucchini, carrots, onions–are perfectly al dente with the California freshness we love. This is a dish which could become a habit.

The dessert menu, while not expansive, is replete with desserts featuring George Costanza’s dark master, the cocoa bean. All deserts are made on the premises including the phenomenal dark chocolate pecan tort with fresh whipped cream and a vanilla bean creme Anglaise. It’s an adult chocolate dessert with none of the cloying properties of milk chocolate. Instead the chocolate is assertively strong, slightly bitter and wholly delicious. Its foil might be the blood red orange sorbet, a textural and flavor delight with refreshing and tangy properties you will enjoy thoroughly. This is sorbet the way it should be made.

The Iron Chef judges would have a heckuva time deciding which of Opal’s dishes reigns supreme. It’s a certainty they won’t be bored by flavor profile monopolies.

One thought on “Opal Restaurant and Bar – Santa Barbara, California”