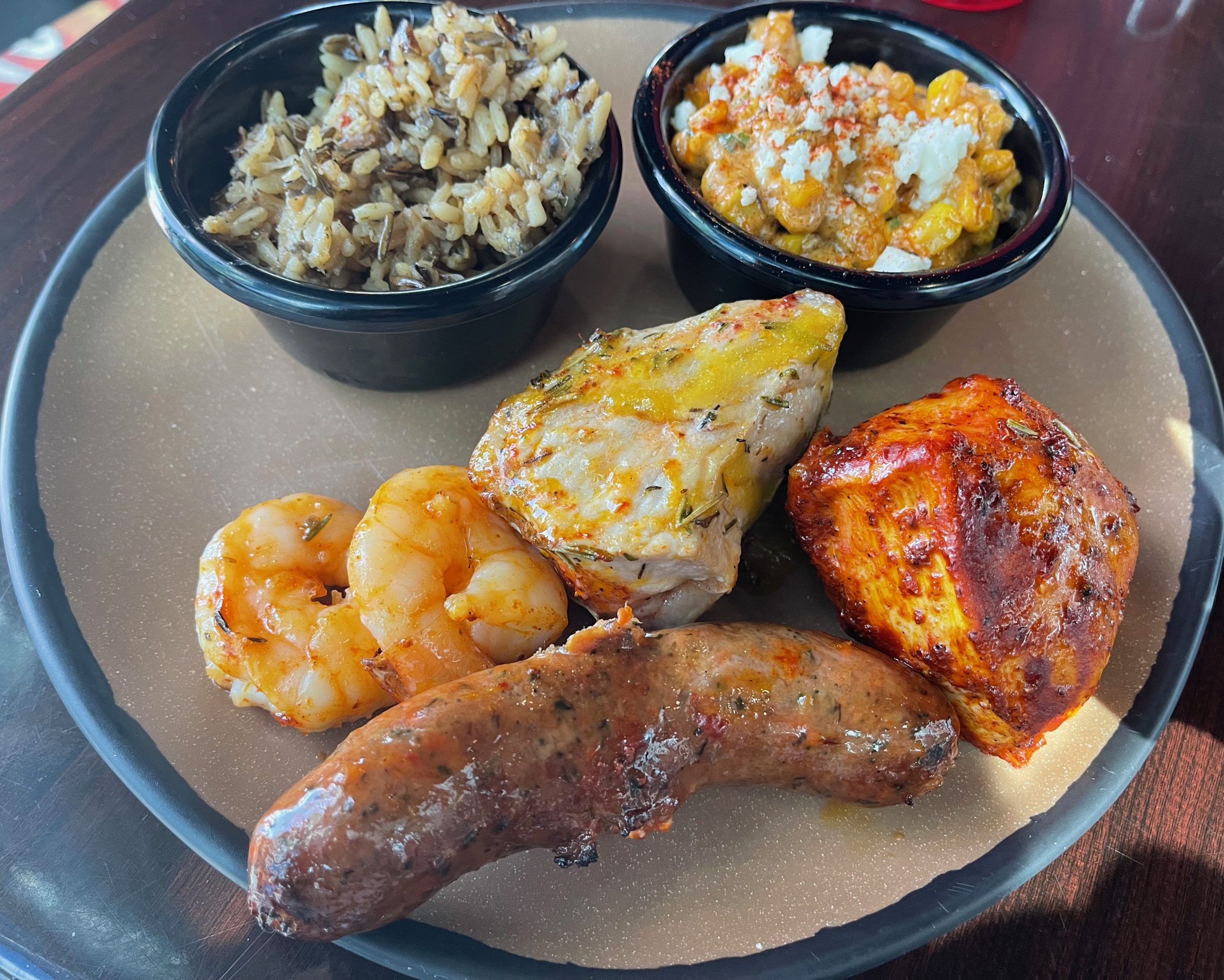 “I have become obsessed with cooking meat over fire.
I get prepared for it. I make sure I’m hungry before I cook it.
The smell of the smoke and the aroma of the crackling meat ignites some ancient genetic memories.
It makes cooking and eating significantly better.”
~Joe Rogan, Podcast Host

Those of us with a carnivorous bent can relate to Joe Rogan’s ode to cooking meat over fire.  There’s absolutely nothing as mouth-watering as the heady aroma and melodious sound of meat searing on the grill or sizzling in a pan.  An argument can easily be made that nothing evokes a wanton lust more than smoke perfumed by meat as it wafts toward our anxiously awaiting nostrils.  The sounds and aromas of luscious meats licking flames on a roaring fire trigger something completely primal in all of us, especially when the pangs of hunger are at their most powerful.  It was that way from the first time a bolt of lightning struck a mastodon and rendered it delicious.

Undoubtedly inspired by the aroma and flavor of that mastodon, homo erectus began throwing slabs of meat into the fire between one- and two-million years ago.  As a a direct benefit of more easily chewing and digesting cooked meat and the surplus energy gleaned from it, the brains of homo erectus doubled in size over the next 600,000 years or so.   Their primate counterparts who continued to eat only raw foods failed to advance–much like the New York Giants football team.  In addition to being stringy and chewy, raw meat tasted like dead animal–a little bloody with notes of iron.  That flavor gave primates a rather nasty disposition–again much like the New York Giants.

Preparing meat over heat was not without its consequences.  Our primate progenitors  singed their hairy fingers every time they reached for a hunk of charred mastodon nestled directly on hot coals.  Because oven mitts and potholders had not yet been invented, early humans figured out they could poke sharpened sticks into their meats to create a handle they used to rotate the meat so it would char evenly.  Not surprisingly, a haughty French troglodyte claimed the technique was invented in France, calling it “rotisserie” or “roasting meat skewered on a spit.”  A spit was not, as some may believe, what French cavemen did when presented Italian meats cooked over a flame.

Being made of wood, early spits were inefficient.  They were prone to catching on fire thereby allowing the meats to fall into the fire.  It wasn’t until the Iron Age that spits became long, solid iron rods that could hold foods cooking over a fire.  Our adroit ancestors–including Ron Popielof the Ronco tribe–continued to innovate and improve rotisserie cooking.  Today there are primarily two styles of rotisserie cooking.  First is the vertical rotisserie in which heat is applied directly from the side or convected upwards from below.  Some dishes commonly cooked on vertical rotisseries include doner kebabs from Turkey, gyros from Greece, shawarma from the Middle East and tacos al pastor from Mexico.

While Costco has captured much of the rotisserie chicken market, among the most accomplished practitioners of the horizontal rotisserie style are Brazil’s gauchos (cowboys).  The Brazilian churrasco (grilling beef, sausage, chicken and various other meat and vegetable combinations on a skewer) has been a tradition for generations in Southern Brazil.  In Brazil’s Pampas (grasslands) gauchos pierced large pieces of meat and slowly grilled them over open-flamed pits.  Today Brazilian style churrasco restaurants such as Albuquerque’s Tucanosseason and cook meats and vegetables on skewers over open-flame grills. The skewers are then brought to your table where sizzling portions are sliced onto your plate.

August, 2022 saw the launch of a rotisserie restaurant fittingly named Fuego 505.  The “fuego’ in the restaurant’s name refers both to the fire in which the meat is grilled and the spices used to enliven those meats with their deliciousness and personality.  Located just south of the demarcation line between Rio Rancho and Albuquerque on McMahon, the restaurant features a 12-spit rotisserie grill.  The “505,” of course signifies the Land of Enchantment’s sacrosanct area code.  At the helm is Chef Raul Maestas who savvy diners will recognize as the highly regarded, award-winning owner-chef of Ohana Hutin Albuquerque’s burgeoning west side.  Guests will be able to watch Chef Maestas, an accomplished competition chef, cook on the grill via livestream.

Fuego 505’s menu is wholly unlike any menu in the city.  An assortment of “tacos from the fire” should draw a lot of interest, but frankly you can find great tacos throughout the 505.  Focus instead on the “Skewers” section of the menu.  Four skewer options, each accompanied by one or two sides, are available for your choosing.  Every skewer plate showcases exotic sausages you may not have had before: rabbit-rattlesnake, alligator and wild boar.  The sausages may be the attention-grabber, but accompanying meats are equally mouth-watering.  A mix of Asian and Southwestern flavors will tantalize your taste buds.  The sides will, too.

My Kim surprised me by ordering the rotisserie featuring alligator sausage.  Although we lived on the Mississippi Gulf Coast for eight years she never developed a taste for alligator (unlike her husband who could probably eat alligator raw and alive).  Also on her plate were achiote chicken breast, pork loin with a jalapeno-mango glaze and Thai sweet chile glazed shrimp.  Her two sides were Cajun dirty rice with andouille sausage and elote.  While both sides were quite good, the elote (Mexican-style sweet corn with a creamy sauce of fresh lime, chile powder, smoked paprika, cilantro and cotija cheese) stole the show.  Only the pork loin and its jalapeno-mango glaze failed to impress.  All the meats were moist and juicy.  Each had its own personality ameliorated by the chef’s deft seasoning.  The alligator, by the way, was so good, my Kim let me have only one bite.

The star of my rotisserie was definitely the wild boar sausage.  If you’ve never had wild boar sausage, think pork with a robust, slightly sweet flavor with bacony notes.  It’s got a nice fat content which adds to its richness and depth of flavor.  Also on the plate were rib eye, achiote chicken breast, Thai sweet chile glazed shrimp and two sides (calabasitas with green chile, tomato and cheese and elote).  The quadrumvirate of meats was very satisfying–maybe as satisfying as the first homo erectus to bite into the mastodon cooked by a lightning bolt.  Every time we make strides toward a more plant-friendly diet, a carnivores delight of a meal seems to block our progress.  That’s certainly not a complaint.  Our ancestors all enjoyed meat and so do we.