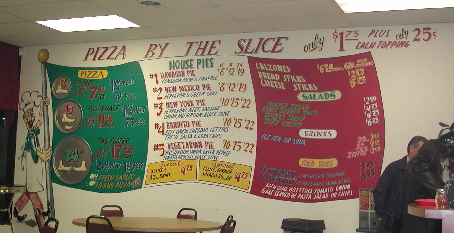 In New York City, pizza by the slice is as ubiquitous as towering skyscrapers. Many of the city’s nearly 3,000 pizzerias serve pizza by the slice. Most have been doing so since the end of WWII when recently returned American veterans who served in Italy craved the sliced pizza they had enjoyed during their service. Heck, in the Big Apple, you can even find pizza by the slice proffered by sidewalk vendors. At about two bucks a slice, it’s usually pretty decent thin-sliced pizza blanketed with cheese.

A widespread presence doesn’t mean the practice is universally approved of. The other school of thought snubs its nose at the thought of serving by the slice, the triangle-shaped, tomato sauced pie Americans consume at the rate of 100 acres a day. Many traditionalists, particularly artisan Pizzaiolis with coal-burning oven pedigrees disdain the practice of pizza by the slice, scoffing that the practitioners of this sacrilege have reduced the art of pizza making to a fast-food assembly-line pretense.

While several pizzerias in the Albuquerque metropolitan area serve pizza by the slice, the lack of historical ties to the genesis of America’s pizza might be the reason you don’t hear the slice versus no slice debate rage on. On August 1st, 2006, Rio Rancho saw the launch of A&K Frattellis in which pizza by the slice isn’t an after-thought; it’s a primary draw. The A&K stood for Aaron and Kyle, the five- and three-year old scions of the restaurant’s owner at the time. Frattelli is Italian for “brother” so the name just makes sense. It also makes sense that a pizzeria in Rio Rancho would serve pizza by the slice; after all, isn’t Rio Rancho still called “Little New York” after all these years.

The A&K portion of the name was dropped when Fratellis was sold, but the formula–gigantic slices of delicious pizza delivered quickly to your table; efficient and friendly service; and reasonable prices–remains. It’s one of Rio Rancho’s most popular restaurants of any genre, one which transcends generations as evidenced by the number of happy families which make it their choice for pizza.

24-inch pizzas are the genesis for individual slices which you can order for a shade under three dollars (a two slice special and a drink goes for just over six dollars, including tax) and top with your favorite ingredients for a mere pittance. Each slice is huge, nearly as big as an entire pizza at pizzerias which specialize in thin-sliced gourmet pizza. It comes out of the oven hot enough to burn the roof of your mouth.

The menu also features five house pies including the Hawaiian Pie (Canadian bacon and pineapple), the New Mexican Pie (pepperoni and green chile) and the New York Pie (pepperoni, beef, sausage, onion, mushroom and black olive). Ask for it and free fresh garlic will be added to any pizza.

The menu, by the way, is prominently displayed on the wall by the restaurant’s entrance as a green, white and red banner (the color of the Italian flag) hoisted by a mustachioed chef.

The pizza is usually terrific. The crust is thick enough to sustain ingredients which are generously piled on, but thin enough so that you can fold it laterally (another sign of New York style pizza). t has just a hint of char and its outside edges are heavily populated with the airy holes that seem to define good pizza. The sauce is applied lightly and is an excellent complement to all other ingredients.

If the New York Pie (not slice) is any indication, Frattellis crafts a fine pie (we normally order pizza by the slice). The sausage is replete with fennel, the pepperoni is tangy and nicely spiced, the mushrooms are deliciously fleshy fungi and the green chile (on my half of the pie) has a comal roasted taste without being particularly piquant.

A friend and colleague from New York consumed a slice and joked afterwards that the pizza contained triptophan, the sleep inducing chemical found in turkey. You can easily share a slice with a friend. Each slice is 12-inches at the top and tapers down to a perfectly pointed bottom. Two slices and you just might fall asleep, the contented sleep of someone who just had a great meal. Be forewarned, however, that sometimes individual slices tend to be hard-crusted, a sure sign they’ve been sitting under a heat lamp.

Fratelli’s joins several terrific pizzerias in the City of Vision. It will give the others a run for their money–any way you slice it!