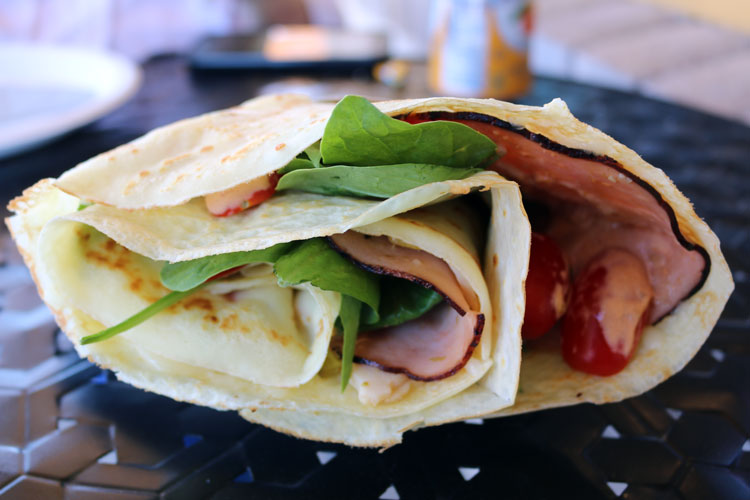 Richard Olney, a cookbook author best known for his books on French country cooking described crepes thusly: “their greatest pitfalls derive, no doubt, from their versatility — not in itself a fault, but a quality that teases many a cook into overstepping the boundaries of sense and taste. One should never lose sight of the fragile and delicate, thin, tender thing that is the crepe itself.”  In his magnificent tome The French Menu Cookbook, he prefaced a recipe for Gratin of Stuffed Crepes with: “crepes may contain practically anything and they represent one of the prettiest and most satisfactory means of disposing of leftovers.”  Then as to demonstrate their versatility, he listed among the ingredients for the stuffed crepe, one calf’s brain.

If you’ve ever partaken of crepes at a French restaurants in the metropolitan area, versatility is probably not how you’d describe those crepes.  Delicious, mouth-watering, delightful…yes, but they won’t surprise you with ingenuity.  They all pretty much uphold French crepe traditions (though surprisingly only one Duke City French restaurant offers Crepe Suzette, the most famous crepe dish in the world).   The versatility described by Richard Olney began with mobile food kitchens (that’s food truck for you, Bob) which began experimenting with sundry ingredients (though not calf’s brains).  That versatility may have reached its zenith with the June, 2016 launch of Crepe Crepe on Eubank in the space previously occupied by the much-missed Duke City Donuts.  Study Crepe Crepe’s menu and you’ll be surprised at the variety of crepe fillings and the combinations in which they’re offered.

The Albuquerque Journal‘s brilliant Jessica Dyer described Crepe Crepe’s sixteen-inch crepes as “a delivery vehicle for all manner of desserts” and as “a canvas for creativity.”  That creativity extends beyond the fillings.  Unlike conventional crepes at French restaurants which are eaten with a fork and knife at the table, at Crepe Crepe they’re wrapped up and served in conically shaped paper, allowing customers to eat them on the go.  Credit that innovation to the Japanese who have embraced the crepe as their own.  During the hour or so we spent at Crepe Crepe, we didn’t see many crepes being taken away.  Most guests, it appears, enjoy spending time at the comfy, cozy little creperie…and besides, who wants to wait.  Crepe Crepe features gluten-free, savory, sweet, build-your-own and creator’s choice crepes.  There’s that versatility again.

22 September 2018: As someone who appreciates versatility but values deliciousness even more, Crepe Crepe’s menu is a godsend, offering both versatility and deliciousness.  My inaugural crepe was the Black Forest Ham and Turkey Crepe (ham, turkey, tomato, spinach, Provolone, Mozzarella and chipotle mayo).  Roughly the size of the tortillas at Duran’s Central Pharmacy and bigger than any personal pan pizza, this crepe is so large, so bulging with ingredients that even infamous gurgitator Joey Chestnut would be hard-pressed to eat more than two.  The ingredients with which the crepe is stuffed are of higher quality than you’ll find in most sandwiches–cherry tomatoes instead of sliced tomatoes, spinach instead of iceberg lettuce, generous slices of turkey and Black Forest ham, two cheeses with different flavor profiles.  The chipotle mayo is the clincher, imbued with a pleasant piquancy that enlivens the entire crepe.

22 September 2018: When my Kim complained that “this crepe is mostly vegetables,” I knew better than to retort with “what do you expect when you order a BLT crepe (bacon, spinach, tomatoes and mayonnaise).  Sure the vegetables were fresh and delicious, but there just wasn’t enough bacon (is there ever?).  Bacon is the first ingredient listed in BLT, but it often seems like an afterthought, especially if you like bacon on your bacon as my Kim does.  Not ironically, another vegetable–New Mexico’s official state vegetable, green chile–would have greatly improved this salad-like BLT.  Mind you, this wasn’t a bad crepe.  Not at all.  It just didn’t have enough bacon.

One of the catalysts behind the French Revolution (1789 – 1799) was skyrocketing bread prices.  Who would have thought that two and a half centuries later, the French would be fighting over another food product, one which originated in Italy of all places.  In January, 2018, a French supermarket chain slashed the price of a 35-ounce jar of nutella by 70 percent. What transpired were scenes reminiscent of “Black Friday” when shoppers trample one another in pursuit of holiday bargains.  Nutella, a beloved hazelnut cocoa spread was created in the 1950s when, thanks to wartime rations on cocoa, chocolate was still in short supply after World War II.  Today, it’s an ambrosial ingredient popular in French toast and crepes.

22 September 2018: For most people, reminiscences of the sensory bombardment that is their inaugural visit to France starts and ends with visual stimuli–the architecture, arts and natural beauty of Paris. What comes first to mind for me is not the sight of a crepe being made before my eyes, but its aroma and flavor. That crepe was slathered with nutella in much the way pizza is slathered with a tomato-based sauce then topped with sliced banana, fresh strawberries and whipped cream. It’s still my favorite sweet crepe and (understandably) the most popular crepe offered by Crepe Crepe. Few things in life are as satisfying or as delicious. It’s a good thing the accommodating staff split the crepe in two or my Kim’s share would have been rather disproportionate.

Whether or not Albuquerque is ready for crepes stuffed with calf’s brains remains to be seen, but the Duke City is certainly ready for the versatility and deliciousness of crepes created with imagination and love.  That’s what you’ll find at Crepe Crepe.