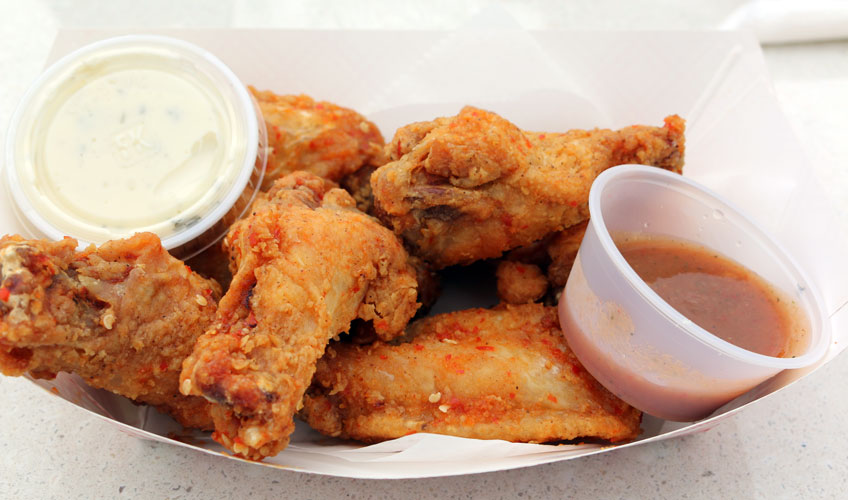 “And believe me, a good piece of chicken can make anybody believe in the existence of God.”
~Sherman Alexie, The Absolutely True Diary of a Part-Time Indian

Two things came to mind when my friend Nader and I approached Happy Chickenzz. First, I mused, “if happy cows come from California (a 2002 marketing campaign for California cheese), where do happy chickenzz come from.” My second rumination was to wonder if the ‘zz’ at the end of the word chicken is an indication that the chicken is so boring, it’ll put your taste buds to sleep. You know, zzzzz. As we were quick to learn, it’s not only the chickenzz who are happy here.  So are diners.  Endorphin-rush happy! Fully sated and blissfully happy! As for putting taste buds to sleep, these chickenzz have so much personality, so much depth of flavor, so much  that they’ll wake up the most staid of taste buds and delight even the most pedantic of palates.

Happy Chickenzz is one of six food pods at the pristine El Vado multi-use complex on Central Avenue just east of the Rio Grande.  The food pods are Lilliputian in size, ranging from 191 square feet to 495 square feet.  Among the food proffering tenants are Zendo Coffee, Happy Chickenzz, Sandia Crust Pizza Co, Buen Provecho (Costa Rican cuisine anyone?), Rollin’ On In and Bosque Burger. Step into the complex, especially if you’re not necessarily in the mood for any specific type of food and you might felt like the proverbial kid in a candy store.  No matter which purveyor you choose today, opportunities abound for further culinary adventures.  That’s one delicious dilemma you’ll happily wade through.  Designers knew what they were doing when they placed so much deliciousness in such close proximity.

Were I not so polyamorous when it comes to food, I probably would have returned to the site of my inaugural El Vado experience for The Cubano, the very best burger to cross my lips in 2018.  To ensure that temptation wouldn’t ensnare me, we visited El Vado on a Tuesday, the only day in which Bosque Burger is closed.  Nader loves chicken which to me is the most boring of all proteins–at least the way it’s prepared at far too many restaurants.  We didn’t quite know what to expect from Happy Chickenzz though it was a virtual certainty it would be far superior to the Colonel’s cluckers (not that it takes much).

Happy Chickenzz is one of the larger (a relative term) food pods at the El Vado complex with actual, but limited seating within the pod.  For people-watching and enjoying the enchanting elements of New Mexico’s sky and weather, however, nothing beats finding a shaded table in the expansive courtyard.  After placing our order, we found just the spot.  Within minutes co-owner Tony Chalenphonh ferried our order to our table and told us a little about his eatery’s concept.  Essentially, Happy Chickenzz is about actualizing the flavor of fried chicken and showcasing its distinctive flavors with exciting sauces all served in a welcoming environment.  Tony also hopes to introduce Duke City diners to elements of Laotian cuisine and promised me chicken won’t be the only featured fare on the menu.  He had already been considering some of the ideas I shared, such as Laotian beef jerky and larb.

14 August 2018: When it comes to chicken wings, many experts say fry, fry again.  Alas, the problem with some double-fried wings is that the second frying renders them as desiccated as a mummified body.  Not so at Happy Wingzz where  wings (available in quantities of six, twelve or eighteen fried chicken wings) are as moist, tender, crispy and delicious as any wings you’ll find anywhere in the Duke City.  With five flavors (Garlic Soy–spicy or regular, Cluckin’ Hot (Laos/Thai inspired), Garlic Ginger, Caribbean Jerk Dry Rub or Old Bay Dry Rub), you’re sure to find one to make your day.  Being fire-eaters, our choice was a six piece order of Happy Wingzz with Cluckin’ Hot sauce.  That sauce has a pleasant piquancy with a little chaser of fruity sweetness.  It infiltrates the light batter and lends its fiery personality to the entire chicken.  What a great introduction to Happy Chickenzz.  During my second visit, my friend Kelley Warnock and I shared an order of Happy Wingzz with a spicy garlic-soy sauce.  Another winger!

When he delivered our meal, Tony also brought us a disposable plastic cup with an even more incendiary sauce than the Cluckin’ Hot.  In fact, the Carolina Reaper-Ghost Pepper sauce pairs two of the most potent peppers in the world.  At 2.2 million Scoville units, the Carolina Reaper is currently the hottest pepper in the world and the Ghost Pepper (1.04 million Scoville units) ranks seventh.  What we appreciated most about this sauce is that it’s not about heat for heat’s sake.  This sauce not only has a fiery personality, it has flavor.  Both are intense and memorable.  They imprint themselves on your taste buds and remain active well beyond your meal.  We mostly used it on the rice and the “Shut Your Mouth” chicken, thoroughly enjoying the endorphin rush.

14 August 2018: Only denizens of the Deep South can make the term “Shut Your Mouth” (or its sister term “Hush Your Mouth”) sound like a suggestion, no matter how serious a verbal infraction the target of that command may have committed.  In fact, the term is often used half in jest as in when directed at some juicy gossip you’re enjoying.  No doubt Tony’s business partner and Happy Chickenzz co-owner Damon Johnson has heard that term a time or two considering he grew up in Baltimore.  It’s therefore fitting that the menu would have a chicken plate called “Shut Your Mouth,” a two-piece chicken meal with a thigh and drumstick that are brined for 24-hours then battered and fried.  A light, golden-hued batter means you don’t have to excavate through layers of fatty batter to actually find the chicken.  Nor will you be discarding  that off-putting batter.  It’s part and parcel of a very enjoyable and virtually greaseless chicken dinner.

14 August 2018: Just as “Shut Your Mouth” has multiple meanings, so does the term “Jerk” which is quite often used to describe an obnoxious person or someone who roots against the Dallas Cowboys.  In culinary vernacular, “Jerk” represents the famous jerk sauce of Jamaica, yet another personality-packed sauce courtesy of Scotch Bonnet peppers (400K Scoville units).  The sauce (actually a dry rub) also includes allspice, cinnamon, pepper and a number of other ingredients.  Not only does it have the kick of a mule, it’s got a heat offsetting hint of sweetness.  Happy Chickenzz Island Jerk, a two-piece roasted chicken meal with a thigh and drumstick seasoned in Caribbean spices, may not magically transport you to the Islands, but it’s the next best thing.

22 August 2018: Hafþór Júlíus Björnsson, better known as Gregor “The Mountain” Clegane on HBO’s “Game of Thrones” can’t be typecast, especially after recently portraying the Kentucky Fried Chicken Colonel and hawking KFC’s Double Crispy Colonel Sandwich.  In the huge hands of the 6’9″ 397-pound former professional strongman, the sandwich looked puny.  Had he been holding Happy Chickenzz El Vado Chicken Sandwich, it would have appeared much more proportionate with his gigantic hand.  The El Vado is one seriously large chicken sandwich, a fried (or grilled if you prefer) chicken breast, fresh greens and a Sriracha aioli sauce.  With huge flavors to match the sizeable sandwich, it’s sure to become a local favorite.  The large chicken breast is moist, juicy and best of all, lightly breaded.  With its pleasant piquancy, garlicky, tangy-sweet personality the Sriracha aioli is a great touch.

19 September 2019:  In a recent article for Business Insider, Irene Jiang described true love in terms only a foodie would appreciate: “True love is a chicken sandwich that makes you feel full, whole, and taken care of. It’s a bun that envelops your chicken in a comforting embrace, a thick slab of juicy, crispy chicken that reminds you of a Southern city you’ve never been to.”   For the longest time, denizens of the fruited plain have found true love in chicken sandwiches from Chick-Fil-A, the most popular chicken chain under spacious skies.  When Popeye’s debuted its own chicken sandwich, America showed how fickle it could be, with social media and local television talking chasing after the pretty new face.  For a few weeks, a war ensued in which devotees of both sides declared their allegiances.

When a well-meaning colleague asked me to weigh in, my personal and very local bias was on full display.  “Why,” I asked “aren’t local loyalists being asked who’s truly got the best chicken sandwich: Happy Chickenzz or Firebird Nashville Hot Chicken?”   And shame on you if you declare your love for those chump chains without having tried the locale fare.  In addition to the El Vado described above, Happy Chickenzz offers the Diablo (fried chicken breast topped with Cluckin’ hot sauce, fresh greens, chipotle aioli and cotinja cheese served on a toasted bun with a side of seasoned fries).  Not only might it make you cry tears of joy, you may shed a few on account of that Cluckin’ sauce which packs some serious heat.  The fried chicken is magnificent–among the very best in town with neither Popeye’s or Chick-Fil-A even close.

19 September 2019:  It’s not often a salad is perhaps the most piquant item on the menu.  Packing even more incendiary punch than the Diablo is the papaya salad (unless you order it at a “medium” or “mild” degree of heat).  It’s got many of the same innocuous components of many salads (cherry tomatoes, mixed greens, cucumber slices, noodles), but it’s also got the most racy, eye-watering sauce, a chief component of which is Thai peppers and their 50,000 to 100,000 Scoville heat units (or about 25 times the heat of a jalapeno).  If you’re a volcano-eater, this papaya salad is for you.

“Happy Chickenzz is Albuquerque’s, first and true international house of chicken!”  That’s how the Happy Chickenzz website describes this purveyor of pleasing poultry.  Not only will it make you happy, you’ll happily recommend it to your friends.