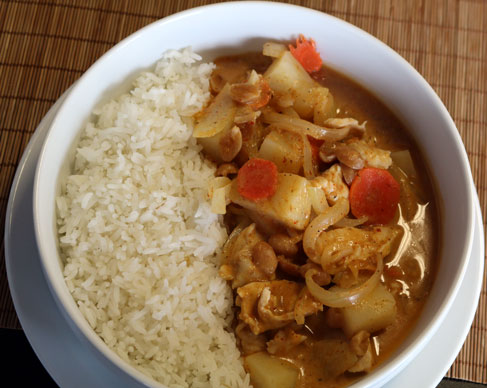 Several years ago during an ice-breaker introduction at project team meeting, we were all asked to introduce ourselves and explain where we were from. Introducing myself as being from Massaman Curry, New Mexico drew absolutely no reaction, leading me to conclude two things: (1) my colleagues knew absolutely nothing about the Land of Enchantment and probably wondered if I needed a passport to get to Phoenix; and (2) despite one of our corporate values being “risk-taking,” none of them had ever dined at a Thai restaurant. These conclusions were reaffirmed during a break when one colleague commented about all the strangely named places in “Mexico,” citing Tacos (Taos?), Captain (Capitan?) and Lost Curses.

When an introductory situation calls for giving my place of birth, my deadpan reply is generally “I was born in Saginaw, Michigan,” a reference to a 1964 song of that title performed by Lefty Frizzel. Because my delivery is so straight-faced (like a mendacious politician delivering a campaign promise), rarely are my impish replies called into question. It would be impossible, however, to maintain a straight-face should someone dig more deeply about Massaman Curry. It’s hard to remain impassive when you’re drooling. Yes, Massaman Curry does have that effect on me sometimes. For years it’s been my ut assolet choice during an inaugural visit to any Thai restaurant. But I digress…

It could well be argued that there IS a Massaman Curry, New Mexico and that it’s clustered in the two-mile span between Constitution and Menaul on Wyoming. Within that stretch you’ll find what is probably the largest concentration of Thai restaurants in the state. At the southeastern-most flank is the elder statesperson (at only ten years) in Thai Tip. About half a mile north is Tara Thai Cuisine, also on Wyoming’s east side. Half a mile further north on Wyoming’s west side, the Hoffmantown Shopping Center is home to both Sizzling Thai and Bangkok Bite. Drive less than a mile west on Menaul and you’ll find Krung Thai. That’s five Thai restaurants in close proximity to each other. That’s a lot of Massaman Curry!

Bangkok Bite opened its doors in March, 2015. True to its name, the restaurant’s emphasis is on Thai cuisine as it’s prepared in the capital city of Bangkok. Unfortunately there’s no way to duplicate the experience of dining on the famous floating river market outside of Bangkok where local cuisine is prepared on floating kitchens right on boats. Experiential aspects aside, you can find wonderful cuisine on the “dry” sections of Bangkok, too. As with all cuisine of the region, Bangkok’s food tends to emphasis the flavor profiles of sweet, salty, hot and greasy. Steamed rice is served with different types of nam prik (chili dipping sauces) and soups.

Ensconced within the fairly monochromatic (can you say stucco?) Hoffmantown Shopping Center, Bangkok Bite has one of the smallest storefronts on the complex, standing out only because of its signage’s yellow Asian font style. The dining room is fairly Liliputian, too, with just about a half-dozen ten four-top tables in close proximity to one another. Even the menu is abbreviated, a far cry from some of the compendium-like menus at other Thai restaurants. Within that menu, you’ll find a smattering of soups, salads, noodle dishes and of course, Massaman Curry.

When you’ve got a limited number of appetizers from which to choose, the decision should be easy, right? Not necessarily. Appetizers at Thai restaurants are not just a precursor to larger deliciousness, they’re often a memorable highlight, sometimes even better than the entrees they precede. Dumplings are always a safe and delicious bet. We expected Thai-style dumplings, the type made from fresh steamed rice noodles, but delivered to our table were the crescent-shaped dumplings more common in China. These are the dumplings to which many Americans refer as potstickers. Engorged with juicy pork and chives in a golden-brown skin with a crispy bottom and springy, chewy sides, the dumplings are served with a thin soy-based sauce which complements them well.

The introductory Thai dish for many diners, especially those of the unadventurous ilk, is Pad Thai. It’s the “safe” choice for the trepidacious of taste. In that respect it’s a sort of the “fried chicken” of Thai cuisine. Pad Thai is generally good. It’s filling, tasty and…passable, but I’ve never had exceptional, life-altering, transformative Pad Thai. My Kim loves it, however, and she’s fine with it being “just good enough” (which might explain why we’ve been together for thirty years) and it suits her sweet-tooth. The Pad Thai at Bangkok Bite is just fine…as good as you’ll find at any good Thai restaurant in town. It’s just not especially memorable which makes it par for the course. If I’d had my druthers, it would have been covered in prik nam pla, my favorite Thai chili and fish sauce condiment.

A friend of mine from Santa Fe who shares my passion for Massaman Curry considers its fragrant bouquet a sort of aromatherapy. Her ritual involves not only bending down to inhale the comforting aromatic spices, fresh herbs, rich coconut and full-flavored curry, but in using her hands to fan its steaming aromas upward to her awaiting nostrils. She loves the purity of Massaman Curry by itself and does not mix it with the steamed rice which customarily accompanies the curry. On the basis of this practice, she might not have liked the Massaman Curry at Bangkok Bite.

That’s because the steamed rice isn’t plated separately from the Massaman Curry. At Bangkok Bite, the twain does meet, whether you want it to or not. Although there is a clear demarcation between rice and curry, my friend would find it too easy for the two to mix and not in the proportion she would like. She makes a good point! The Massaman Curry is a harmonious interchange of sweet and savory flavors in a rich, yet mild and thoroughly delightful dish. Alas, perhaps because of its plating, there just isn’t enough curry and there’s too much rice. The ratio of curry to rice should be about 65/35 or the rice absorbs the curry and renders the dish a bit on the dry side. By itself, the Massaman Curry is a pleasure to eat, but is best when plated separately from rice.

It’s become increasingly rare for Thai restaurants to cite “seasonal availability” as reasons not to have mangoes with sticky rice on the menu year-round. Alas, the mangoes are generally not those grown in Southeast Asia, but those grown in Mexico and other tropical nations in the western hemisphere. Proximity has increased their availability greatly, much to the detriment of American waist lines. Paired with sticky rice in rich, sweet coconut milk, there may be no dessert which couples fresh, tangy fruit with a sweet-savory complement so deliciously. The mangoes and sticky rice at Bangkok Bite will remind you why “off-season” can be so painful.

The aforementioned stretch of pavement on which several Thai restaurants can be found will probably never be known as “Little Thailand,” but anyone jonesing for another Thai restaurant to add to their rotation should visit soon…and often. Bangkok Bite is a welcome addition to the Duke City’s Thai cuisine scene.