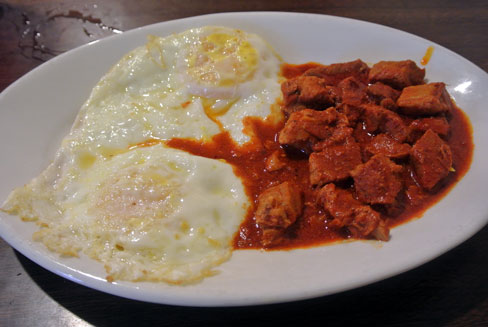 In the frontier wilderness of New Mexico–long before the advent of culinary schools and home economics classes–a cook’s credentials weren’t bestowed by some accredited institution of higher learning. Instruction in the culinary arts was most often imparted lovingly by mothers. Recipes were passed on from one generation to another, using ingredients often grown in the family farm and livestock raised locally. “Credentials” were earned by reputation and the word of mouth of satisfied diners (most often family members, neighbors and visitors). A good cook was known about far and wide.

Lollie Padilla can relate to the New Mexican culinary traditions of yore, having worked next to her mother (to whom the restaurant is dedicated) in learning to cook homemade, wholesome New Mexican dishes at a very young age. On April 3rd, 2013, Lollie launched the eponymous Lollie’s New Mexican Food restaurant in the Barelas-South Valley area in which she was raised as were generations of her family. Two things are immediately obvious: Lollie was a very good student and her mother was a very good cook.

Don’t let the restaurant’s motto “Proudly Serving The Southwest” confuse you. There are no pretenses to food being influenced by a mixed bag of Spanish, Mexican Native American, French and California genres as “Southwest cuisine” is defined in some upscale Santa Fe restaurants. Lollie’s serves New Mexican food the way it’s been served for generations. The “Southwest” portion of the motto refers to Albuquerque’s southwest quadrant where the restaurant is located. It’s off the well-beaten (and eaten) path just a few blocks north of popularly anointed restaurants on Route 66.

If you’re driving south on Isleta, you might miss Lollie’s which, despite a street-facing storefront, is a bit obfuscated from view. Just remember it’s directly across the street from Dairy Queen about half a mile from where Avenida Cesar Chavez turns southward to Isleta and you’ll get there. The nearly almost always full parking lot evinces that a lot of hungry diners have found it. Lollie’s is open only for breakfast (starting at 8AM sharp) and lunch seven days a week. On weekdays it closes at 2PM and on weekends at 3PM.

Lollie is a peripatetic presence at her colorful restaurant, meeting and greeting regulars and those who will become regulars (it should take only one visit). She’s a very engaging and friendly person with a broad, warm smile after every compliment she receives–and she receives many. During our inaugural visit we were so touched by the authenticity and homey familiarity of her cooking that we thanked her for keeping it real. For Lollie, keeping it real means chile with piquancy and absolutely no cumin. It’s the way her mother taught her.

The restaurant is comprised of three distinct dining rooms. The front room includes a view not only of the cashier’s station, but of the counter at which servers pick up orders to be delivered to lucky guests. Seating is more functional than it is attractive. The wait staff is cheerful and attentive, working as a cohesive unit to make sure your beverages are replenished and everything is to your satisfaction. The servers rank up there with Joe Guzzardi’s team at Joe’s Pasta House in Rio Rancho in terms of friendliness and professionalism.

You won’t be seated long before a basket of chips and ramekin of salsa are delivered to your table. The first order is complementary. You’ll have to pay a pittance for the second order. Trust me, you’ll ask for a second helping. My friend Bill “Foodie Star” Resnik was thoroughly besotted by the salsa, a pleasantly piquant blend in which red chile is discernible (surprisingly not many New Mexican restaurants use red chile on their salsa). It’s fresh and piquant, the type of salsa which pairs very well with hot coffee which accentuates its piquancy oh so well.

5 June 2017: The qualities most in evidence in Lollie’s guacamole salad are freshness and flavor. Mashed from fresh avocados at their prime of ripeness, the rich, meaty avocados are the most prevalent flavor component. Alas, if you’re wary of guacamole being succeeded by “salad,” you probably won’t like all the lettuce on the plate. Purists don’t want lettuce getting in the way of their guacamole. This is a very good guacamole which should be liberated from its lettuce bed.

The menu includes daily specials for every day but Monday (and if ever a day needed something special, it’s Monday). It’s a comprehensive menu offering all New Mexican food favorites as well as burgers. “Southwest Lunches” are served with beans and papas and your choice of red or green chile as well as tortillas. Ask your server for a recommendation and chicharrones will invariably be mentioned (for good reason).

2 June 2014: Appetizers include quesadillas, chile con queso, chile cheese fries with your choice of red or green chile, Rio Grande nachos, the aforementioned guacamole salad and a side of chicharrones with red or green chile. Another good bet from the a la carte menu are the tostadas (including one topped with carne adovada). A simple beef and bean tostada is everything New Mexicans love about this very simple–and very delicious–snack or starter. The fried tortilla shell is too delicate and the toppings too generous for you to pick everything up intact, but a fork will do just fine. Immediately obvious is the fact that the ground beef hasn’t been refried, a nefarious practice in which almost every other New Mexican restaurant engages. Fresh ground beef, shredded cheese, lettuce and chopped tomatoes in good proportion topped with salsa–for what more can you ask.

2 June 2014: If you prefer your crispy corn tortillas to remain intact, you can order the taco plate (three tacos), a single ground beef taco from the a la carte menu or a combination plate. Some may say a taco is basically a tostada folded like a sandwich, but it’s so much more than that. A taco is hand-held comfort, the perfect snack whether mobile or stationary. As with the tostada, the ground beef is freshly prepared and lightly seasoned. Despite being deep-fried, it’s not greasy at all. Apply Lollie’s salsa liberally for best results.

2 June 2014: Saturday’s special is a carne adovada breakfast–two fried eggs, carne adovada and a tortilla. You’ll never again crave Captain Crunch or other breakfast cereals of that ilk. Carne adovada is the perfect morning wake-up food. Unlike some New Mexican dishes which might shock you awake with piquancy, carne adovada wakes you up with the loving caress of porcine perfection, tender tendrils of cubed pork marinated in a rich, delicious red chile. This is a chile my adovada-adoring friend Ruben Hendrickson needs to try. Good as it is, there isn’t as much of it as you’ll want…not enough of a good thing.

2 June 2014: When Spanish conquistadors risked life and limb in pursuit of gold, had they known about chicharrones they would have stopped there. Chicharrones, small, fatty cubes of deep-fried pork, are a New Mexico treasure worth their weight in gold. New Mexicans in quest of wonderful chicharrones need not go further than Lollie’s where these crispy pork cube are available on burritos and sopaipillas. A chicharron stuffed sopaipilla is an excellent way to sample them. “Stuffed” should be prefaced with “generously” because you’ll find plenty of golden-brownish porcine nuggets within each sopaipilla. The stuffed sopaipilla plate includes two sopaipillas, the perfect vehicles for both red and green chile. Lollie’s chile has a pleasant piquancy with the green having more bite than the red. Both are delicious. Refried beans and cubed papitas are also excellent.

5 June 2014: The menu includes two combination plates. Both include a ground beef taco and a cheese enchilada, but one comes with a chile relleno and the other with a homemade tamale. The tamale, one of the very few things not made on the premises, is not to be missed. Lollie’s tamale maker should be knighted for creating one of the very best tamales in Albuquerque. The proportion of corn masa to pork is absolutely perfect with the flavor of each complementing the other very well. The cheese enchilada is excellent. Being a combination plate, you should combine both red and green chile with this terrific plate.

20 July 2017: Several years ago, my Intel colleagues hosted a team luncheon at Macayo’s Mexican Table, a very popular Arizona-style Mexican restaurant. The New Mexicans among us took to calling it “Mocoso’s,” a Spanish term used to describe a snotty brat. None of us liked it (to put it mildly). Ask most New Mexicans and few of us would ever concede that anything edible has ever been invented in Arizona except for maybe the chimichanga. In 1922, Monica Flin, founder of the Tucson restaurant El Charro accidentally dropped a burrito into the deep-fat fryer. Thus was born the chimichanga.

We’ve had a chimichanga at El Charro and we’ve had them in New Mexico where our sacrosanct red and (or) green chile transform the dish into a masterpiece. One of the very best we’ve had across the Land of Enchantment is Lollie’s version, Friday’s special of the day. What distinguishes this chimichanga from most is that it’s lightly fried. It’s not sheathed in a thick, hard-to-cut tortilla. You can cut into it with a spoon where you’ll extricate seasoned ground beef. The chimichanga is topped with melted, shredded cheese and covered with your choice of red or green (go Christmas here) chile. If I didn’t previously mention how good the refried beans are, let me take the opportunity here to tout them as some of the very best in town. So is the chimichanga, the Arizona mistake that it takes New Mexicans to perfect.

Lollie’s embodies the heart and soul of Albuquerque’s South Valley, showcasing the type of New Mexican cooking generations of mothers have passed on to their children. Every neighborhood should be so lucky as to have such a homey, tradition-oriented restaurant in its midst.