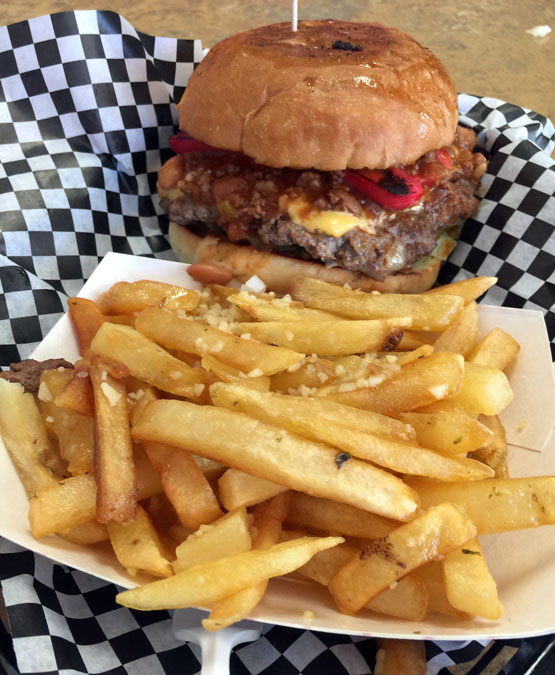 Back in the 1960s, A&W’s Papa Burger was a rite of passage for me. By age nine, I had surmounted the phased progression through A&Ws burger family–Baby Burger, Mama Burger and Teen Burger–and was ready to prove my mettle with the largest of A&Ws burger family, one beefy behemoth only my dad, a paragon of masculinity, had ever ordered. Earning the right to order one was acknowledgement that I was growing into a man. Polishing one off brought newfound respect from my younger brothers, both of whom longed for the day my dad would order a Papa Burger for them.

In the 1960s, A&W’s burger family signified a formidable line-up of burgers served in more than 2,000 A&W restaurants throughout the fruited plain and Canada. Each member of the burger family was represented by cartoonish fiberglass statues, the largest of which was the Papa Burger, a bald, vested gentleman holding a large frosted mug on one hand and a gigantic burger on the other. Papa Burger stood eight and a half feet tall and the frothy mug of root beer was three feet tall.

Driving on Chavez Avenue just west of Fourth Street and espying a restaurant called Papaburgers brought a nostalgic pang to my heart. That nostalgia made me hopeful that A&W was preparing to mount a challenge to the Big Three (McDonald’s, Wendy’s and Burger King) and would no longer be relegated to sharing space with abhorrent chains. Though I disdain chains, A&W still represents growing up to me. The name on the marquee dashed those hopes quickly. It read “Papaburgers” not Papa Burgers. No, this was an A&W offshoot.

Papaburgers has its roots in El Paso, Texas where in 2008, entrepreneur Eric Zubia launched the first instantiation of what has become one of the Sun City’s most popular burger joints. As of this writing, ninety percent of visitors to El Paso’s Zomato Papaburgers page indicate they like it with some being effusive in their praise. Sadly, as of this writing, I’d venture to say fifty percent of Albuquerque diners still have no idea about this terrific burger restaurant (unless they read Gil’s Thrilling (And Filling) Blog), of course.

That’s not entirely their fault. Albuquerque’s Papaburgers, open only since November, 2009 is ensconced in a nondescript shopping center where it’s barely visible from heavily trafficked Fourth Street. Get the word out! This is a very good burger joint, one that is rapidly becoming an Albuquerque favorite. In El Paso, customers queue early and often to get their burger fix in a restaurant with limited seating. In Albuquerque, you can still walk up to the counter, place your order and sit where you want.

Finding a seat is no problem in the Los Ranchos Papaburgers, a sprawling corner edifice which doubled its space within two years of opening to accommodate all the diners who discovered this unique bastion of burgers. In three years, the ambiance has gone from prosaic to rather busy with a lot to see everywhere you turn. The menu is sparse, about a dozen items, but there are always specials on the board. A jukebox and an old-fashioned video gaming console make the expanded dining room just a bit noisy at times.

When Eric Zubia mentioned possibly expanding into the Albuquerque area, his Rio Rancho-based uncle Silver and aunt Adriana Zubia leapt at the opportunity. As with the original Papaburgers, the freshness of ingredients is a strong point of emphasis. Each burger is made to order on a flattop grill from freshly ground beef in which finely chopped onions are integrated right into the meat. The burgers are adorned with lettuce, tomato, pickles, more onions and your choice of mustard or mayo. The restaurant’s eponymous Papaburger can be topped with American or Swiss cheese.

Your table haul should also includes plenty of green chile sauce which you can add to your burgers, fries, hot dogs or onion rings. The green chile is mild by any piquancy scale, but it’s got a garlicky kick potent enough to ward off a family of vampires. Papaburgers’ version of a green chile cheeseburger is called the Chiara Burger (named for Eric Zubia’s goddaughter). Instead of finely chopped chile, the burger is crafted with long green chile. It’s lacking in the piquancy New Mexicans love.

During our inaugural visit back in 2009, my friend and frequent dining companion Bill Resnik took one bite of the Papacheeseburger and declared “it’s just like Lotaburger.” Considering his devotion for Lotaburger (which he considers New Mexican comfort food), that’s a high compliment. As with Lotaburger, the ingredients are extremely fresh–crisp lettuce, juicy tomatoes, lip-puckering pickles, eye-watering onions. The biggest difference is the onions incorporated right into the beef. Bill’s sole complaint is that the beef was slightly overdone, sometimes a problem with thin beef patties.

17 July 2017: You can request double meat with any burger or you can try something entirely different–the Andre Burger (named for Eric Zunia’s godson). Hamburger meets hot dog in this unique offering–fresh ground beef with onions, lettuce, tomato, pickles, chili, weenies, American cheese and mustard. As if weenies isn’t unique enough, the chili also includes beans. It’s not a burger for everyone, but if you have a penchant for the slightly different, this is a burger you will absolutely love.

You’ll love it as a composite of terrific ingredients and you’ll love the interplay among those ingredients. The chili is mild, but has a nice garlicky flavor that almost completely obfuscates the hint of cumin. The weenies are of the thin-sliced variety, not those flavorless two-inch in circumference meat tubes that seem to be in fashion today. I liked them so much, my second visit order was a Papadog. Papadogs are described as a “round hot dog” and are served on hamburger buns. The buns are toasted and sandwich between them, weenies sliced in half then topped with pinto beans and chili with ground beef. A smear of mustard and several sliced pickles adorn the bottom bun. Though somewhat unconventional, this is a good hot dog that warrants return visits.

Papaburgers is no one-trick pony. The menu, though limited, also includes a grilled chicken sandwich basket, chicken nuggets and a grilled Papacheese Green Chile sandwich. Sides include French fries, onion rings and chili cheese fries. The fries and onion rings are out of a bag, but are quite good when doused in the green chili on each table. Perhaps the most intimidating item on the menu is an all-beef Chili Cheese Foot Long Coney from Nathan’s. Bob of the Village People who’s consumed over 550 feet of hot dog from The Dog House Drive In won’t have to consume quite as many to get to 550 feet. It’s a beefy behemoth.

Papaburgers may have nothing to do with the A&W of my youth, but it’s a rite of passage in its own way–as Food Network star Guy Fieri might say, “a passage to flavortown.” These are seriously good burgers!