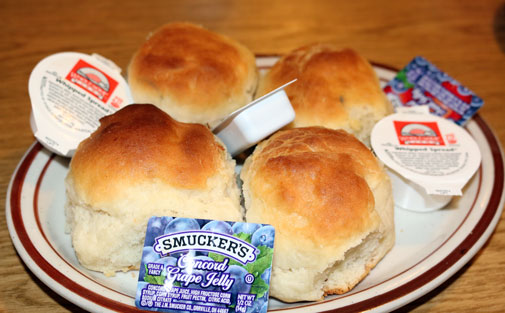 Since the 1930s, neon signage has been a prominent and vital part of Route 66 as it meanders through Albuquerque. From the foothills of the Sandias in the east to the parched desert expanse of the west, Route 66 is festooned with vibrant neon signage that cuts a luminous swath through the city. The nocturnal spectacle of glowing neon might be the siren’s call that has drawn generations of “cruisers” to Central Avenue.

One of Albuquerque’s most prominent neon spangled signs celebrates Route 66 as it spans across all four lanes of Central Avenue near its intersection with Coors Boulevard Southwest. Literally at the shadow of that span is the Western View Diner & Steakhouse which has been pleasing weary travelers and hungry locals since 1937 thanks to generous portions of reasonably priced and delicious comfort food with a homemade taste that comes from years of plying its culinary craft.

To say the Western View Diner & Steakhouse was at Albuquerque’s western fringes back when it launched seven decades ago is an understatement. Aside from sagebrush and vast expanses of horizon, there wasn’t much in the city this far west. The Western View is one of the very few surviving restaurants which predate the tremendous expansion that has seen the city’s population skyrocket from just over 36,000 in 1937 to over half a million in 2010.

Because of its longevity, this venerable Albuquerque institution was, in 2010, named to the New Mexico Tourism Department’s “Culinary Treasures Trail,” an initiative which honors those rare and precious family-owned-and-operated gems operating continuously since at least December 31st, 1969. As with all the restaurants on the list, the Western View Diner & Steakhouse is an independent mom-and-pop restaurant which has stood the test of time to become beloved institutions in its neighborhoods and beyond.

The menu primarily features American standards with New Mexican, Greek and Italian entrees thrown in for good measure. The diner has been owned by three successive Greek proprietors, the most recent being Stavros Anagnostakos. Like many august diners, the Western Diner’s character is in its austerity, its staff and its clientele. One wall features vintage black and white photographs of the stars of yesteryear. Frequent diners prefer to sit at a stool along the counter. That gives them the best vantage point for the dessert tray and better access to the chatty and accommodating wait staff. Tchotchkes of a bygone era line a shelf over the cash register.

Yes, this venerable restaurant has character to spare despite lacking the over-the-top flamboyance of the anointed local favorites and cookie-cutter chains. It’s informal and inexpensive, unpretentious and welcoming…a genuine anachronism. It’s no wonder its parking lots are always full. Look around the dining room. What you’ll see is generations of families, many of whom grew up visiting the restaurant. This is a neighborhood institution which has been doing the right things right for its faithful patrons.

The Western View Diner serves breakfast all day long. There’s something almost musical in the clanking of spoons as they stir coffee at all hours of the day. There may also be nothing more arousing (to both genders, but particularly men) at 3PM than the sizzle of crisp bacon on the frying pan and its accompanying aromas as they waft throughout the dining room. That’s what we experienced during our inaugural mid-afternoon visit when at least half the dining patrons were partaking of breakfast.

5 December 2010: Although the diner is renown for its fluffy, house-made biscuits and gravy, an excellent alternative are the pancakes. A short stack means two fluffy orbs that nearly cover the entire plate. A dollop or two of creamy butter, a ladle of syrup and you’re in carbohydrate heaven. It’s been our experience that long-established diners serve the very best pancakes and the Western Diner is no exception. The Western View is also quite accomplished at American breakfast standards. Regardless of what you order–breakfast or lunch–a biscuit or ten is a must. These biscuits have a rare “biscuit integrity” in that they don’t crumble and fall apart when you attempt to slather on some butter and jam. Moreover, they’re very tasty and are excellent for sopping up gravy.

17 June 2007: One of the entrees for which this restaurant is known is steak (hence the “Steak House” on the marquee). For just about a dollar an ounce, you can treat yourself to a fresh-cut New York steak that’s heavy on flavor and surprisingly light on the gristle and fat you might expect for an inexpensive cut of beef. Grilled to your exacting specifications (we like salt, pepper and garlic on both sides), it’s a carnivore’s dream. The New York cut is much better than we’ve had at many an Albuquerque steak restaurant, especially at the price.

17 June 2007: The steak is served with your choice of potato–baked potato after 5 PM, mashed potatoes and French fries before then. The mashed potatoes are among the best we’ve had in this city–far better than the de rigeur garlic mashed potatoes served seemingly everywhere. These are real potatoes with a buttery creaminess that reminds us of home. A thick piece of buttered Texas toast fills what little room is left on the plate. It, too, is so much better (and bigger) than Texas toast we’ve had elsewhere.

3 April 2016: My friend Bruce “Sr. Plata” would like the next New Mexico Tourism Department’s culinary initiative to be a “New Mexico Chicken Fried Steak Trail” patterned after its Green Chile Cheeseburger Trail. Though chicken fried steak is more the domain of Texas than it is of New Mexico, there are several potential chicken fried steaks in the Land of Enchantment that could grace such a Trail. One would be the chicken fried steak at the Western View. It’s a thin, pounded, lightly breaded steak covered with a rich, creamy gravy served with two eggs and home fries. The gravy is ladled on rather generously which is a good thing if you love gravy…and this is a gravy you’ll probably love. If not, refer back to my suggestion that you order one (or ten) biscuits. Because the chicken fried steak is made with a pork sausage gravy, Sr Plata orders the Vaquero, a large chicken fried steak smothered in chile “Christmas-style” with two eggs and a tortilla. He loves it!

3 April 2016: For my Kim, the quintessential breakfast to remind her of home in Chicago is a breakfast of pork chops. At the “Hog Butcher for the World” (a nickname for Chicago), you’re likely to get inch-thick pork chops even early in the morning. In Albuquerque, an order of two pork chops stacked atop one another wouldn’t equal an inch. Though thin and about the diameter of a hamburger patty, the Western View’s pork chops are seasoned nicely (salt, pepper, garlic) and grilled well. They’re served with two eggs and home fries.

17 June 2007: The Western Diner’s comfort food ensemble will warm the cockles of your heart as it sates your appetite. For those of my generation, it will bring back memories of home-cooked meals in which steamy plates of meatloaf, mashed potatoes ladled with brown gravy and corn were a Sunday tradition. The meatloaf, by the way, is in the best traditions of American diners–moist and served thick. Cut into it and steam wafts upward, an indication this dish is served hot, the way it should be. The gravy is thick with flecks of ground pepper swimming in the murky liquid.

Western View’s diner has a rather extensive, multi-page menu that showcases New Mexican favorites–everything from tacos and burritos to combination plates brimming with food. The combination plates are served with a fiery salsa that goes well on everything. Alas, the chile is adulterated with cumin so we never order the restaurant’s New Mexican food. Because seating is in fairly close proximity, we have noticed that diners who do order chile-laden items seem satisfied with their meals.

3 July 2018: In the tradition of American diners and their “everything but the kitchen soup” menus, the Western View has a three-item Italian food section offering veal cutlet Parmigiana, chicken cutlet Parmigiana and spaghetti. The veal cutlet Parmigiana is a slab the size of the tablet on which the ten commandments were inscribed topped with a molten blanket of mozzarella and a generous amount of “red” sauce. Okay, the sauce doesn’t come from Joe’s Pasta House, but then, Joe’s doesn’t do biscuits like the Western View. Still, it’s a very nice sauce with plenty of oregano-infused personality. The accompanying spaghetti is satisfying and filling.

5 December 2010: Another old-fashioned standard reminiscent of bygone days in which malt shops were the hang-out of teenagers are milk shakes. These are served in old-fogyish hard plastic glasses, the type of which probably predate most of you reading this review. Made with real ice cream, the milk shakes are served thick and cold, easier to drink up with a spoon than with a straw. They’re also served with a thick dollop of real whipped cream topped with a single cherry, another time-honored tradition.

5 December 2010: Of course, nothing goes better with shakes than the marriage made in malt shop heaven, a vintage cheeseburger and a mound of French fries. The deluxe burger is an ten-ounce beefy behemoth grilled to about medium well, topped with a single slice of American cheese and served on toasted buns. On the side are a plastic cup of green chile, a single tomato, four dill pickles, a slice of raw onion and shredded lettuce. This is an excellent burger, as good or better than several on the New Mexico Green Chile Cheeseburger Trail despite being as simple as a burger can be.

Order a burger and you might not be asked to what degree of doneness you’d like for it to be prepared, but the results are flavorful nonetheless. The beef patty has a nice grilled flavor reminiscent of a burger prepared outdoors. The neon green chile has a piquant bite that complements the other fresh ingredients. Alas, the sesame seed buns have a hard time holding in all the ingredients. The French fries are nothing special, pretty much boilerplate.

17 June 2007: For dessert, an absolute must-have is the chocolate cake. A thick slab is easily big enough for two and is as delicious as any chocolate cake you’ve ever had anywhere. The frosting is thick yet not at all cloying as are the frosting in those hideous store-bought Plaster of Paris designer cakes. It’s diet devastating delicious. Other dessert options include baklava and several fresh house-made pies. 3 April 2016: Among the luscious cakes masterfully created by the pastry chef is a lemon cake topped with lemon “salt.” It’s rich, creamy and absolutely delicious with just enough lemony flavor to tickle your tongue.

There’s a reason the Western diner has survived more than sixty years. It leaves enticement to its food and not its facade. That’s the way it should be!