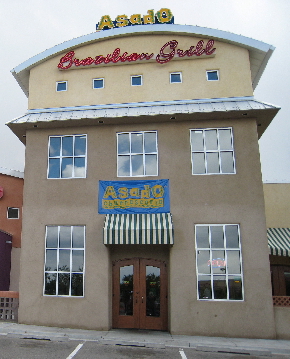 When it comes to diplomatic coups, one of the least known for which President George Herbert Walker Bush is credited is the introduction to the United States of the popular Brazilian Churrascaria (steakhouse) Fogo de Chão (literally Fire of the Ground).

During a visit to São Paulo, Brazil, the 41st President of the United States was so impressed by the unique dining concept that he told the owners a restaurant like theirs would go over big in his home state of Texas where as in Brazil, beef is king.  As one of the first Churrascarias to open in the United States, the Dallas Fogo de Chao helped blaze the way for other Churrascarias throughout the country.

Albuquerque’s Asado was actually the second in the state, launching more than a year after its sister Santa Fe restaurant (which closed in late 2005).  Still a third Asado is located in Evanston, Illinois, just outside of Chicago.

The Churrasco tradition has its genesis in the Pampas, an extensive grass-covered plain in South America east of the Andes Mountains.  Churrasco translates roughly from Spanish to “barbecue,” but to avoid confusion, in the rest of South America the barbecue method of preparing meats is known as Asado.

Brazilian and Argentinean cowboys known as gauchos tended to large herds of cattle in the verdant Pampas, and similar to cowboys in America’s wild west, were often given lesser cuts of beef.  To make it more palatable, the gauchos would roast the beef for hours on wooden skewers over an open flame to tenderize it.

In modern Churrascarias, an all-you-can-eat dining tradition has emerged.  Servers come to your table with a skewer on which are speared several kinds of meat.  All courses are served sizzling right off that skewer and plated right onto your table.

Accommodating servers bring one meat after another until you say “nao obrigado”–no, thank you.  Not literally.  Each table includes a “cue” which tells your servers where you stand.  The green side reads “sim por favor” or “yes, please” indicating you want more selections brought to your table while the red side of the cue indicates you’re done.

From a visual perspective Asada is almost over-the-top with something to see at every turn. One of the first things you see at this sprawling open restaurant are rotating spits on which meats are being prepared.  It’s an Adkins dieter’s dream.

Standing atop the salad bar is a large cow, more like the golden calf fashioned by goldsmiths in the Ten Commandments movie than the cow you sometimes see atop American chain steak restaurants.  The cow is positioned almost directly below a chandelier from which hang monkeys, parakeets and other wildlife from the Amazon.  Its horns are adorned with grapes.  Could it be symbolic of the gluttony and lust of diners who take all-you-can-eat seriously?

The multi-hued walls are festooned with (to say the least) interesting art, some bringing to mind something Picasso might have painted in a drug induced fit of creativity.

Against one wall is a large wrought iron sculpture of a musical scale set against a colorful mosaic of tiles.  The sound of rivulets of water cascading down this art piece might lull you into a state of content relaxation were it not for the constant din of activity.

Lively Latin music, not all of it traditional Brazilian samba, resounds through the restaurant’s speaker system.  The ambiance is certainly intended to be festive and inviting.

After your server takes your beverage order, two dinner plates are brought to your table along with tongs for each diner.  These tongs are used for removing meat from the skewers or serving tray.  An indicator that the meats are tender is the absence of a true steak knife.  Instead, a fork and a simple table knife serve as your dining accoutrements.

The salad bar offers only cold salad and fruit options, but this is far from your typical salad bar.  Some of the salad offerings are terrific.  One salad features garlic cloves, sun-dried tomatoes and salty, pitted olives.

You can also treat yourself to any of several macaroni salads, potato salad and even cold nibblets of corn, creamed peas and green beans.  Vegetarians will like the salad bar as much as carnivores will appreciate the meat offerings.  Omnivores will benefit from a great assortment of both.

Shortly after you dispense with your salad, Asado’s servers begin a parade to your table with skewers of well-seasoned meats.  Even if not all the meats make it to your table, it’s unlikely most people would be able to sample more than one of each.

Each portion is pre-cut, some to bite size while other pieces will challenge you to finish them in three or four bites.  A commonality among the various meats is tenderness. Most are served at about medium well even though the outer layers may be a bit on the charred side.  Most meats are juicy and well-seasoned, albeit perhaps a bit on the salty side.  The fennel-kissed sausage would go well on a pizza while the pink ham paired with glazed pineapple might remind you of a holiday meal.

Asado, in concept and in execution, is a fun restaurant sure to please all but the most discerning and finicky of diners.