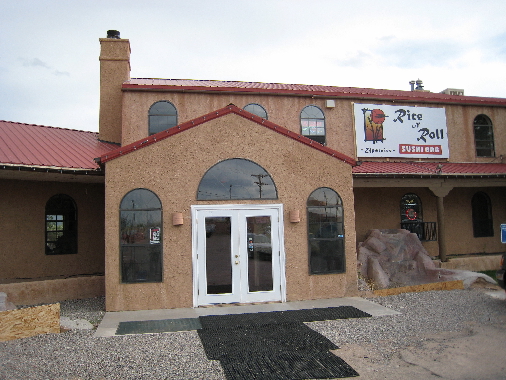 The 1970s have been characterized by writer Tom Wolfe as the “Me Decade” and derided by cynics as the “Disco Era.” It was an era of contrasts: the national crisis of confidence described by President Jimmy Carter as a “malaise” and the ubiquitous yellow smiley face; the melodic, velvety stylings of the Carpenters and the edgy, funky beat of disco; an explosion of copycat fast food chain restaurants and the introduction of innovative fusion cuisine in many contemporary restaurants.

Still other restaurants had their own ideas as to what constituted fusion cuisine. The now defunct Maverick Cafe in San Antonio, Texas, became famous for their “East Meets West” dining concept. It wasn’t so much a fusion of cuisines as it was the plating of different cuisines (Mexican and Chinese) on the same salver.

The very best lemon chicken I’ve ever had, in fact, was at the Maverick Cafe in 1994, served in a combination plate with enchiladas. I fondly recall using my tortilla as a “New Mexican spoon” to scoop up both the tart lemony chicken and the piquant red chile though not at the same time.

Think about it. The piquant bite of capsaicin imbued salsa and the earthy hot mustard-like heat of wasabi in one restaurant–it just makes sense, especially if you’re craving both New Mexican and Japanese cuisine, but not one over the other.

East finally did meet West (well, really Southwest) in Bernalillo when the top floor of the Coronado restaurant became Rice N Roll, a clever play on words sushi bar. Now you can have salsa and sushi at one place, even on the same plate if you wish.

In truth, you can’t order New Mexican food upstairs at the sushi bar, but if you dine downstairs at the Coronado restaurant you can order sushi. Rice N Roll opened in March, 2007 and has been doing very well, particularly on Wednesday and Thursday nights.

During our inaugural visit on a blustery May day, Kim wanted the warm comfort of salsa, chips and green chile stew while I craved the burning sensation of wasabi on a spicy tuna roll. We were not disappointed in either count.

As with most sushi bars, the menu includes both nigiri (vinegared rice combined with a topping or filling of fish, seafood, vegetables, or egg) and maki (rolled sushi, which includes sashimi, rice, and nori (dried seaweed) among other ingredients) style sushi.

The menu categorizes sushi offerings as fresh (Nigiri), roll (maki), cooked, roe, vegetarian, sashimi and specials (such as sea urchin and halibut). A slate board includes other chef’s specials including a few invented by the chef himself. These tend to be almost twice the price of the standard menu offerings.

Appetizers include edamame (large green vegetable soybeans), green chile tempura, baked green mussel and other sushi bar standards. The soft shell crab salad (pictured above) is a simple, but excellent option: tempura batter fried soft shell crab, ribbons of cucumber, iced daikon radish and a sweet, piquant spicy mayonnaise. Fortunately we had some of the tortilla left over from our green chile stew to sop up the remaining mayo which was quite delicious.

Though several of the slate board specials will catch your eye, the New Mexico Surf and Turf Roll will certainly prompt questions. The name is apropos. Nestled within the vinegared rice is fresh pink crab and a bit of green chile while the topping is seared rib eye with a smearing of spicy mayonnaise.

The New Mexico Surf and Turf Roll is a reminder that the Japanese word sushi does not mean fish. Rather, it represents any vinegared rice dish. More importantly, it’s a delicious maki roll, one we’ll certainly order again.

Plating is an eye-pleasing art form. Everything is where it should be for optimum harmony, balance and appearance. The balance of color, texture and appearance gives diners pause to reflect on how great everything looks.

Not every piece of sushi quite lives up to its appearance, but on balance, you won’t be disappointed…and if you’ve got the room, what can possibly be better after a meal of good sushi than some New Mexico sopaipillas with honey. Best of all, you won’t have to leave your table to have that.