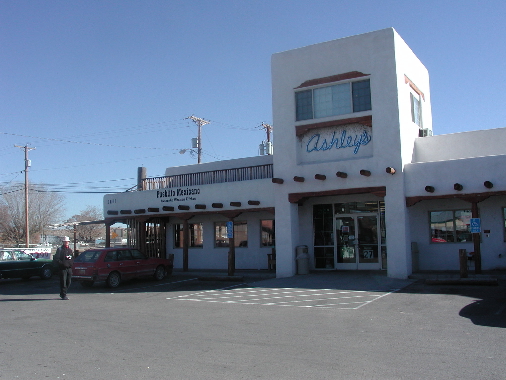 Even onto the 21st century the distinction between Mexican and New Mexican cuisine has been somewhat obfuscated. Restaurants which serve cuisine we recognize as uniquely New Mexican (characterized among other things by the use of piquant red and green chiles instead of jalapeno) bill themselves as Mexican restaurants. The situation is exacerbated by ancianos (New Mexico’s elderly population), many of whom refer to their cuisine as “Mexican.”

While many New Mexican restaurants errantly bill themselves as Mexican, neither their menus nor their accoutrements do little to clarify the distinction. That isn’t the case at Pueblito Mexicano.

First of all, the trappings are uniquely Mexican–from the watermelon colored walls to the clay fired pottery strewn throughout.

Secondly, the proof is in the eating. The food at Puelito Mexicano is most assuredly Mexican. While there are many commonalities between New Mexican and Mexican food, there are just as many dissimilarities. Not all New Mexicans seem to grasp that and some complain vociferously rather than celebrating the differences.

When I waste time whining that too many New Mexicans don’t appreciate or understand the differences between authentic Mexican and New Mexican cuisine, my dear wife reminds me that in the end, it’s whether you like the food or not that really matters. We really liked Pueblito Mexicano.

The specialty of the house at Pueblito Mexicano appears to be burritos with eighteen different burritos on the menu. Gigantic (albeit paper-thin) tortillas enveloping a variety of ingredients are on the tables of every diner you’ll observe as you walk into the restaurant. There are breakfast burritos as well as anytime burritos and they are all profuse, brimming with ingredients and topped with red chile and melted Cheddar (not Mexican white cheese as we might have expected) cheese.

The burritos are not only humongous, they are delicious. The carne adovada burrito has very little bite al estilo Mexicano (in the Mexican style). The shredded pork was tender and delicious, albeit with a slight acidity you don’t always get with New Mexican style adovada.

The Pueblito Platter is the restaurant’s sole combination platter, featuring a taco (shredded or ground beef or chicken); a cheese, chicken or beef enchilada and a red chile pork tamale served with rice and beans. The flavorful ground beef taco is served in a grease-laden, soft corn tortilla similar to the tacos you might find in Las Cruces. I ordered my combination platter with a ground beef enchilada topped with “green chile.” The green chile (a New Mexican spelling) is made Mexican style with a jalapeno and tomatillo base. Though somewhat more piquant than the red chile on the masa heavy tamale, it wasn’t nearly as hot as you’ll find at most New Mexican restaurants.

On the chilaquiles, however, the green chile is firecracker hot. Chilaquiles is a traditional Mexican dish consisting of fried tortilla chips bathed in red or green salsa and usually with a cheese topping. At Pueblito Mexicano, the chilaquiles are served with two eggs and bacon, but unless your tongue is coated with asbestos, you’ll want something to cut the piquant heat. Pancakes are a good option. We’ve never had hotter chilaquiles.

Another Pueblito specialty are gorditas, a popular Mexican “sandwich” comprised of a small, thick masa (corn flour) tortilla engorged with beans, lettuce, tomato and beef. Gordita which means “little fat one” in Spanish are baked on a comal, just like tortillas, but may remind you more of pupusas, the national snack food of El Salvador.

Pueblito Mexicano serves Coke bottled in Mexico which has more carbonation (overflying birds beware) than its American counterpart and Fresca, the popular 70s grapefruit flavored soft drink. Better still, a selection of Jarritos is also available. Jarritos is the most popular Mexican soft drink made with natural fruit flavors and with less carbonation than American soft drinks. Also available is horchata which is sweeter even than the pancakes on the menu.