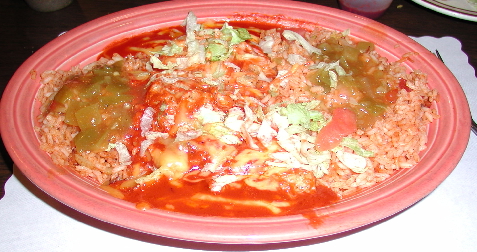 In February, 2003 after the death of its founder and proprietor Frank Barela, four Cuates employees struck out on their own and launched Dos Amigos at the site of a former Village Inn dining establishment just off the I40 freeway. Four years later they moved clear across town to Juan Tabo and changed the restaurant’s name to Mis Amigos.

A framed photograph of Barela (pictured at left) attired in an Air Force flight suit hangs prominently in the restaurant’s wait area. Fittingly, the photograph’s caption refers to Barela as “our friend and guardian angel.”

Barela isn’t the only hero honored on the Mis Amigos wall of honor. Framed photographs pay loving tribute to several Bernalillo County deputies and Albuquerque city police officers who, in recent years, have lost their lives in the selfless performance of their duties. Letters of commendation to owners of Dos Amigos speak to the county’s and city’s grateful appreciation for their generous contributions to law enforcement. That speaks volumes!

If imitation is the most sincere form of flattery, then Los Cuates should feel richly complimented. The many similarities between the two restaurants start with their names. While “Cuates” translates to “twins” and “Amigos” translates to “friends,” it’s not uncommon in New Mexico to hear the word “Cuate” be used to refer to a “friend.”

The similarities continue with the honey sweet and chile hot salsa for which Los Cuates has long been known. The salsa is indeed unique–wholly unlike the traditional New Mexican salsa of tomatoes, onions, garlic and either green chile or jalapenos. Alas, it’s not served in bowls like salsa at most restaurants. Instead, it’s doled out in small plastic containers like those used to dispense medicine at hospitals. You’ll be asking for seconds on this salsa.

Mis Amigos salsa (just as at Los Cuates) is based on ancho chiles (known as chile pasilla in the Michoacan area and in California), an aromatic, brownish red chile that smells somewhat like prunes and has a mild, rich and almost sweet taste with just a hint of residual bitterness.

It’s an “either you love it or you don’t” type of salsa with plenty of fans and detractors. Count me among those who love the uniqueness of this pre-prandial treat. There didn’t appear to be any discernable difference between the Mis Amigos version and the salsa at Los Cuates, but as if for one-upmanship, the Amigos also provide an even more piquant green chile salsa.

Amigo’s chile con queso is easily among the best in the city with unmelted shredded Cheddar complementing its melted brethren. The guacamole is a bit “pasty” and not garlicky enough for me. Both the con queso and the guacamole are served in tortilla “bowls” which you can consume after you’re done with the contents within.

The true test for me was whether or not Los Amigos enchiladas were comparable to those served at Los Cuates. That means enchiladas with the most savory chicken in town and in two of our first three visits, Dos Amigos passed the test.

The large enchilada plate features tree enchiladas with your choice of beef, chicken, cheese or any combination thereof. Put a fried egg on top, add beans and rice and you’ve got the quintessential New Mexican enchilada plate.

At many New Mexican restaurants, an enchilada or sopaipilla stuffed with chicken means desiccated, almost flavorless chicken of mostly dark meat. Not so at Dos Amigos where the chicken has the moistness and tenderness of a stewed chicken.

Even better than the standard enchilada plate are blue corn enchiladas served flat and with the requisite chicken. Mis Amigos’ red and green chile aren’t especially piquant, but both are flavorful. Dinner plates include a passable Spanish rice and refried beans covered with a canopy of cheddar cheese. The beans have that great lard prepared taste New Mexicans love.

I mentioned above that in two of our first three visits Mis Amigos’ chicken enchiladas were on par with those at Los Cuates. The restaurant must have had an off night on our third visit because there was a minimal amount of chicken on my blue corn enchiladas. I should have known that if I wanted a lot of that wonderful chicken, I should have ordered the stuffed sopaipillas which are engorged with this delicious poultry.

Each dinner order is accompanied by two sopaipillas on which you’ll want to slather honey. Don’t wait until they’re cold or you’re too full to eat them.

The walls at Mis Amigos include several murals, including one of La Virgen De Guadalupe, patron saint of the Americas.

Note: the picture above is of Bernalillo County deputy James McGrane who was killed on March 22nd, 2006 while making a traffic stop. Also pictured are Albuquerque police officers Michael King and Richard Smith who lost their lives on August 18, 2005.

Someday, Mis Amigos will no longer be spoken of in the same breath as Los Cuates. Based on our first visits, we have a feeling that day is fast approaching.