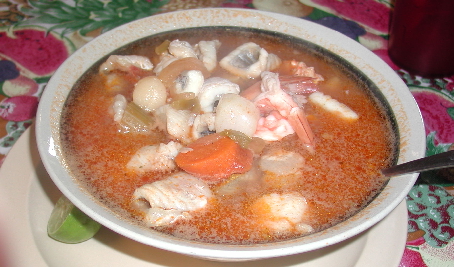 Fortunately the matador motorist mentality so commonplace in Mexico’s fourth largest city isn’t something you’ll encounter on Bridge. Instead of vehicles which look as if they’ve participated in one too many demolition derbies, you’re more likely to meet up with a procession of highly buffed pick-up trucks with gleaming chrome wheels and mega watt stereos.

Some of the most attractive trucks in town are parked in front of restaurants other people might classify as “dives.” Their drivers, modern-day caballeros, are typically attired in exotic snake or animal print boots, equally exotic belt buckles, creased blue jeans and cowboy hats. These guys know where to find great food.

If you’re an aficionado of authentic Mexican cuisine, follow (but not too closely) the cavalcade of these high-performance, macho machines at around lunch time. Their destinations are generally delicious. Several clusters of Mexican restaurants throughout Bridge Boulevard offer the type of dining experience you usually have to cross our southern border to have. These are restaurants in which it pays to be proficient in Spanish. El Siete Mares (literally “the seven seas”) Restaurant is such an eatery.

Like other mariscos (seafood) restaurants, the decor at El Siete Mares has a nautical theme with several murals depicting life on the sea. A large blue marlin hangs ominously behind one table while an aquarium teeming with exotic fish is stationed behind another table. Interestingly the restaurant’s walls include almost as many framed photographs of racehorses as it does sea life.

You won’t be seated long before complementary salsa and chips are delivered to your table. The chips are crisp and low salt while the salsa is replete with chunks of white onion, chopped tomato and potent jalapeno. It, too, is low salt, but it’s also quite good.

The menu includes a variety of Mexican mariscos entrees as well as other traditional favorites. What it doesn’t include is horchata, the increasingly popular rice drink. Instead, you can have your choice of Jarritos beverages.

One not-to-be-missed appetizer is the ceviche tostada, a crispy corn tortilla on which is piled a boatload of seafood (shrimp, crab, fish) and fresh vegetables (lettuce, tomato, cilantro) and a smear of guacamole. It’s a bit more pricy ($6.50) than at some Mexican eateries, but it may be worth it. Squeeze a couple of limes on the tostada and you’ve got yourself a tangy, briny and delicious pre-prandial treat.

You’ll find Caldo Siete Mares (Soup of the Seven Seas) at many mariscos restaurants so it stands to reason that a restaurant bearing the name Siete Mares would serve a very good version. The Caldo Siete Mares (pictured above) is laden with seven different types of seafood including shrimp, crab, clams, squid and fish in a hardy broth that includes carrots, rice and tomatoes. You can add lime and the requisite hot sauce if you’d like, but this soup needs absolutely no help. It’s brimming with flavor without being overly salty (a problem for this particular soup).

Non-seafood eaters will find an assortment of carnivore pleasing entrees on the menu. These include steak Tampiquena, a thin slab of grilled beef covered in grilled onions and red chile. The beef is slightly tough and more than a bit fatty, but it’s also quite palatable and is accompanied by cheese enchiladas covered in a red chile sauce.

You don’t have to cross the Rio Grande into Mexico to have a genuine Mexican restaurant experience. El Siete Mares is delicious proof of that.