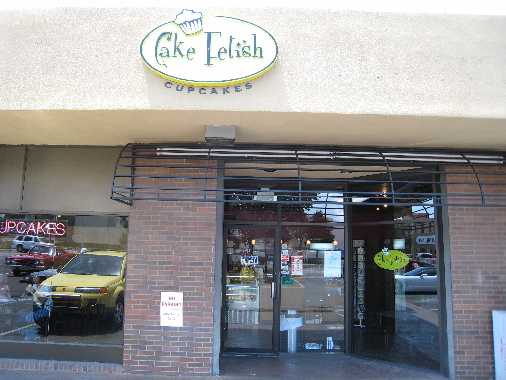 Americans are absolutely food obsessed!  It’s become alarmingly obvious in our culture of caloric overachievers that few of us miss any meals.

It’s also telling (yet seemingly innocuous) that many of the terms of endearment we use for one another are related to food.  Terms such as honey, sugar, pumpkin and others are regularly used by sweet talking lotharios of both genders.

One term of endearment which has grown out of fashion is “cupcake” which in today’s vernacular refers to a woman whose front and back body fat hangs over the waistline, giving the woman the “top of the cupcake” look.

While “cupcake” may have become an intended compliment which will get your face slapped, cupcakes themselves have been reestablished as a cool, viable and in-demand dessert option.

The innovative Slate Street Cafe may have reinvigorated the “cupcakes as dessert” trend in Albuquerque, but with the March, 2006 launch of Cake Fetish, “Cupcake Carrie Mettling” (formerly an architect) took it to the next step.  Her tiny gourmet cupcake bakery celebrated all great things cupcake with a luscious line-up of colorful (and colorfully described) cupcakes of all varieties, each one seemingly more delicious than the other.

Note:  In 2007, Carrie sold her business to Ron and Caryn Koerner who will hopefully maintain her uncompromising standards for quality and freshness.

Cake Fetish’s to-go menu defines fetish as “an abnormally obsessive preoccupation or attachment; a fixation.”  While that definition may have been intended to describe her labor of love in crafting confectionary perfection, her patrons may find themselves cupcake obsessed, too.  Her cupcakes are absolutely addictive!

The cupcake menu features a selection of twelve different cupcakes available every day at the bargain price of $1.75 each or $10 a dozen.  You can also get a dozen “mini” cupcakes (about the diameter of a silver dollar) for $6.50 a dozen.  You’ll be hard-pressed to choose which ones to try first and will undoubtedly make return visits to ensure you haven’t missed something truly special.

Culinary historians know that the Mayans were marrying chocolate and chile creations centuries ago, but it’s unlikely they ever crafted anything quite as wonderful as the Hot Chocolate cupcake, a chocolate cake dipped in chocolate ganache with a kiss of red chile infused butter cream.

The red chile sneaks up on you and gives the chocolate an unexpected flavor explosion.  If New Mexico’s state legislature ever decides to name an official state cupcake, this one should be it.

If citrus producing Florida named an official state cupcake, perhaps it should import the Creamsicle and lionize it as a wonderful representation of the freshness you’ll find in the state’s oranges.  The Creamsicle is adorned with vanilla and orange swirled French butter cream.  You’d swear you were eating a Creamsicle were it not for the fact that this cupcake isn’t served off-the-freezer cold.

My other early favorite is called the Inside-Out German Chocolate.  It’s made with coconut and pecan icing then crowned with chocolate French butter cream and toasted coconut.  If you’re an aficionado of German chocolate cake, you’ll be besotted by this wonderful cake.

Cake Fetish has been feted with numerous awards including best cupcake honors from both the Alibi and Albuquerque The Magazine.  Google it and you’ll find a surprising number of bloggers waxing poetic about this wonderful restaurant.

Your dogs will also go wild over Cake Fetish’s cupcakes for dogs.  Available in several canine pleasing flavors, they’re miniature, dog tried and tested versions of the human kinds.  Just don’t stand between your canine and his or her cupcake.

In an era in which the word “fetish” itself has connotations of deviance, it’s refreshingly delicious to know that the word can be applied to something as wonderfully delicious as cupcakes.